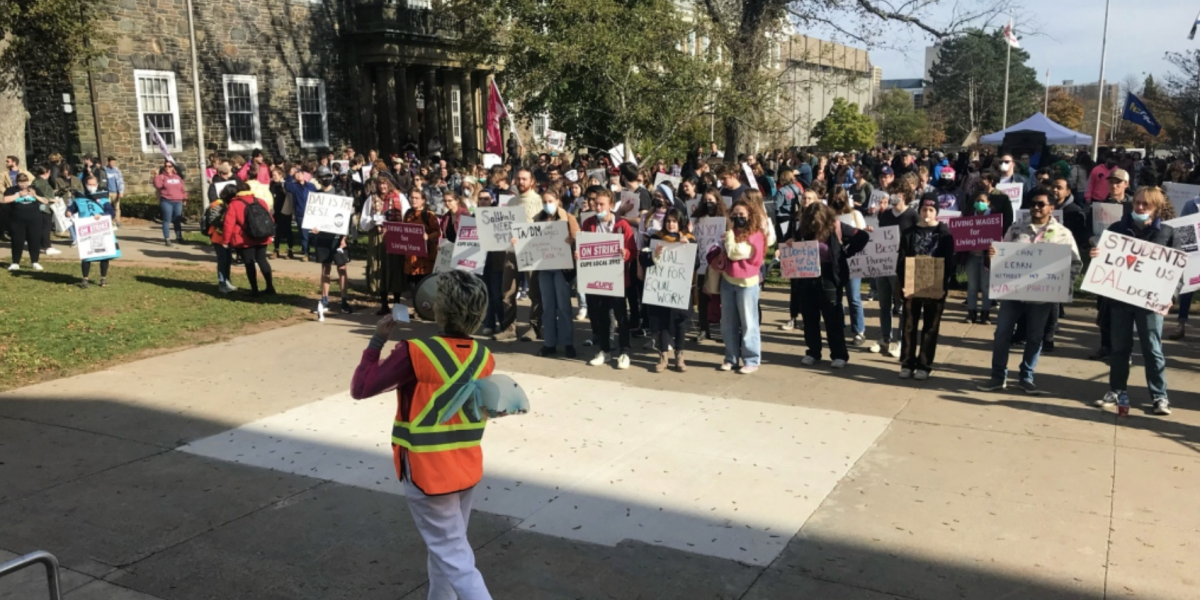 Student support is growing for the teaching assistants, part-time instructors, demonstrators and markers currently on strike at Dalhousie University. The striking workers, represented by CUPE 3912, have been on strike for over two weeks fighting for better wages. This past week, the university finally returned to the bargaining table, and while there was some movement on wages, the university refuses to pay Dalhousie academic staff wages that are on par with other Canadian universities.

CUPE 3912’s demands for fair wages are being fervently supported by both the Dalhousie Student Union (DSU) and the Kings’ Students’ Union (KSU), who collectively represent all students impacted by the strike.

“Living wages and fair working conditions for our academic workers are essential for an exceptional student experience as identified in Dalhousie University’s recent Strategic Plan,” says a statement from the DSU from September, long before the strike started.

Solidarity between students’ unions and labour unions is important to fight the constant attacks on education. Whether tuition fee increases, cuts to departments, or worsening working conditions, students and workers have common cause. But in this case it’s especially important because many people on strike are both students and workers, and thus members of both the DSU and CUPE 3912.

From petitions to walks outs

Last Monday, hundreds of students showed their support by joining a campus rally in support of CUPE 3912. Organized by students, the rally encouraged people to walk out of class to show support for the workers on strike. At least one class of graduate social work students walked out of class on Monday to join the rally.

Amanda Kelley, a CUPE 3912 member and social work student, says that she has seen her peers take action in a variety of ways in support of the striking workers. Kelley says some students have taken an approach that is “a more quiet revolution” including signing the CUPE 3912 petition, sharing social media posts, having difficult conversations with colleagues or offering to buy a coffee for a striking worker on a cold day. But other students are taking more disruptive action.

“For those particularly inclined to use their positions of power, they have been louder and more intentionally ‘disruptive’. These students are choosing to walk out of classes consecutively, stand the picket, rally students to participate in collective actions, and emailing Administrators on a daily basis,” says Kelley. “[Both types of action’ have been and will continue to be indispensable in the CUPE 3912 solidarity efforts and illustrates a beautiful dynamic of students giving what they can, where they can—truly being in solidarity with one another,” adds Kelley.

Solidarity with striking workers has also come from a wide-ranging and growing number of campus clubs and community groups.

Department groups representing students in psychology, social work, marine biology, law, health and human performance, and planning, have released statements in support of CUPE 3912, focusing on the importance of decent wages for all academic workers.

Campus community groups including the Nova Scotia Public Interest Research Group, the Loaded Ladle, Divest Dal, the South House Centre for Gender Justice, the Dalhousie Sustainability Office, and DalOUT have also publicly supported the strike, in many cases making the link between living wages and other social justice issues on campus.

Support has also come from workers at other institutions facing similar conditions. “We are fellow precariously employed academic workers and the call for fair and livable wages resonates with us! We resolutely add our voices to the call for wage parity and living wage compensation for CUPE 3912 members at Dalhousie,” reads a statement from the Masters of Fine Arts (MFA) students from the Nova Scotia College of Art and Design.

Faculty, staff and graduate students in the Dalhousie School of Social Work released an open letter to all social workers unequivocally stating, “Social workers have an ethical obligation to stand in solidarity with CUPE 3912 workers.”

The MLA representing Dalhousie, Lisa Lachance, brought the issue to the floor of the legislature as well, and the local unionized worker’s co-op the Glitter Bean is even offering CUPE 3912 members a discount on coffee during the strike.

Dr. Kevin Hewitt, an associate dean in the Faculty of Science even brought attention to the plight of CUPE 3912 members as part of his address at the fall convocation for graduates from the faculties of management and science last week.

At last week’s rally, students chanted “Students Lose if Dal Wins” showing that they know that the key to ending the strike is for workers to win and get the fair wages they deserve.

Dalhousie was back at the bargaining table briefly last week, showing they are concerned about the mounting pressure from students. As long as student and campus solidarity continues to build, workers at Dal will win their fight.