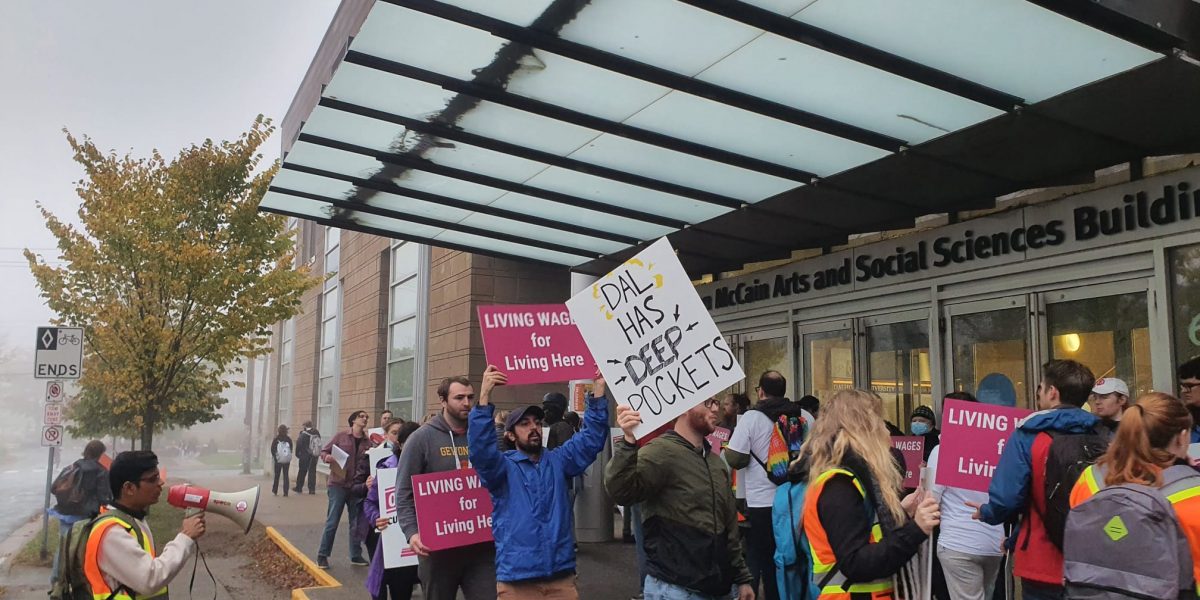 Over 1500 academic workers are on strike at Dalhousie University.

The striking workers include part-time faculty, teaching assistants (TAs), markers, and demonstrators at Dal – all members of the Canadian Union of Public Employees (CUPE) Local 3912. The previous collective agreement between Dalhousie University and CUPE 3912 expired on August 31, 2020. For the duration of the strike, CUPE 3912 members will not be doing lectures, tutorials, meeting with students, or marking.

The strike was called because the Dal administration has refused to offer fair wages and working conditions. The latest offer from the employer includes wage scales that do not keep up with current rates of inflation, and would effectively result in a decrease of income for already precarious workers.

Currently, part-time faculty at Dal are paid much lower compared to other members of the U15 Group of Canadian Research Universities, over $2000 less per course than they would at The University of Western Ontario. TAs at Dal are paid $24.41 per hour, whereas TAs at Western have been earning $48.12 per hour starting in 2019. Dal has also been splitting TA positions into Marker and Demonstrator contracts that pay $16.61 per hour – far less than what is needed to afford basic living costs in the Halifax region.

Dr. Gabor Lukacs, the Communications Officer at CUPE 3912, says that the union executive “has heard from members who are going to food banks because they cannot afford groceries anymore, and members who are worried about paying rent and who have been ‘renovicted’.”

Lukacs says that income disparity is the main issue at the bargaining table, “our members were already badly underpaid three years ago compared to their peers at other comparable Canadian U15 research universities. With inflation on top of that, our members’ situation has become untenable.”

Ellie Weise is a TA in the Department of Biology at Dal and a member of the CUPE 3912 negotiating committee. Weise got involved in the union and supports the strike because of how the Dal administration has been using Marker and Demonstrator contracts to pay people less than what they should be getting with TA contracts. Weise explains that Markers and Demonstrators were intended to be separate positions, each paid at $16.61 per hour for a supposedly lower workload. However, Dal administration has had people sign contracts to work as both Markers and Demonstrators at once, effectively doing the same work as a TA for about $8 less per hour. The only way to fix that problem, according to Weise, is to get rid of that loop-hole entirely.

This is a main reason the union is striking. Lukacs explains that the union is fighting for three basic demands: 1) for pay raises that compensate for inflation and match other Canadian research universities; 2) to equate the pay of Markers and Demonstrators to those of Teaching Assistants; 3) to ensure that members are getting paid for the actual number of hours they have worked, and not being pressured to work additional hours for free on top of their contracts. By not addressing these basic needs, Weise and Lukacs say, Dal has given CUPE 3912 members no choice but to go on strike.

Meanwhile, Dal President Deep Saini received a salary increase of 13.4 percent in 2021-2022, up to $558,154 from the $492,001 he received in 2020-2021. According to the public sector compensation reports for those periods, there has been an average salary increase of 7.9 percent for those already receiving over $100,000 annually at the university. While administrators and senior staff receive massive pay hikes, they are forcing some of the most precarious workers at Dal to go on strike to keep up with the rising cost of living.

The Dalhousie Student Union (DSU) has affirmed its solidarity with members of CUPE 3912 in a public statement. The DSU calls on Dalhousie University to meet the union’s demands for living wages and fair working conditions for academic workers. Representing over 20,000 Dal students, the DSU statement describes how they have more in common with members of CUPE 3912 than they do with Dal administration: “Working conditions for our academic workers define learning conditions for students but neither have been reflective of skyrocketing costs of living and tuition fees.”

Lukacs says that most members of CUPE 3912 are also Dal students, and that tuition hikes enable the employer to take back in tuition what the union gains in wages. Earlier this year, Dal announced a 3 percent tuition increase for 2022-2023, continuing several years of steady tuition increases in Nova Scotia. In the recently proposed international tuition model, Dal is set to increase international student tuition fees by as much as 37.5 percent between 2022 and 2024 alone. These tuition increases will effectively be a pay cut for already precarious workers, most severely impacting those from outside of Canada.

Fighting for social justice in the workplace

As a TA at Dal, Weise says the university is part of ‘The Leaky Pipeline’, a phenomenon where people in oppressed groups are forced out of further stages of academic work. Groups of earlier stage academic workers tend to be more diverse, Weise says, and groups become less diverse toward further stages of academic work. Research from the Association of Nova Scotia University Teachers (ANSUT) and the Canadian Association of University Teachers (CAUT) shows that women and people of colour are overrepresented in the precarious academic workforce.

“As a union, we are most united in our precarity… And our love of teaching, but none of us are paid well for it” Weise says. To begin to address The Leaky Pipeline and make academia better for everyone, Weise explains, Dal needs to meet the union’s demands for liveable wages and fair working conditions – but this will not happen without a fight: “The only way to make that happen is to strike. Because then your value in the workplace is right in front of them, and that’s the only way we can make this better.”

How to support the strikers

Aparna Mohan, President of the Dalhousie Student Union outlined a few ways to build solidarity with the strikers: