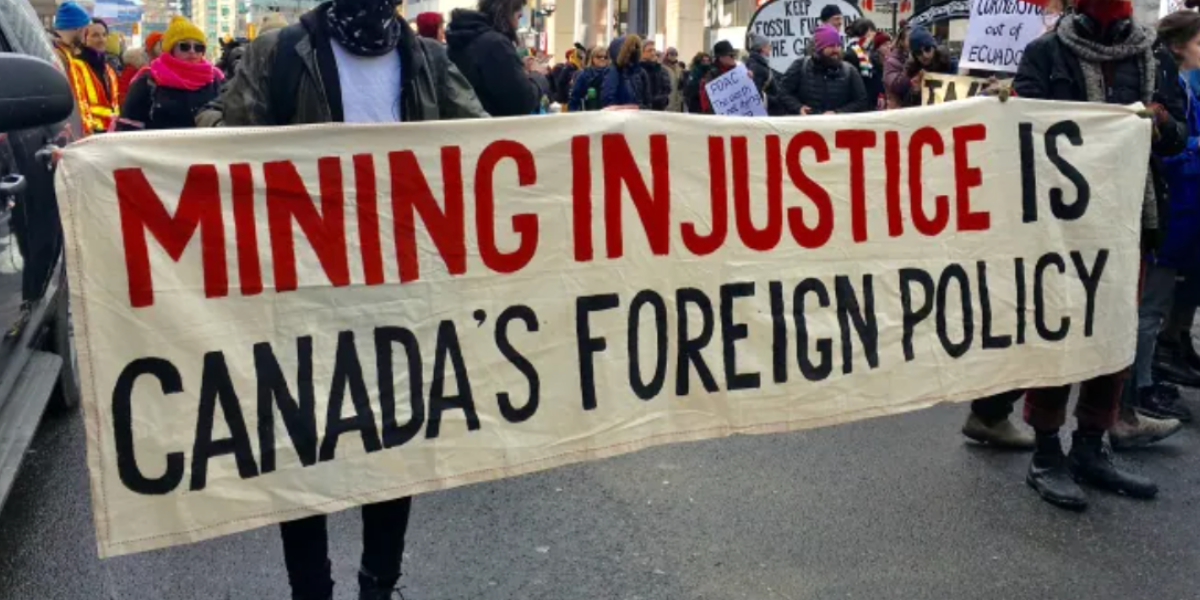 The Prospectors & Developers Association of Canada (PDAC) is a non-profit organization funded by the mining industry. It holds its annual convention in Toronto and the is the world’s biggest mining convention. It’s been taking place for 85 years, and about 25,000 people attend, with representation from both corporate and government sectors.

In recent years it has been publicly exposed and opposed by grass-roots organizations, including the Mining Injustice Solidarity Network (MISN). This year, all who oppose the destruction of the environment and exploitation of communities committed by mining companies should join the flash mobilization to be held Monday, June 13, 11:30 a.m., at Simcoe Park, 240 Front Street west, Toronto, right across from where the convention is being held. Spring Magazine spoke with MISN members Sydney Lang and Emily Green.

Why are Tkaranto area activists putting a priority on the PDAC conference?

Emily: For the last few conferences MISN has assembled a coalition of opposition. This process is a way to think about how mining intersects with so many other issues, for example Indigenous sovereignty, and how that’s central to climate change and climate justice. We also look at immigrant rights and the way the violence of these companies reinforces exploitative systems that create refugees and more violence in the world. So our focus on PDAC is a way to see how MISN can also connect with other groups with other issues and see how we can network and build relationships. Sometimes working in MISN can feel a bit abstract as I’m not immediately impacted, so going into the convention centre makes it very visceral.

Sydney: A lot of people don’t know Toronto is a major mining hub and that PDAC happens here every year. So we reveal how much power Toronto has and how much power Torontonians have. If people realize how horrible these companies are and that they’re meeting in Toronto,  people living here can learn about our theme of corporate criminals and villains.

What is greenwashing and why the focus on it?

Sydney: Greenwashing is when a company uses its resources to market itself as environmentally friendly and not acknowledge its actual environmental record. Companies use the words “clean” or “green” on their harmful products. The mining companies doing this say they meet certification requirements, like those under the Initiative for Responsible Mining Assurance; they use language like Environmental, Social and Governance (ESG) and Corporate Social Responsibility (CSR) to appear from the outside to be sustainable enterprises. But their operations are inherently destructive to the environment. The process of mining releases a lot of carbon emissions in itself. So when we resist PDAC, we’re responding to how the mining industry is greenwashing its operations. A perfect example is how companies frame themselves as the solution to climate change but will be using minerals in the Ring of Fire (RoF) in northwestern Ontario to “create green energy”. But this will require so much new mining for the minerals required for electric. We’ve been talking to people about just transitions for workers and critiquing solutions based solely on new “green” technology that maintains business as usual, relying on electric vehicles, not reconsidering the entire transportation infrastructure.

Emily: MISN is part of a coalition called Friends of Attawapiskat River, working with Indigenous communities in “the breathing lands” around the RoF. The Ford government has created a whole economic plan to be the next big producer of electric vehicles. This involves a multi-billion dollar investment in the RoF for mineral extraction. These are being presented as “green minerals” because they will be used for electric cars. The minerals will be shipped to Ontario’s auto plants that will be converted to electric vehicle production. This sounds good on the surface as a way to reduce carbon emissions. But it is complex because there is no such thing as “green extraction” under capitalism and private industry.

In the RoF coalition, there is a lot of conversation about greenwashing. We feel MISN, as a settler organization in Toronto, has a role to play in encouraging the conversation among urban settlers where too often the discussion gets flattened. I personally feel among our peers and environmental organizations there is a tendency to get into an “urgent” space and you end up with sacrifice zones like the RoF and the breathing lands, which are peat bogs that absorb carbon from the atmosphere.

There is a lot of division among First Nations as to whether to consent and what process they require in order to consent. Some communities say yes, that the current terms of reference leading to an impact assessment agreement is a way the government has come up with is a new process and quite colonial. So the focus on greenwashing came from that coalition and wanting to oppose simplistic “go green cars” slogans.

Can we really find a sustainable future using the same systems that got us into this mess? We especially want to centre the questions “Under whose leadership?, Which Indigenous governance systems are being respected? How are relations between colonial governments and First Nations happening?”

When there is unequal power where Indigenous communities lack potable drinking water, how can any consent be reached when the basic foundations for justice and equity aren’t in place? It feels like a priority because these conversations are being sidelined because of the urgency to stop carbon emissions and slow down the climate crisis, for example “We only have 3 years. We’re out of time”. This is resulting in short-term strategies. So we want to say be more thoughtful about solutions.

Are there any particular Canadian mining companies you want people to know about?

Emily: Yes we have named particular villains. We are creating an app for a walking tour downtown Toronto for later this year so people can learn more about Toronto-based mining companies.

Sydney: Some villains aren’t Canadian-owned but operate here. For example, Wyloo Metals is owned by Australian Andrew Forrest who has a reputation of greenwashing in Australia and treating Indigenous communities horribly. Forrest has another mining company and an investment company, so our friends in Australia have warned us about him as he is a big investor in the RoF. There are lots of stories about his companies in Australia, like Fortescue Metals Group not getting free and informed consent from Indigenous communities or not paying royalties to them.

Pan American Silver is a Canadian company, with operations in Guatemala and Argentina where communities are fighting to save their water from silver mining companies like Pan American. We hear of violence on their territories, and defenders are arrested by police for resisting company operations. The company frames itself as environmentally conscious and Ross Beaty, retired chairman of the board, identifies as a conservationist.

The Royal Bank of Canada is a sponsor of PDAC and lots of folks have been mobilizing against its investment in pipelines.

How can supporters take action before, during and after the PDAC convention?

Sydney: Prior to the convention MISN will be doing a webinar on June 12th at 7 pm with Ring of Fire community representatives, to give a good introduction to greenwashing.

Emily: Depending on your skills and capacity, check out MISN (www.mininginjustice.org). We’ll be holding a new members orientation in the fall, and you can get involved in whatever capacity best suits you.

Sydney: For those in climate organizations, please see how you can bring these conversations into your organizing spaces e.g. to expose and oppose “green “ minerals and to centre Indigenous sovereignty. We see lots of good collaboration between labour and climate, with lots of potential. Workers should tap into conversations about just transitions. The government is talking about this, it’s on the radar. There is space for collaborating and thinking about solutions beyond the system we live in  and to get creative.