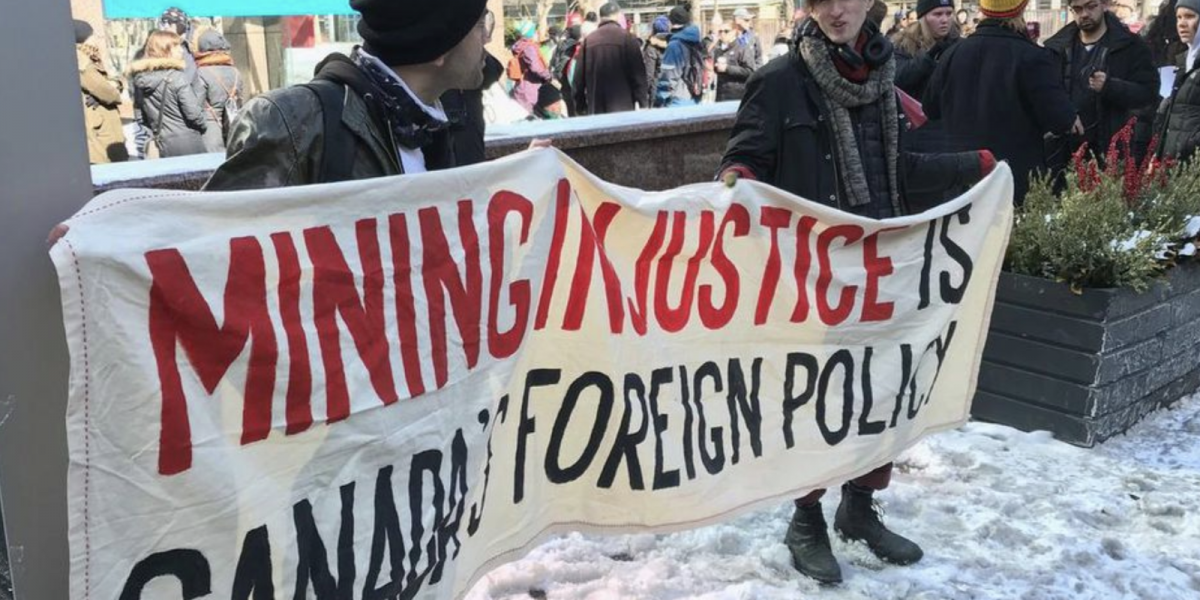 On March 1, close to 400 people gathered outside the Metro Toronto Convention Centre to protest the Prospectors and Developers Association of Canada’s (PDAC) annual convention. This meeting brings together about 25,000 representatives of one of the industries most responsible for environmental destruction and violations of human rights, right up there with the military – in fact, often working together with the military.

Endorsed by 50 organizations, the protest was organized to “stand up to the extractive industry’s violence, ongoing colonization, and complete disregard for the future of life on this planet” according to the organizers’ media release. The event began with speakers and musicians across the street from the convention centre’s main entrance on Front Street. Afterwards, participants went to different building entrances to temporarily close off the PDAC conference.  A few protesters were able to briefly get inside the building and do banner drops, before being “escorted” out by the police.

The rally began with opening words and a water song by Crystal Sinclair, a well-known founder of Idle No More in Toronto. The first speaker was Vanessa Gray, Anishinaabe Kwe Land Defender from Aamjiwnaang First Nation. Gray told Spring, “all of these issues with extraction are all related and impacting Indigenous peoples on all levels. It’s obvious with the genocide that we’ve seen in the news lately, but some of us Indigenous communities deal with chemical exposure on a daily basis and sometimes spills are released. Or sometimes Indigenous people can’t drink their water. These are all interconnected struggles, just as industry is interconnected with governments to work together, to make it possible for these industries to be cross-border. Yet Indigenous people can’t be (cross border).”

Remarking on what it will take to win Gray said:

“To win, it will take solidarity between different movements. I’m hearing more people talk about Wet’suwe’ten territory and how the Canadian government is obviously taking them away from their land, just as they did with us in Aamjiwnaang so many years ago. And now we have the Chemical Valley around us. People should look at it as a violent act on Indigenous people by the government and not look at Indigenous people peacefully holding ceremony on their own territory as a threat. These corporations are powerful, they have military police backing them up. But we have each other. We have the truth, we know we’re right. Just because it’s scary, we do it (protest) because we’re brave enough to defend the future that they are threatening every day. I want to note that some of the companies have been around as long as Canada has, and in Chemical Valley. They have been here for so long but I am still here to speak up against them. I’m only here because our people had to survive Canada’s genocide and we still try to survive even though Trudeau throws words like ‘reconciliation’ around while taking Wet’suwet’en people off their territory and arresting them for holding ceremony and being on their own territory.”

Vale, a “Patron” sponsor of the PDAC event, is just one year removed from the murderous rupture of a tailings dam in Brumadinho, Brazil, which left over 200 dead. During the protest, participants honoured those killed by tying red ribbons to a line, and each ribbon had the name of one of the victims on it.

Barrick, a “Gold Plus” sponsor, is facing a legal challenge from Tanzanian community members who accuse the mining giant of grave abuses including the death of a nine-year-old girl run over by a mine vehicle, the shooting of her stepmother and other women who had gathered around her body, and an attack on a 16-year-old who was shot in the back and beaten by police employed by the mine. These latest atrocities are but the most recent in a long series of egregious acts committed by Barrick and its subsidiaries.

According to the media release of the protest organizers, “With over 60% of mining companies worldwide headquartered in Canada, Toronto has long been the global financial hub for the mining industry. The Canadian government provides unconditional support to the industry including tax breaks, exploration subsidies, a free-entry tenure system in much of Canada,  a climate of corporate impunity, and diplomatic pressure towards the creation of militarized warzones to ‘secure’ the area surrounding extractive projects. On behalf of its mining companies, the Canadian government actively lobbies for free trade agreements and mining codes that diminish labour rights, negate Indigenous consultation requirements, reduce environmental standards, and lower taxes and royalties paid by the company to the government, ensuring that human rights always take a back seat to the rights of capital.”

Brian Young, from Toronto 350, said “Mining is outdated, causing more damage to the planet than any creature can bear. That’s why I’m here today. It’s heartening to see all the organizations that are working together now. We used to be much more in silos. In rallies supporting the Wet’suwet’en and Tyendinaga, it’s been wonderful. To win, we can’t continue the way we have and still be able to live on this planet.”

Greg Luca, from FridaysforFutures, told Spring he joined the rally “because these industries are very destructive. Protests are needed to bring in better laws. I need to protest and this is probably one of our better ways to get seen because PDAC is massive, the world’s largest mining convention. People need to band together and protest; that’s the only way we will win.”

Rachel Small of the Mining Injustice Solidarity Network told the crowd “The entire world has been watching the struggles of the Wet’suwet’en nation and their refusal to allow their territory to be invaded by the RCMP in the service of a pipeline.  The state has always replied with militarization, for us to put down Indigenous struggles. And this is the same violence that is directed at communities around the world by the Canadian extractive industry. At the convention they’re giving each other awards to celebrate each other’s greenwashing and ‘charitable’ efforts.  Three quarters of the mining industry is Canadian, and also at the conference are the financial and public relations companies that support this industry.”

As noted in the organizers’ media release, “We won’t let Canada and the extractive industry at its helm continue to propel us towards a planet that is unlivable! We demand an end to all extractive violence that enables colonization of Indigenous land, forced displacement, violent repression, and wide scale contamination of land, water, and air. And that starts with disrupting PDAC today.”