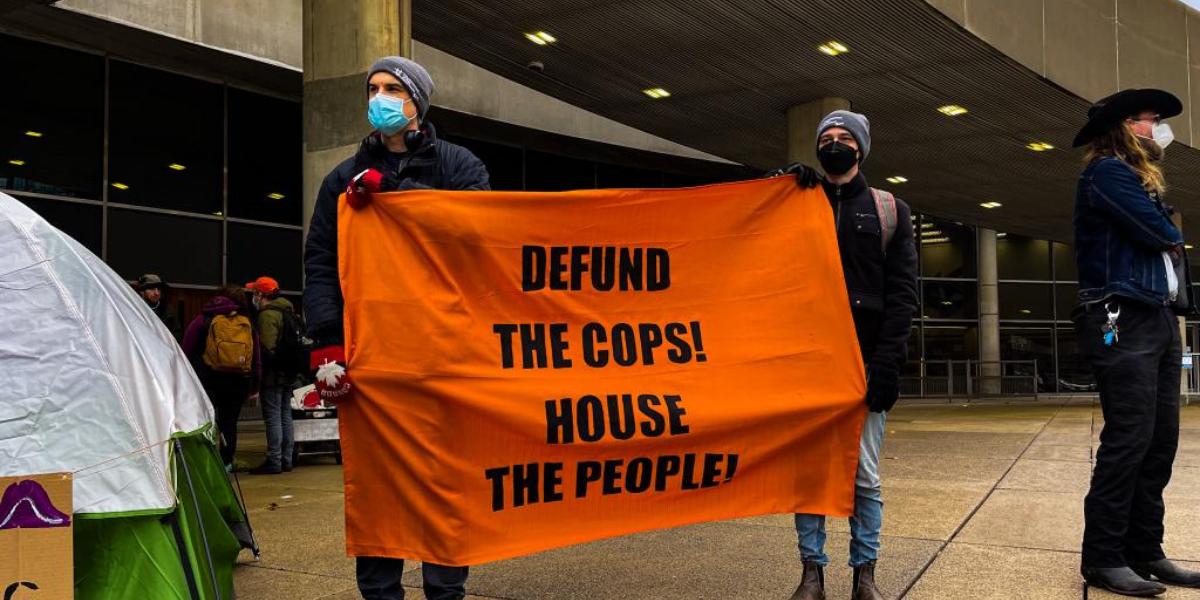 This morning, the Ontario Coalition Against Poverty (OCAP) set up 15 tents in front of Toronto City Hall as Mayor John Tory watched directly above from his office. Community members saw the mayor perched above them and demanded that he meets them downstairs to answer for the unfolding housing crisis.

City councillors were forced to walk past the tents to make their way to the economic and community development committee meeting. The committee was scheduled to meet this morning to discuss ending the leases for hotel shelters over the next two years–including up to five hotel shelters expected to be closed by the middle of 2022.

COVID-19 and the housing crisis

Community activists held signs calling for the city to stop invisibilizing people experiencing homelessness. International law recognizes adequate housing as a fundamental human right, yet over 7,000 individuals endure homelessness each night in Toronto. Throughout the COVID-19 pandemic, park encampments became an essential survival mechanism for Toronto residents who did not have access to living saving spaces amidst an ongoing housing crisis and overcrowded shelters. Gru, an organizer with OCAP, explained that the city has tried to hide the housing crisis for decades, but the COVID-19 pandemic forced the issue into the public eye.

“COVID made it impossible to sweep the issue under the rug because homeless people knew they could not practice social distancing in congregate and overcrowded shelters. We knew before the first outbreak that the shelter spaces would kill us if we stayed in them. Then we saw the issue become visible again as people made the only choice they had: sleep in parks where they could stay safe,” said Gru.

About 2500 people live in hotel shelters. Over the COVID-19 pandemic, encampments grew as people avoided congregate shelter environments. As the city moves to close temporary shelters, unhoused people will need to seek alternative options outside. Gru helped plan the demonstration with tents in front of city hall to force council members to confront the consequences of their decision. He told Spring Magazine:

“When you decommission hotel shelters, you will have more mass camps because people have nowhere to go. There is no housing or shelter space. When we say we’re going to close down these hotels and send people somewhere because that’s effectively the plan, the ‘somewhere’ people will go is back onto the streets and parks.”

The housing crisis is underscored by the lack of funding for social housing, cooperative housing, and the decline of shelter spaces. In 2022, close to 8,000 people will use a shelter system already beyond the point of collapse. But over the summer, the city deployed the police to violently evict encampment residents in parks like Trinity Bellwoods and Lamport Stadium. Communities were destroyed as police demolished the encampment, arresting dozens and leaving behind a trail of people with concussions and broken bones. The city spent $2 million as it viciously evicted encampment residents using riot gear, horses, and overhead surveillance.

OCAP organizer Sam Riot said, “The shelter system is chronically underfunded and overburdened. Meanwhile, Toronto City Council recently voted to increase the police services budget by $25 million for the upcoming fiscal year. There is a shortfall of roughly 1800 shelter beds. People have nowhere to go because of these social failings. The city’s response was vicious and spent almost 2 million dollars on evicting people over three days. They want to criminalize and make invisible homeless people.”

Sam Riot told the crowd that the struggle for housing justice and police abolition is linked. “Encampments are a by-product of a failed system–a place of last resort and one of the most visual representations of a broken system. Instead of working towards meaningful solutions, the city uses its by-laws and criminalizes the same people it forces to sleep in tents.”

The city has policed people experiencing homelessness through municipal codes 6087-13 and 608-14, criminalizing sleeping in parks and setting up tents. Gru explained that whenever homeless people have organized against the crisis, the city mobilizes its police force against them by using its municipal powers as a “weapon against the homeless community.” OCAP demands that the city repeals both by-laws 608-13 and 608-14, an immediate measure to stop the criminalization of people experiencing homelessness.

Sam Riot told Spring Magazine, “OCAP understands that capitalism necessitates an underclass—social assistance like ODSP is severely underfunded, housing is denied, the poor are policed, all as a strategy of exploitation and abandonment. We need quality housing that allows people to live with dignity. That means redirecting the billions we spent on policing and surveillance and putting those funds into life-affirming measures like housing.”