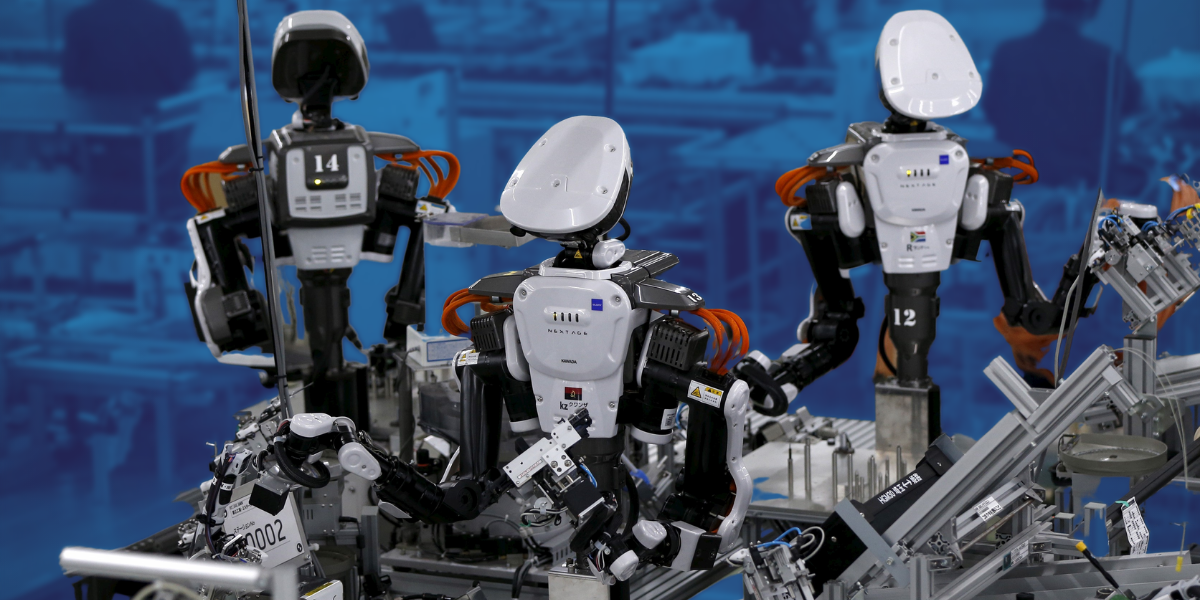 Automation and the Future of Work by Aaron Benanav (Verso, 2020)

Over the last month, service sector employers in the United States have been gripped by a panic over the inability to attract workers into the labour market. With COVID-19 case counts dropping and vaccines being rolled out, employers are looking to get back to business. The only problem is the temporary increase in government income supports and the pervasively low-wages in the service sector means workers are in no rush to go back to work.

One would think that this would be a recipe for automation, where employers could quickly replace recalcitrant workers with robots. But this is not happening. In fact the current panic over workers temporarily sitting out of the labour market shows just how dependent the economy is on labour.

As Aaron Benanav argues in his new book, Automation and the Future of Work, the narratives of massive job displacement due to automation that have become dominant in the media and in some parts of the left are not only overblown, they rest on a fundamental misreading of the evolution of capitalism and the labour market.

Benanav is sympathetic to those who latch onto the mass automation discourse insofar as they are identifying and trying to explain major shifts in the labour market. In advanced economies there has been a significant growth in inequality and an inability of capitalism to create enough jobs for people who need them. Proponents of the automation discourse argue that technological displacement accounts for this, something that is bound to get worse as time goes on.

If advanced technologies and robotics are replacing workers en masse, the argument goes, radical policy solutions will be necessary in order to avoid mass unemployment. It’s no surprise then that many who subscribe to the mass automation thesis advocate for Universal Basic Income (UBI), and likewise many proponents of UBI are willing to stoke fears about impending mass automation.

In great detail Benanav lays out the serious conceptual and analytical flaws of the automation thesis. He argues that global labour deindustrialization has led to systemic underemployment, sluggish growth in labour productivity and lowered manufacturing output.

Over the last fifty years, deindustrialization has occurred in most countries’ manufacturing sectors. Jobs in the sector have significantly decreased, but not due to, as it is commonly assumed, a mass of offshoring, or technological displacement. In spite of job losses, industrial output in terms of volume in countries like the United States, Japan, Germany and Italy has more than doubled since the 1970s. Advanced economies are producing more manufactured goods than ever before.

To answer this Benanav notes that while total output of the manufacturing sector across most countries has increased, the rate of the output growth has sharply declined, even below the already low rates of productivity growth. This makes it appear as if productivity rates are rising in the manufacturing sector due to technological change. But the reality is that the sector is rapidly contracting, as is its share of the total workforce.

The productivity and output growth rates in the global manufacturing sector are decelerating, which is exactly the opposite of what would be happening if there was a massive boon of technological innovation and investment in the sector. In fact, the three countries that have the highest utilization of robotics and technology in manufacturing, Germany, South Korea and Japan, have the lowest deceleration of output and productivity growth rates as well as the lowest rate of job loss in the sector.

So what explains this global deindustrialization if not increased automation? Benanav, like the economist Robert Brenner, argues that a glut of manufacturing capacity is at the core of what is driving down growth rates in output and productivity and leading to job losses.

The massive overcapacity in the global manufacturing sector began in the 1970s, helping to depress prices, demand and profits in the sector. Firms internationalized their supply chains, tried to invest in mechanism and technologies to increase productivity, but ultimately as the sector internationalized, prices remained depressed and the rate of profit remained low. Workers were being displaced not because the sector was dynamic and investing in new labour saving technology, but because the sector was stagnating. Where manufacturing was growing at the firm or at the national level over the last 40 years it was doing so by winning market share from their competitors.

This stagnation in the growth of the manufacturing sector hindered the dynamism in the wider economy. Overcapacity and low growth in the rate of profit meant that business investment slowed. As business demand from goods and services for expansion slowed, it depressed hiring and consumptive demand.

Firms in the wider economy are investing less in expanding business and improving productivity because the rate of return on investment is so low. As Benanav notes, “overcapacity appears as underinvestment.” The low growth in investment in expanding capital stock and investing in new technology has been coupled with a rise of financial capital. Monetary policy and liberal regulation of finance has created the conditions of easy money. Overcapacity and low rate of profit have encouraged firms to chase ownership of existing liquid assets rather than investing in new capital stock. When the rate of return on investment in fixed long-term capital is low, it is no surprise that firms have been choosing to engage in stock buybacks or pay out dividends. The financialization of capital and the astronomical rise in valuation in equity markets finds its roots in industrial overcapacity.

Likewise the economic stagnation in the form of overcapacity explains why productivity growth rates are coupled with stagnating wages and a decline in labour demand. The deceleration of economic growth has been coupled with a full frontal class war on workers’ rights as the bosses aimed to squeeze value from workers in an increasingly competitive market.

As economic growth began to decelerate and unemployment began to rise in the 1970s, the ruling class response was to attack the welfare state in order to push workers back into the labour market. This created the conditions for the growth of low-quality jobs — jobs with lower pay and fewer protections and benefits. This is the context of the rise of precarious work, and it is happening on a global scale. Before the pandemic, only 1 in 5 unemployed workers worldwide received any type of unemployment benefit. This downward pressure on workplace standards is the product of a ruling class response to conditions of relative stagnation and it has been the prime driver of inequality. The growth of workers wages is lower than the already low rates of productivity growth.

The automation theorists thus have it all wrong. Workers are not being displaced by robots en masse. Rather the lack of dynamism and business investment in the manufacturing and service sector has forced a downward pressure on workers’ rights and pay.

Unlike Keynesian theorists who locate the source of economic stagnation on the demand side, Benanav puts forward a compelling argument that the engine of the capitalist economy and the source of stagnation is squarely within the realm of production. Addressing inequality and underemployment has to start with an analysis of that overcapacity.

Over the last 40 years, the vicious assault on workers’ rights and the welfare state has been taking place within a decelerating global economy mired with overcapacity, low rates of profits growth, underinvestment and falling rates of productivity and output growth. Rather than addressing the economic problems and the balance of class forces, silver bullet policy ideas like UBI would be shaped by them. A ruling class and state that has been attacking the welfare state in order to prod workers into the workforce and drive down working conditions to bolster profits is unlikely to provide the means to exist comfortably outside of the labour market. As Benanav notes, UBI aims to empower workers without disempowering capital. In these conditions this will most likely result in a UBI at a low level that will actually create greater inequality in a world of private property.

The hype around impending automation has for years shaped how we talk about the future of work. The fear of automation has been used by bosses and the media as a cudgel to beat back demands for higher wages and improved working conditions. As the pandemic subsides and the economic recovery picks up we will likely encounter a renewed discourse about the future of work and impending automation.

Benanav’s book provides a solid analytical foundation to not only interrogate and debunk much of the automation hype, but more importantly to understand the economic terrain of the post-pandemic world.