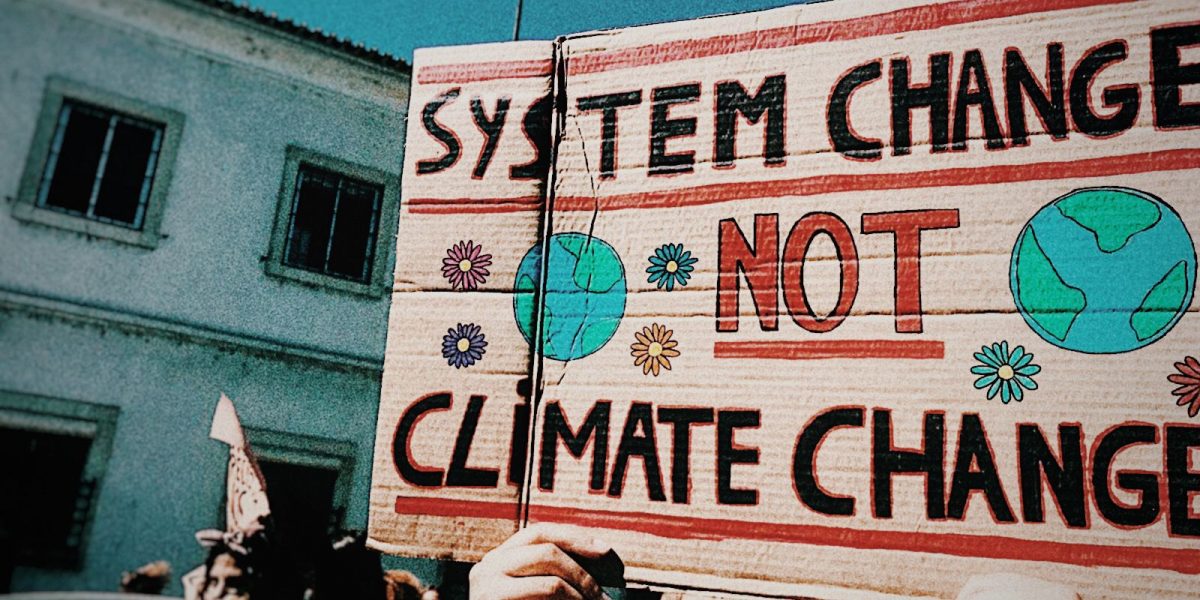 “We cannot simply build isolated utopias while the rest of the world burns, nor can we wait for the slow process of reformist reform to kick in. We cannot simply heal our individual trauma, nor can we consume better to save the environment. We cannot vote harder and place all our hope in a few individuals in Congress. Climate change will kill us before any of these strategies liberate the planet from capitalism.” – The Red Deal: Indigenous Action to Save Our Earth,

The climate crisis is likely the most important struggle we collectively face. It is, in a very real sense, a matter of life or death. A worsening climate crisis means less reliable weather cycles, increased storms and droughts, less crop growth and the risk of famine, and higher than liveable temperatures. This is not a hypothetical future risk: in last June’s heat dome over much of Western Canada, over 800 people died from the lethal combination of climate change, cuts to healthcare, and government inaction–all of which disproportionately impact Black, Indigenous and racialized people at home and abroad.

We are no longer at the ‘convincing’ stage of this crisis. According to The Peoples’ Climate Vote, 64% of 1.2 million respondents from over 50 countries said that the climate crisis was an emergency which requires immediate action. The publishers also note that this survey was completed during 2020-2021, when Covid-19 and the impact of the global health pandemic was also at the front of many agendas. Countries like Canada consistently polled higher numbers for those who felt that climate change is an emergency, that we need to invest more in greener solutions, and that corporations should be the ones to pay.

The climate crisis is like being on a train speeding towards a cliff, and the governments and corporations in charge of the train are unwilling to change direction or even to slow down. The majority of the passengers want to chart a different course, but are not yet organized enough to take over the train. How do the minority of socialists relate to the majority who want climate action but have not yet arrived at revolutionary conclusions?

The rate of pollution from the tar sands is set to increase, and is Canada’s fastest growing source of greenhouse gas (GHG) emissions. Environment Canada states that, “Oil sands-related emissions are predicted to increase by 64 Mt (124%) between 2010 and 2030, to reach about 115 Mt, raising oil sands’ share of national emissions from ~7% in 2010 to ~14% in 2030. This increase in oil sands emissions represents almost 60% of the total projected increase in Canadian emissions over the same period.”

Many are calling on governments and industry to do the right thing, have a change of heart and prevent catastrophic climate change in order to avoid societal collapse. While this makes sense on the surface, the climate crisis won’t lead to the collapse of society but rather the intensification of capitalism. What brought the planet down this road wasn’t the actions of a few greedy individuals, but a global economic system built on profit accumulation. While this is unsustainable from an ecological point of view, this is not new: it has been violent, colonial and destructive from the start and remains brutally unsustainable from a capitalist point of view.

Global emissions need to be reduced by 80-90% in order to reach a sustainable future. While this seems more or less impossible under our current model or an equally problematic deep green degrowth ideologies, it is doable. The answer is not to make liveable conditions worse for the general populace, but to replace capitalism with a system that itself enables and supports sustainable and equitable means of production. This requires remapping and mass use of things like energy grids, public transportation, etc. Yes, some of the needed changes are possible under capitalism, but they will structurally never be enough to end the destruction and oppression baked into the capitalist system.

In BC, the government just recently announced a revamped “CleanBC”, a plan to meet climate targets by 2030 and net-zero by 2050. The plan proposes items like an increased carbon tax and stronger methane regulations, all items that the federal government has already proposed as law. Moreover, the BC NDP continues to support the expansion of the crown TMX pipeline, fracking, logging of old growth forests, and the CGL pipeline on Wet’suwet’en land. And even in the best case scenario for all the points raised in the plan, Seth Klein, Director of Climate Emergency Strategy and Team Lead of the Climate Emergency Unit, points out that “even if this Roadmap were to successfully hit the government’s 2030 target to reduce GHGs 40%, that target is not aligned with what the Intergovernmental Panel on Climate Change (IPCC) now says is necessary. Were we guided by what the world’s leading climate scientists are saying, a wealthy jurisdiction like ours should be reducing emissions by at least 60% in that time.”

While some are looking to the upcoming COP26 conference for this much needed change (fool me 25 times, shame on you…), I think we know that capitalist solutions cannot fix capitalist problems. Capitalism and colonialism are the point of origin for this crisis, and that’s where we need to focus. Solutions to the climate crisis need to be class-based and centre equity and anti-oppression.

The united front for climate justice

As Thomas Hummel from Tempest wrote, “Revolutionaries have a potent weapon in our arsenal for creating this kind of movement: the united front. We need to start to build the broadest coalition possible around a program of fighting for a Green New Deal among workers, students, and activist groups. We do not need to agree upon everything in order to fight together for this goal, but we do need to be having discussions about capitalism and a future society whenever we can.”

The united front is a central strategy for revolutionaries to address a basic question: how do you achieve a revolution when the majority are only currently advocating for reform? The most common strategy is dismissing the revolutionary goal and focusing on reforms, which is the strategy that led to the current climate crisis. Another strategy is dismissing those interested in reform, collapsing the movement down to the revolutionary minority, which is equally ineffective. The united front offers a way out: relate to the majority through the broadest possible movement to give people the experience of struggle in which ideas can change, and intervene in that struggle with socialist politics and organization.

This starts with the premise that to change the world we need to get more people on board. Marxism is about building the “independent movement of the immense majority, in the interest of the immense majority.” Not because we need more people to be sympathetic to climate change under some sense of moralism, but to win political confidence that a better world is possible. If our ideas and arguments don’t resonate with the demands of the working class as a whole, if they don’t actually improve the lived-experience and current conditions of the class, then the arguments will remain unsupported. If we can connect with the majority and build mass movements, this creates the confidence and political experimentation that can change people’s ideas in the course of struggle.

As the revolutionary Leon Trotsky explained, “the greater is the mass drawn into the movement, the higher its self-confidence rises, all the more self-confident will that mass movement be and all the more resolutely will it be capable of marching forward, however modest may be the initial slogans of struggle. And this means that the growth of the mass aspects of the movement tends to radicalize it.”

We can see this from the growing youth and student movement, which have continued to hold strikes for climate, month after month. Climate strikers represent a new and greatly more radicalized generation. Climate change is now a mainstream idea, every major electoral party made climate a large part of their platform. While many of these points in their climate programs are lackluster, they reflect the work done by the climate movements to force the agenda, and can continue to push and raise the floor for change. More and more unions are adopting green job policies with explicit language around the need to reduce emissions while also providing liveable jobs, and serious discussions about bargaining for climate are growing.

But the movement itself is not enough. Every movement is a series of debates over strategy and tactics: some will expand the movement and other will collapse it, some will lead toward revolutionary change and some away from it. For the minority of revolutionaries in the movement, we need to both build the movement as broad as possible–not just with those who already agree with us or are already anti-capitalist, but workers who voted for O’Toole, Trudeau, for Biden, etc. But we also have to intervene in debates within the movement, to raise the level of politics. As Trotsky explained, “We participate in a united front but do not for a single moment become dissolved in it. We function in the united front as an independent detachment.” Socialist media, socialist events and socialist organizations are key to learning and generalizing the best lessons of struggle, and through the process building larger socialist organizations that can help the movement reach new heights.

We organize together because we care about each other. We want a world free from environmental and economic exploitation, where we genuinely are allowed to give consistent input into the day-to-day functioning of our lives and society. Fighting climate change is an important piece of this transformation, and the united front is a strategy for building mass movements that intertwine self-emancipation and socialism. As Indigenous socialists Howard Adams explained,

“One of the greatest tasks is to organize around local grievances in order to improve the people’s circumstances and educate them politically at the same time…The revolution has to be brought about by the masses through the unique struggles that embody their politics and culture. It is from locally based struggles that true revolutionary theory evolves, a revolutionary theory functional for people who must liberate themselves.”