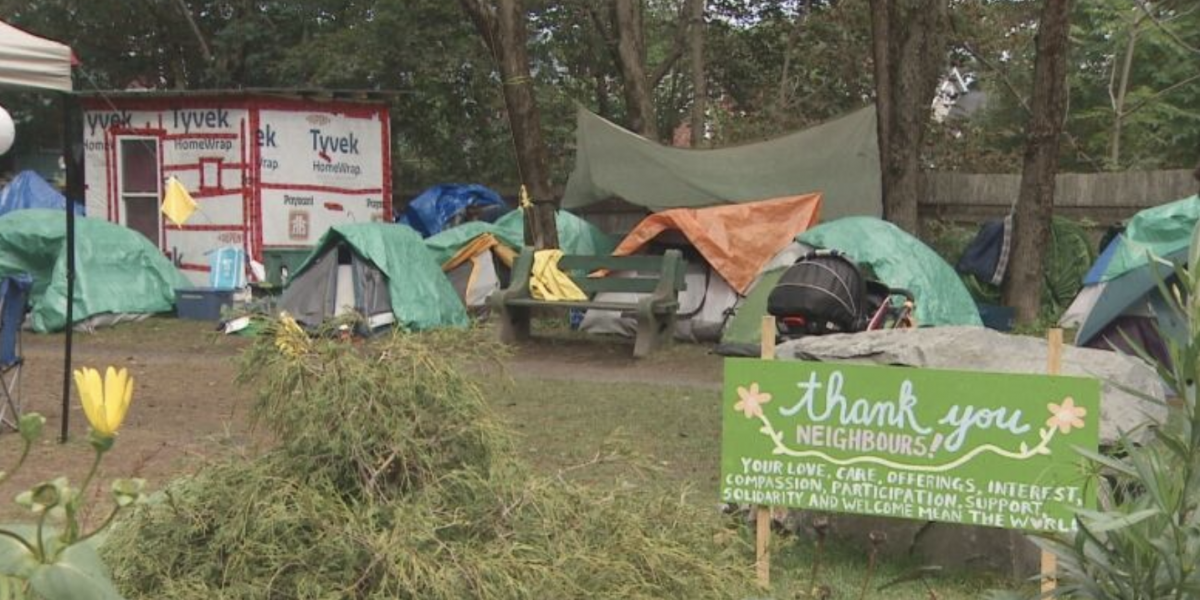 On Friday July 15, the Halifax Regional Municipality (HRM) released a municipal update titled ‘Helping address homelessness in the Halifax region’. The update came ten days after the HRM gave notice to people sheltering at The People’s Park, called Meagher Park by the HRM, to leave the site by July 17. The update includes details about HRM’s plans for The People’s Park, designated outdoor sheltering locations, modular unit sites, and a ‘Lived Experience Committee’. The update does not say anything about the HRM carrying out these decisions on unceded Mi’kmaw Territory.

HRM plans for The People’s Park

The People’s Park formed as a sheltering encampment on the corner of Chebucto Road and Dublin Street in summer 2021. It expanded in August that year when the HRM and Halifax Regional Police (HRP) displaced nearly 50 people by forcefully removing them and their belongings from other municipal greenspaces, arresting and injuring dozens of people in the process.

HRM outside workers, represented by Canadian Union of Public Employees (CUPE) Local 108, released a statement after the events of August 2021 saying that they oppose the removal of people’s shelters and personal belongings from municipal sites. Since then, the local has not released any statements saying what they would do to oppose the removal of shelters from The People’s Park or other locations.

The July 15 Municipal Update stated that “if someone refuses to leave the park, for whatever reason, a negotiated settlement with municipal staff will be attempted. If that is not possible, a response plan will be developed by municipal staff which may include requesting the assistance of Halifax Regional Police, as a last resort.”

This approach violates international human rights law. In A National Protocol for Homeless Encampments in Canada, the United Nations Special Rapporteur on the Right to Housing outlines eight principles, including a prohibition on forced evictions of encampments: “Under international human rights law, forced evictions constitute a gross violation of human rights and are prohibited in all circumstances, including in the context of encampments.” Just like in August 2021, the HRM is avoiding solutions by displacing people from one preferred location to other sites.

The July 15 Municipal Update said the HRM is designating four locations for outdoor sheltering, with plans to service the sites with portable toilets, storage boxes, water delivery, as well as garbage cans and garbage collection. The locations are displayed on a map with a designated number of tents at each site: 20 tents at the Barrington Street Green Space in Halifax; four tents at Lower Flinn Park in Halifax; eight tents at Green Road Park in Dartmouth; and four tents at the Geary Street Green Space in Dartmouth—a total of 36 tents in the entire region.

This plan allocates much less space than what is needed. According to the HRM Point-in-Time (PiT) Count on April 7 2022, there were 91 people unsheltered in tents, encampments on public land, and places unfit for permanent human habitation. The PiT Count also found that 215 people were sheltered in non-profit locations,195 sheltered in hotels through non-profits, and 85 “housed” at Burnside Correctional Facility – a total of 586 people without a permanent address in the region.

On September 29, 2021, in the wake of the shelter siege, the city publicly announced the purchase of 73 modular units. City councilors stated that these units would be available for unhoused residents to move in within a matter of weeks. However, upon arriving in Halifax the units were found to be badly dilapidated and uninhabitable.

With unhoused people and housing activists continuing to apply pressure, the city purchased more modular units in November 2021, announcing that these would be ready for occupancy by the end of that month. It was not until mid-January 2022 that residents of Out of the Cold Community Association (OTC) were able to move into the units, which are located on Alderney Drive in Dartmouth. This site can accommodate 25 residents, including one accessible unit being used for a resident.

Installation of modular units in North End Halifax, in the parking lot of the Centennial Pool in North End Halifax, was supposed to be completed by late January 2022. The units were not ready to begin move-in until early June. These units have capacity for 38 residents, and two of the units are accessible. In total, the modular unit sites have a capacity of 63 occupants. At time of writing, not all units have been able to be filled due to insufficient on-site staff.

Out of the Cold Community Association (OTC), the designated service-provider for the modulars, is a unionised organisation with a city-wide collective bargaining agreement that guarantees fair compensation and democratic processes in the workplace. For the time being, OTC is continuing the work of hiring staff for the Halifax site, and has temporarily paused referrals. They expect to be able to fill the remaining units by the end of August. While the modulars provide a safer and more dignified option for many folks, the now 10-month process of getting the units in place has been unpredictable, fraught with delays (during the winter when shelter was desperately needed), and has not kept pace with need.

The July 15 Municipal Update finishes with a brief description of a proposed ‘Lived Experience Committee’ (LEC). The Update states the intent of the committee is “to ensure the voices and perspectives of persons with lived experience of homelessness are heard in the decision-making process.”

Since the overall approach has been violently exclusionary, the HRM has ensured specific voices shape the decision-making process. The Update says that the LEC facilitators are being selected by United Way Halifax, an organisation whose board of directors is dominated by landlords and business leaders. By having United Way Halifax shape the LEC, the voices of people with experience of homelessness will be managed by representatives of companies like Develop Nova Scotia, Killam Apartment REIT, and Universal Realty Group.

The July 15 Municipal Update shows how the politics of housing is a struggle between the rich and the rest of us, something that housing activists have called “The Housing Question.” While activists in the housing movement have wide-ranging views about possible solutions, the next steps we take are forged through discussion and struggle. For instance, This Should Be Housing is a collaborative public database of property vacancies that helps people imagine how our built environments can be used to serve the needs of people rather than profits.

Through This Should Be Housing, Halifax Mutual Aid (HMA) and the Anti Eviction Mapping Project encourage people to think creatively and get involved in facing the housing crisis. Inspiration for this can come from past victories, like those achieved by the Ontario Coalition Against Poverty (OCAP). As a direct-action based anti-poverty organisation, OCAP is widely known for organising historic marches and squatting actions that led to the creation of more social housing and policies to guarantee shelter space. From a position of Indigenous sovereignty and solidarity, community actions like those of OCAP and HMA can help us move beyond the housing crisis and toward communities based on justice and liberation.