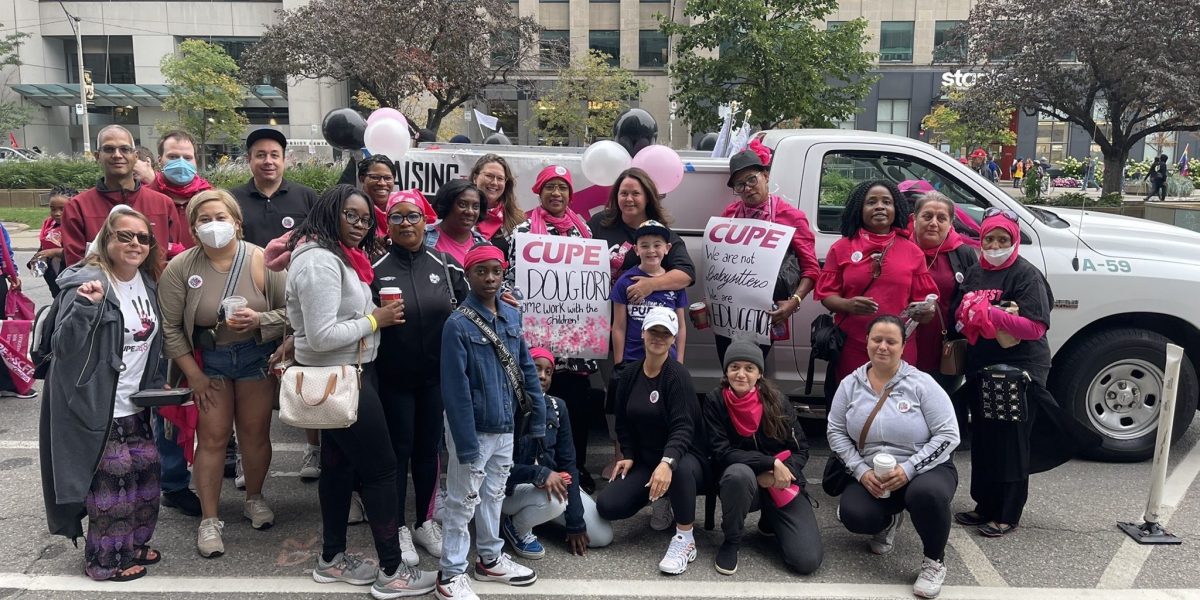 Workers at over twenty childcare centres organized under CUPE 2484 (one of the largest childcare Locals in Ontario representing over 600 childcare workers at twenty-eight centres across the Greater Toronto Area) have entered collective bargaining with their employers. Rather than negotiating as individual workplaces, these early years workers are coordinating their bargaining efforts to build their collective leverage and change the landscape for workers across the sector. CUPE 2484 has launched a campaign, “Raising the Floor,” to support the workers’ push to transform childcare and early childhood education for the benefit of workers, parents, and children across Ontario.

Under Doug Ford, Ontario’s childcare system has taken blow after blow. Bill 124, passed in late 2019, caps public sector wage increases at 1 percent over three years—a disastrous anti-worker policy that looks even more cruel in light of the surge in the cost-of-living over the last year. Public early years workers in Ontario are captured by Bill 124. This legislated wage cap has kept wages below inflation, acting as a wage cut in real terms, has been a backbreaker in a sector where workers are already making barely more than minimum wage. Workers in the sector are also dealing with growing child-to-staff ratios with less and less time to do their necessary professional development and administrative work.

The federal government’s promise of $10-per-day childcare was delayed in Ontario by Ford’s insistence upon protecting private, for-profit childcare operators in any agreement reached with the Canadian government. This demand came in spite of research showing that for-profit childcare centres offer lower-quality care than their public counterparts, and the federal government’s stipulation (based on this information) that for-profit childcare centres be excluded from receiving funding under the deal. A recent investigation revealed that a group of these operators has had a private audience with the Ford government to lobby for fewer oversights and restrictions on how they are allowed to spend public money under the deal, essentially letting childcare operators pad their profits without any guarantee of improving conditions for anyone but bosses.

Across the sector, public and private early years workers are up against a government that cares more about money than the actual care children are receiving. The $10-per-day childcare deal that Ontario and the federal government reached in theory makes childcare more accessible for families. However, the interests of for-profit operators are put ahead of the needs of parents and workers. The low-wages and lack of regulation in the sector means workers are not given what they need to stay in the sector. This creates the conditions for staffing shortages and means parents will have a harder time finding child care spaces.

Though exacerbated in recent years, conditions for early years workers have been declining for much longer. As CUPE 2484’s Vice President Advocacy Jessica Tomas points out, “Early years professionals have been holding together the existing patchwork market system for decades, subsiding care with low wages and precarious employment.”

The Raising the Floor campaign is a battle against these conditions. “The disparity of decent work within the sector is incredibly frustrating and our local members decided to do something about it,” says Tomas. “We have organized around long-standing decent work issues and are using our collective strength to fight for better conditions for all of our members.”

The fight for decent work has defined the campaign’s goals. Through Raising the Floor, CUPE 2484 is making five key demands to improve workplaces for early years workers:

Over 86 percent of bargaining workers with CUPE 2484 have signed a Unity Letter declaring their support for these demands. Through this letter and this campaign, workers are showing their shared commitment to decent work in childcare—a key part of the fight for universal, publicly-funded, universal, accessible childcare, and the fight for decent work for all.

For both parents and workers, the heart of the issues facing childcare in Ontario is workforce turnover, which is created by the terrible working conditions for early years workers. Overworked and underpaid early years staff are leaving the sector in droves. When childcare centre operators pinch every penny by having workers doing more work for less pay, workers begin leaving the sector. The more staff leave, the more that the other staff are expected to pick up the slack, thus encouraging more staff to leave.

By advancing these five key demands through collective worker power, Raising the Floor is a campaign aimed at ending this cycle by creating a sector where workers have what they need to stick around. CUPE 2484 President Erin Williams explains:

“Our Raising the Floor campaign outlines solid workforce strategies that will actually allow for parents and families to enroll in $10-a-day early years education and care. With reference to the Association of Early Childhood Educators of Ontario and the Ontario Coalition for Better Child Care, ‘Roadmap to Recovery’ document, we developed the five coordinated bargaining proposals that directly address the workforce recruitment and retention crisis that is preventing the expansion of a national early years plan.”

A new future for parents and workers

Through the Raising the Floor campaign, workers in CUPE 2484 are fighting for a future where childcare is both accessible and treated with the importance it requires. Children, parents, and workers deserve better than their bosses and the government have given them. The only way to create strong, effective childcare is to stop letting capitalism prioritize profit over the well-being of children. The only way to do that is to use our collective power as workers to fight against the mass exploitation of those in the early years sector, just as workers with CUPE 2484 are doing.

The fight for decent work is the fight for better childcare. CUPE 2484 is raising the floor—not just for early years workers, but for the entire working class.

To add your name to CUPE 2484’s Unity Letter in support of Raising the Floor, click here.