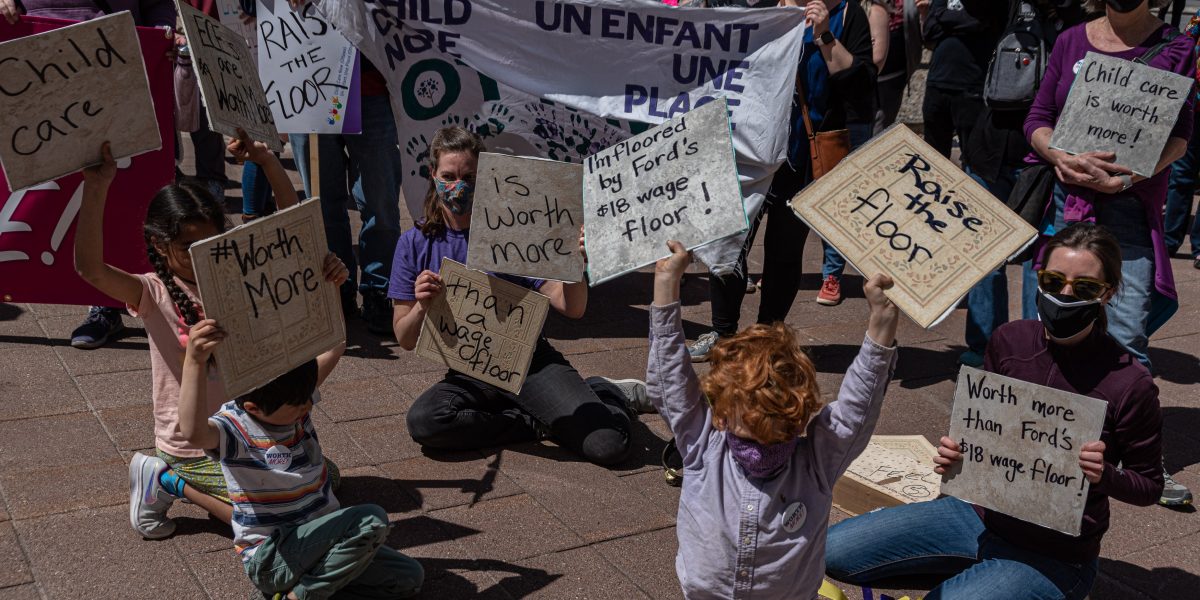 Ontarians have been waiting with baited breath for more than a year for Ford to finally sign off on a deal with the federal government to establish $10/day childcare. Having finalized the deal in late March, after most provinces signed during the summer of 2021, the Ford government’s foot-dragging was done under the onus of avoiding “making a bad deal just for the sake of making a deal”.

It’s obvious though that this delay was mere chicanery to better allow Ford to use this agreement as campaign material before the June provincial election. A tongue-in-cheek interpretation of Ford’s delay was that he was worried that if he had signed the deal any sooner, voters might forget that his was the government that signed a subpar agreement that kept childcare workers’ wages in the basement while ensuring low-quality for-profit operators would remain a growing player in the childcare sector.

Let’s take a closer look at some of the deal’s deficits that appear to come straight out of a Conservative policy playbook.

The deal is bad for children

When the federal government first announced its plan of establishing bilateral agreements with each of the provinces and territories to create a national childcare system, the intention was to exclusively fund public and non-profit centres.

This decision was based on research that has affirmed that for-profit care is worse for children because less money goes towards improving the conditions of care so that it may be claimed as profit for operators. Updating outdated or unsafe infrastructure or hiring more childcare workers to lower child to worker ratios are all seen as bad for business even though it’s better for children.

Seemingly blind to this, Ford’s government drove a hard bargain with the federal Liberals, successfully negotiating the use of federal dollars for for-profit centres. This was done under the guise of supporting ‘female entrepreneurs’ and expediting the creation of new childcare spots in the province, obscuring the fact that the growth of ‘big box’ corporate childcare centres would be bad for children and workers. While 75% of Ontario childcare centres were non-profit in 2020, for-profit centres are responsible for 66% of all growth in the childcare sector in Canada. By allowing new federal dollars to fund for-profit expansion, Ford will increase the presence of lower-quality for-profit actors in the sector.

Funding lower quality for-profit care is not the answer to the problem of a childcare shortage. What Ford should do is allocate additional funding to support the transition of for-profit centres to non-profit status. Instead, all he’s done is subsidize the operations of for-profit companies who hawk childcare as a commodity, rather than provide it as a public good.

The deal is bad for workers

The deal also hasn’t changed anything for workers. The Early Childhood Educators I’ve spoken to say that while they support the deal because it will make childcare more accessible to families, it won’t do anything to change their poor working conditions and low wages.

Many ECEs are making close to minimum wage while labouring under gruelling conditions that require them to work with multiple children, some of whom have special needs and would benefit from individualized care. Many childcare workers say that they rarely have time to do necessary preparation and documentation work, forcing them to work on their breaks or outside of paid time. The pandemic has only made this situation worse as constant sanitation is added to the already long list of tasks they need to do.

While Ford has said he respects ECEs for the work that they do, you would be hard-pressed to find evidence of this appreciation in Ontario’s childcare deal. Ford’s deal does nothing to lower children to staff ratios to reduce high workloads, and Ford’s promise to slowly raise ECE wages to $25/hour using yearly $1 increments remains completely out of touch with the current cost of living.

What workers need is a wage grid that would guarantee a decent wage for all childcare staff right now. A wage grid is being called for by the Association of Early Childhood Educators of Ontario and the Ontario Coalition for Better Childcare. With a wage grid, ECEs would immediately benefit from a starting wage of $30, while other childcare staff would start at $25 per hour.

Guaranteeing childcare workers a decent wage will become essential if Ford hopes to retain and attract the workers needed to serve the increasing number of families who will now be able to afford childcare. Without a wage grid, childcare workers will continue to leave the profession en masse to find higher-paying work since “most ECEs make close to minimum wage, about $18 an hour”, according to ECE, Alicia Winegarden.

It should come as no surprise that the work of childcare workers continues to be cheapened under capitalism. Under this economic system, childcare is portrayed as a low-value activity that is within the ‘natural’ domain of women who may be doing this as unwaged work in the home or for low wages within a childcare centre.

Social reproduction feminists, including Sylvia Federici and Mariarosa Dalla Costa, originally theorized in the 1970’s that housework, including childcare, is devalued under capitalism because it allows employers to lower the total costs of reproducing the waged worker. More specifically, by forcing housewives to live off of their husband’s wage or for waged female care workers to live in poverty on a pitifully low wage, capitalists can ensure that the workforce is continually regenerated while pocketing a larger profit.

Ford’s deal is an exemplification of this pro-capital logic that devalues the work of childcare workers while also ensuring childcare remains a commodity in the province. Knowing that capitalism depends on cheapening women’s care work, the left must oust Ford’s Conservative government in the short-term while working in the longer-term towards socializing childcare so that it is transformed into a public good for all.