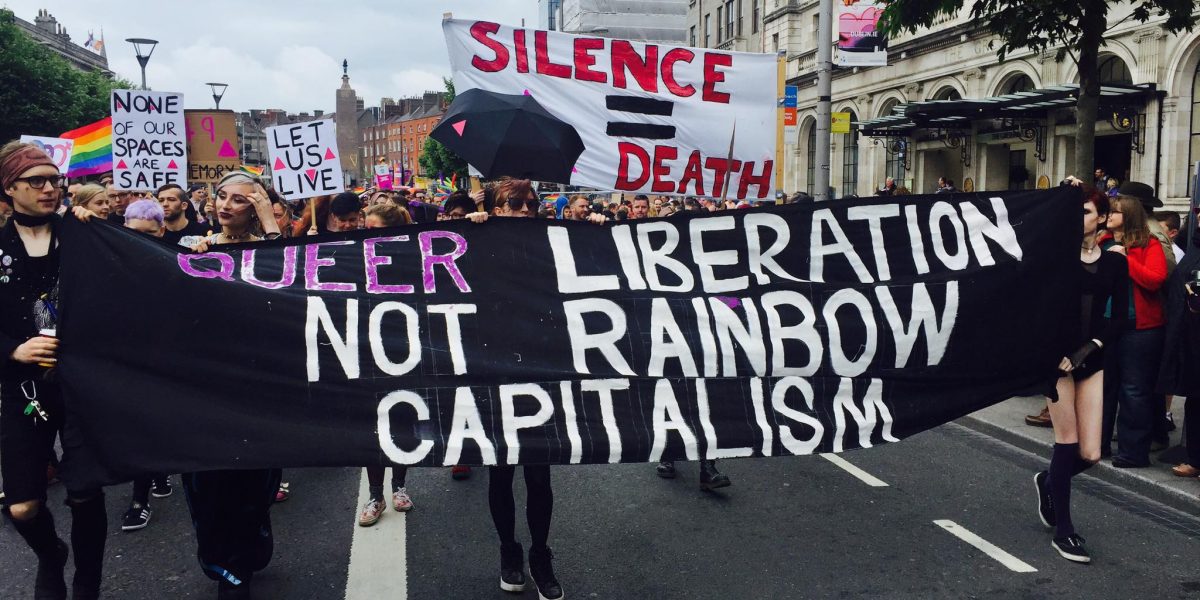 There can be no true liberation from cishetero-patriarchal oppression, or other forms of oppression, without the elimination of capitalism. Queer folx labour for the ruling class, just like our cisgender kin, yet; our exploitation is particularly traumatizing given that we are almost always labouring to line the pockets of cisgender straight men. Fifty years ago, these men would have supported the criminalization of our sex lives and gender presentation. Let it not be forgotten that Stonewall was owned and operated by cishetero-patriarchal crime elements that directly profited off queer oppression. When considering queer history, we should look to and learn from radical/Marxist feminism to understand and articulate our existence as queers under capitalism.

Capitalism exploits all workers for profit, and it uses oppression to increase the rate of exploitation of certain workers—paying racialized people, women, and especially racialized women less—and divide the working class. Under capitalism, binary conceptions of gender roles was solidified, mechanized and industrialized, to maintain the nuclear family. A woman’s place was to labour, unpaid and unappreciated, in the home. A man’s place was to labour, underpaid and overworked for the ruling class. Upholding the nuclear family to maintain capital accumulation leads to pathologizing, criminalizing and repressing those who didn’t conform to the artificial gender binary, so homophobia and transphobia are intertwined with sexism.

The cishetero-patriarchal oppression of industrial capitalism is also part of a system of racial capitalism which is built on colonialism and slavery and which expands through imperialism. The ruling class will happily diversify and expand their definition of who is eligible to engage in wage-labour—if and when it suits them. As Angela Davis explained, “more Black women have always worked outside of their homes than have their white sisters. The enormous space that work occupies in Black women’s lives today follows a pattern established during the very earliest days of slavery. As slaves, compulsory labor overshadowed every other aspect of women’s existence…when it was profitable to exploit them as if they were men, they were regarded, in effect, as genderless, but when they could exploited, punished and repressed in ways suited only for women, they were locked into their exclusively female roles.” When the great imperialist powers went to war and mainly men were sent to the trenches, women were temporarily encouraged to replace their jobs—only to be driven out when the war ended.

Feminists who truly understand the nature of the patriarchy know that it is entrenched and enabled by the capitalist class. They look to the historical examples of the gendered divide of labour, and they connect it to the current feminized marketing gimmicks and products designed explicitly to appeal to “feminine sensibilities.” Radical feminism that is not also anti-capitalism neglects to understand what must be done to truly liberate women, and queer liberation must also pursue anti-capitalism.

While it is perhaps an overused example, we need only to look to Stonewall as an instructive and illustrative event. It is well known that the bar was not queer owned. It was carved out as a “safe space” by organized (corporate) criminal elements in New York City. Police raids were often known about in advance, including on the night of the infamous Uprising in June of 1969. This means that “corporate” ownership of a queer “safe space” directly and maliciously allowed for the police harassment of queers. The bar was not the target of the raid, it was the patrons that the cops came to harass and criminalize.

From anti-capitalist riot to pink-washing police

The queer liberation movement emerged as a challenge to cops and corporations, in the context of the civil rights and anti-war movements, and was led by BIPOC queer anti-capitalists like Marsha P. Johnson and Sylvia Rivers. As Rivera explained, “before gay rights, before the Stonewall, I was involved in the Black liberation movement, the peace movement…I said, ‘well, now it’s my time.’ Here, I’m out here being a revolutionist for everybody else. I saw now it’s time to do my thing for my own people.” Similarly, the queer liberation movement in Toronto started as a protest against police raids on bathhouses in 1981, with the slogan “enough is enough: stop police violence”.

So, when we fast forward to now, it leaves a particularly bad taste in ones mouth to see that corporations and cops have been able to obscure their historical relation to queer folks. All queers are familiar with the growing corporatisation of Pride. Every year, we line the streets of major cities and watch as half naked queer bodies ride the floats adorned in rainbows and Fortune-500 brand logos. This sleight of hand has been driven by a shift in public opinion. The trend towards inclusion, equality, and diversity in the public sphere—a product of decades of struggle—has been hijacked corporate interests and is now used as a branding tool, a selling feature, meant to appeal to “queer sensibilities.” You can find rainbow coloured iterations of almost every consumer product imaginable. Every big corporation loves to play ally, so long as it means they are getting paid. Much like the example of women outlined above, it becomes clear that our acceptance and “inclusion” in the corporate world is only because it suits the ruling class.

Alongside the pink-washed corporate entities, we often see police vehicles emblazoned with friendly looking colours. Walking alongside, wearing bulletproof vests that say “police’ in a rainbow font, officers shoot at the crowd with water guns. They smile and dance and engage in other falsehoods that belie the true nature of the relationship between cops and queers. The friendly faces you see masquerading as allies at Pride seem innocent, but cops are historically and still oppressors of queer identities—especially BIPOC queer folx—and Pride emerged to challenge this reality. Now cops engage in the public relations exercise of Pride to distract from and minimize the brutalization and ostracization of queer bodies that they have engaged in for decades, and continue to do so when and where they find their tolerance of queer folks waning.

But queer anti-capitalism is reclaiming Pride. Five years ago Black Lives Matter-Toronto stopped the Toronto Pride parade to call for a ban on police, greater representation for BIPOC queer folx, and self-determination for community spaces. Today the abolition movement is even bigger, calling to defund and dismantle the institution that represses BIPOC and queer folx.

Similarly, the Queer Liberation March in New York City is organizing to reclaim the spirit of Stonewall 50 years later. It is the ideal form of queer protest expression: they refuse to allow cops and corporations in their demonstration, and organize marches that draw thousands of supporters. It should come as no surprise that police have often responded to the March with brutality towards queers. Just like the “good old days,” the cops that showed up to beat up queers who excluded them from their celebration demonstrate a reversion to their default. Queer Liberation March exposes the true relationship that queer folx have with cops and the corporations they serve: play nicely with cops and corporations, or exclude them at your own peril.

In response to the corporatization of pride and pink-washing of police, we should learn from Marxist feminism and adopt Marxist principles into queer theory. We should reject corporations and cops, support anti-capitalism and abolition, and build movements that combine Black liberation, women’s liberation and queer liberation. And like Marsha P. Johnson, be prepared to throw bricks when the time comes.