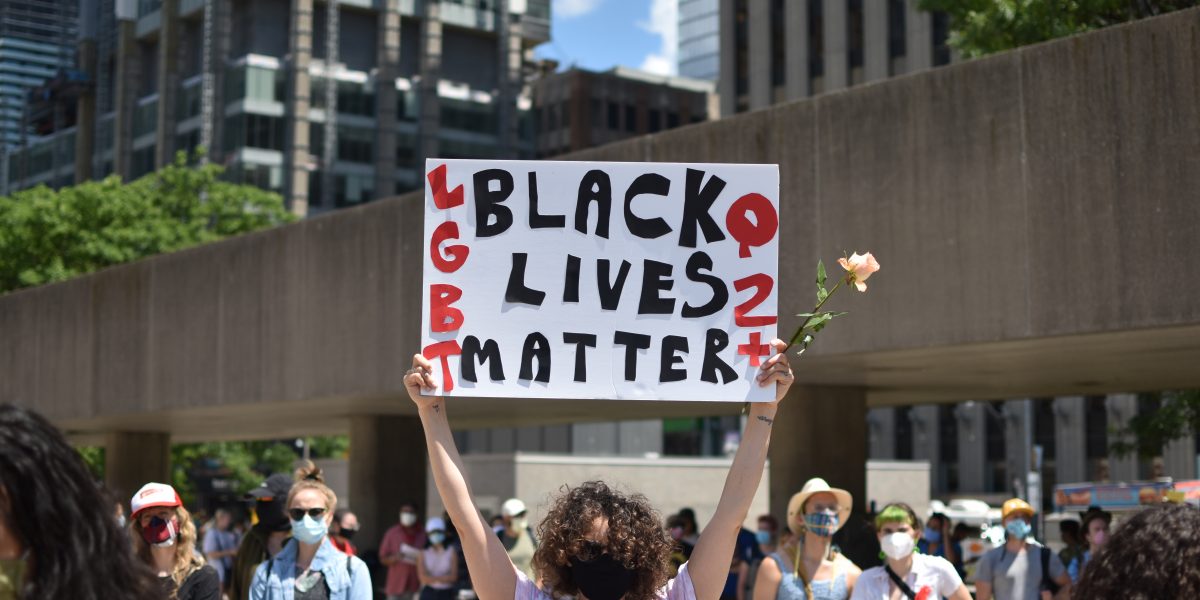 On Sunday, June 28, thousands of people came together to attend Abolish Police in Canada, a rally demanding the abolition of the police, starting with a 50% cut to the Toronto Police Service’s budget. Organizers stressed the importance of reinvesting those funds into support for marginalized communities. The rally shared space with the Afro-Indigenous Rising encampment currently occupying city hall.

‘The police are inherently and systemically racist‘

Against the backdrop of worldwide protests against racism and police brutality, the No Pride In Policing Coalition organized to support Black Lives Matter Toronto by hosting a rally and teach-in.

The event addressed  the racist history and origins of the police, police presence in schools, the disproportionately adverse effects policing has on indigenous, Black, queer, and trans communities, the multiple instances of police brutality and killings of Black community members, the dismantlement of the prison industrial complex, and of course, the abolition of the police.

Speakers argued that the over one billion dollars Toronto spends on its police budget could be much better spent on libraries, reinvestment in Black and indigenous communities, mental health services, housing, and shelters.

‘We are paying for our own oppression‘

One speaker railed against the typical calls for justice. They noted that calls  for more cultural awareness training are misguided. The problem, they argued, has nothing to do with Black and Indigenous cultures, instead the problem is the racist, violent, and corrupt police culture.

While addressing calls for more Black and Indigenous police, it was argued that this doesn’t work either because these communities are a statistical minority and will never make up the majority of the police, or the institutions that control them. Those that do enter the police force are routinely harassed and bullied by their co-workers. Lastly, the claim that oversight committees will bring justice. In practice, they don’t work because the majority of people who sit on these oversight committees are white men who are former police officers.

The rally itself had a great energy, and its composition was very diverse. It seemed that many people felt that since this year’s Pride parade was cancelled, this was their opportunity to celebrate, and the crowd was very receptive even hours into the event. This is quite a contrast to some of the responses to the BLM action at Pride 2016, and it is heartening to see the political growth that has forged a bond between these two communities.

It is important for marginalized communities to support one another and to amplify the voices of other communities, because we are more likely to win concessions from the state, and our support has more strength when we stand in unity. The classic example of this is the case of Gays and Lesbians Support the Miners, which was partially depicted in the film ‘Pride’. The ability of these two groups to come together resulted in the LGBTQ community’s raising of tens of thousands of dollars for striking labourers, and the Labour Party’s adoption of a resolution committing to LGBTQ rights.

When we see that the state and the police are abusing a community the way we’ve seen our own community being abused, our job can’t be to passively stay in our own lane. We need to actively show up and stand in solidarity. This is how you turn intersectional theory into intersectional practice. Marginalized communities consist of individuals occupying a multitude of identities, and our job is not to simply recognize this, but to use this knowledge to materially connect seemingly disparate communities together.

It’s beautiful to see this solidarity between LGBTQ and Black communities, as both face disproportionate violence at the hands of the state in the form of police brutality and killings. Liberation can only come when oppressed peoples fight together in unity, and this event stands as a shining example of what that fight can look like.