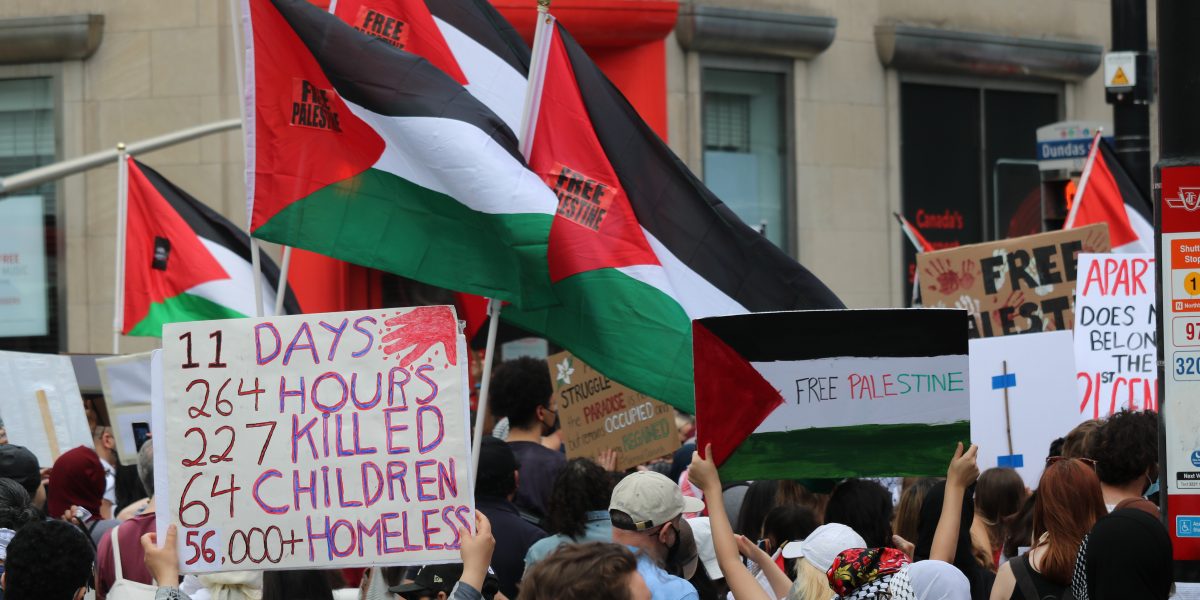 On Saturday, thousands took to the streets of Toronto in support of Palestine and the ongoing resistance against Zionist violence. Marching from Yonge-Dundas Square to the Israeli consulate at Yonge and Bloor, demonstrators expressed outrage over the last week of Israeli airstrikes and the evictions in East Jerusalem, as well as the ongoing, 73-year long Nakba, (the forced displacement of the Palestinian community).

Recent demonstrations have also actively celebrated acts of intifada (resistance), including the incredible May 18 general strike which saw hundreds of thousands of Palestinian workers grind the Israeli economy to a halt.

Ceasefire is not enough

Following a global outcry and Palestinian resistance, Israel was forced into declaring a ceasefire on Friday. 248 Palestinians were killed during the 11-day siege, including 64 children — almost 1 person every hour. While a ceasefire is good, it is far from good enough. “It is a ceasefire,” one sign at the march read, “not a cease apartheid.” Indeed, the broad struggle for freedom against Israeli colonialism continues, and no real peace can be achieved when one state actively colonizes and abuses another.

Soon after the ceasefire, moreover, the Israeli government quickly announced plans to arrest hundreds of Palestinians over participation in sit-ins and other resistance to Israeli violence. Under “Operation Law and Order,” the government will continue crackdowns on Palestinians living in the Israeli-occupied territories. The program is nothing new: Palestinians living in these territories are routinely and systemically denied basic political and civil rights.

Shutting down two kilometres of one of Toronto’s busiest streets, the march was a huge show of support and further demonstrated how attitudes on Israeli apartheid are changing. Over the last two weeks, protests worldwide saw record numbers of people come out. Despite the ceasefire — something that might have temporarily deflated enthusiasm to be in the streets — thousands sung, chanted, waved flags, waved signs. Toronto was no different, and by the time the march began the streets overflowed with people.

It is hard to see the recent outpouring of righteous anger in support of Palestine as separate from last summer’s protests for racial justice. The upsurge in Palestinian solidarity is building upon the struggle against anti-Black racism and drawing links between settler-colonialism, racism at home and abroad. As Krisna Saravanamuttu notes, “the murder of Floyd sparked a national uprising that centred on white supremacy and the legacy of colonialism, directly laying the groundwork for the mainstream conversation about Palestine today.”

The web of struggles embodied in the Palestinian fight for freedom takes on particular significance in Canada — a settler state not only complicit in colonial oppression against Palestine, but actively participating in it at home. The country’s unyielding support for Israel is not simply a reflection of its imperial aims in the Mideast, denouncing Israel would force Canada to look at its own abuses. “From Turtle Island to Palestine,” the chant goes, “occupation is a crime.”

In light of the rising resistance seen over the last year, the state is no doubt sensitive to, and concerned about these movements. Saturday’s protest — which was, and always intended to be, peaceful — was met with an unnervingly large police presence. Horses, motorcycles, bikes, and cars all roamed the perimeter of the demonstration. This same heavy handed police presence was also present  at the march in memory of Regis Korchinski-Paquet organized by Not Another Black Life on Monday. At that rally they antagonized attendees, and even arrested three people — though they were soon released after protestors blocked the exits for the transport vehicles.

On Saturday, police cordoned off space for the counterprotesting Jewish Defense League (JDL), a violent right-wing group, who awaited the march at the Israeli consulate. Police stopped the march south of Bloor due to JDL presence, but demonstrators nevertheless patiently waited it out, eager to show the consulate, and the world, that enough was enough.

“Look where we are,” said one organizer. “We are at the intersection of one of the busiest streets in Tkaronto, and we’re gonna block it.” They then guided everyone to sit down, and thousands congested the streets to sit, listen to speeches and songs, and wait to push on. “We’re celebrating resistance here today,” they continued. “We’re celebrating intifada.”

A Palestinian singer by the name of Natalie soon stepped up to sing to the sitting crowd. Before she began, Natalie observed something profound and prophetic: “Music is the last thing to be forgotten.”

The tide is beginning to turn on Israeli apartheid. Many of the long-dominant rhetorical and political arguments justifying Israel’s aggression are losing their popular cache. Arguments that “two sides” are responsible for the conflict or that anti-apartheid politics are anti-semitism have almost no popular appeal outside of the bubble our politicians and mainstream media occupy.

It bears reminding that global outcry and Palestinian resistance in the region, combined with effectively fighting Israel’s public relations machine, forced the country to back off its flagrant campaign of violence. It did not do so out of its own benevolence. This was won, and this win reflects a growing appetite for justice worldwide.

The ways in which the Palestinian struggle connects so many different struggles makes it a key component in the global fight against oppression. As Nelson Mandela famously observed, “We know too well that our freedom is incomplete without the freedom of the Palestinians.”

With each passing day, this is becoming more clear. As demonstrations swell in size and the global conversation turns a corner, it is undeniable now that the question of freedom is not if, but when. Until then, it is worthwhile to return to a common chant that rang through the air on Saturday: “Viva viva intifada.”