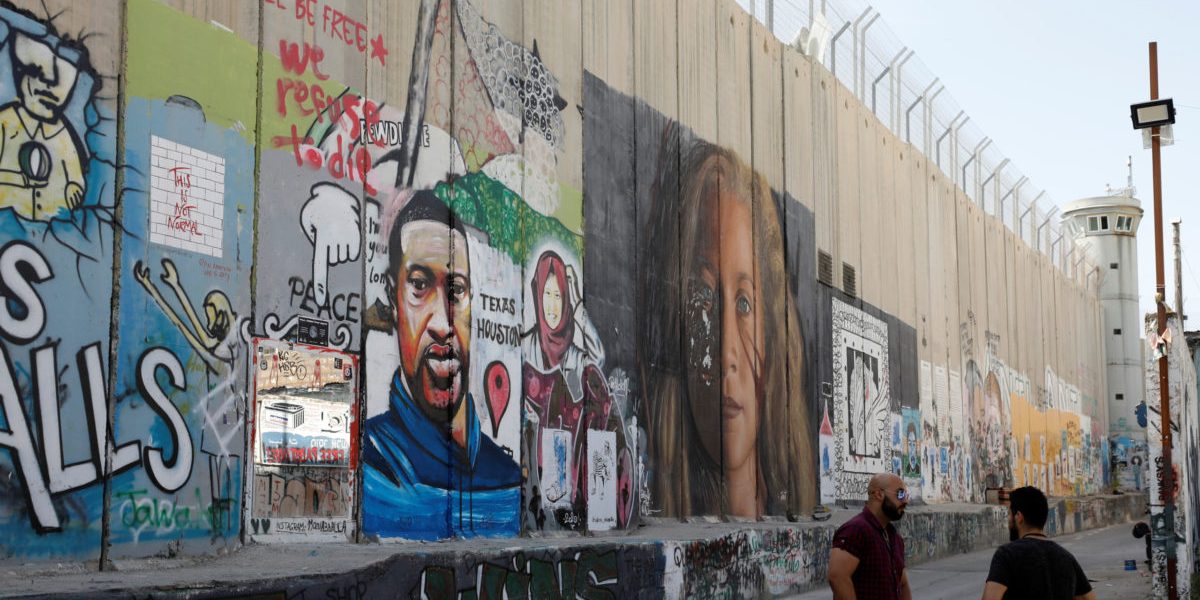 One year after the murder of George Floyd in Minneapolis, we find ourselves mourning the systematic killings of Palestinian people in Gaza. George Floyd’s public lynching unleashed uprisings across the United States with an unceasing wave of protests across the world. Almost a year later, millions marched across the globe and forced Israel and its closest ally, the United States, to finally agree to a cease-fire. We witnessed a significant shift in the public debate about Palestinian freedom that targets Israeli apartheid as the primary obstacle to peace.

The murder of Floyd sparked a national uprising that centred on white supremacy and the legacy of colonialism, directly laying the groundwork for the mainstream conversation about Palestine today.

The violence enacted on Black and brown peoples by the police is mirrored globally. The prison industrial complex cannot be disassociated from the military-industrial complex. American and Canadian militarized policing is reenacted globally through direct invasions and the sponsoring of arms sales to their regional allies.

Police forces in North America are equipped with full-body armour, shields, and face coverings. They are armed with military weaponry like the armoured vehicles used in Iraq and Afghanistan. The military model of policing – developed in the US and Canada through patrols that enforced slavery and the displacement of Indigenous peoples–is globally exported. As Robyn Maynard, the author of Policing Black Lives, notes “the endemic anti-Blackness found within state agencies has global and historical roots and can be traced back to the transatlantic slave trade.”

US weapons are used to routinely bombard Gaza, a small strip of land where nearly 2,000,000 Palestinians are crammed into an open-air prison. According to the Stockholm International Peace Research Institute (SIPRI), the US provided more than 70 percent of Israel’s arms from 2009-2020.

In that time frame alone, Israel’s Operation Cast Lead in 2008-2009 killed at least 1,400 Palestinians. Israel’s 2014 assault, Operation Protective Edge, left at least 2,104 Palestinians dead, including 495 children and 253 women. In the last round of violence, nothing was spared as homes were razed to the ground, roads leading to hospitals were obliterated, and even Gaza’s only COVID-19 testing lab was wiped off the map. As more bodies were pulled out of the rubble after the cease-fire, the death count became clear: Israel had killed 248 Palestinians, including 66 children. In the 11 day bombardment more than 58,000 Palestinians were made homeless.

Israel routinely commits grave violations of the Geneva Conventions by targeting sites of worship like the Al-Aqsa mosque in occupied Jerusalem and residential homes. Washington, London, and Ottawa provide billions in arms for Israel. Even while world leaders called for restraint from ‘both sides,’ Joe Biden’s administration recently approved $735 million in arms sales to Israel. Justin Trudeau’s government supplied $13.7 million in military hardware and technology to the Israeli war machine.

Maynard writes that state violence is “often legally and culturally sanctioned as legitimate, the harms inflicted by state actors are rarely prosecuted as criminal, even when the actions involve extreme violence, theft and loss of life.” Anti-Black racism reconsolidates Black people into dangerous criminals while Palestinians are turned into the terrorist other. Black people and Palestinians become disposable in an interlocking system of violence driven by slavery, imperialism, and genocide (a system defined by Cedric Robinson).

The structural violence that kills Black and brown people here is launched against our Palestinian relatives, too.

Activists in Palestine connected with Black freedom fighters during the Ferguson uprising in August 2014. Through social media, they shared strategies for dealing with technologies of state violence like tear gas, breathing life into a fierce alliance of struggle that goes back decades.

The Black Panther Party (BPP) conceptualized Black Americans as a ‘colonized people within a colony’ and saw natural links to the occupied people in Palestine. Huey P. Newton, a key leader of the Panthers, connected the Black struggle to anti-colonial movements in Algeria and Vietnam. Newton wrote that the Panthers “support the Palestinians just struggle for liberation one hundred percent.”

In a Vision for Black Lives, a political platform drafted by the Movement for Black Lives, Black activists declared their solidarity with Palestine. They called Israel an “apartheid state,” perpetuating genocide on the Palestinian people with unconditional economic support from the United States.

Black uprisings from Ferguson to Minneapolis laid the groundwork for seismic shifts in political consciousness. They paved the way for a change in the realm of possibilities about abolition for the political mainstream. The demand to defund, demilitarize, and dismantle carceral institutions like the police was an organized intervention by Black activists and their collaborators against structures of racism. This decades-long demand was reestablished through a renewal of Black activism after the killing of Treyvon Martin.

“To our Black brothers and sisters, your resilience in the face of brutal dehumanization is a source of inspiration to our own struggle against Israel’s regime of occupation, settler-colonialism and apartheid.”

The BNC called on the Palestinian solidarity movement to stand with the Movement for Black Lives. The BNC, a broad Palestinian civil society coalition representing over 170 Palestinian organizations, supported the calls for defunding and demilitarizing the police and putting resources back into community-led health and safety. The BNC statement exposed interlocking systems of state violence: “The US justifies and advances the global war on terror via its alliance with Israel and is complicit in the genocide taking place against the Palestinian people.”

Abolitionists like Rajean Hoilett, a leading organizer of the Toronto Prisoners Rights Project (TPRP), sheds light on the connections between the murder of Black peoples by US and Canadian police forces and the training they receive from Israel. He writes:

“Prisons and jails are a by-product of white supremacy, colonialism and imperialism. These same oppressive forces underpin the Israeli settler-colonial project, and long as Palestinians live under apartheid, our demands for abolition will remain unrealized.”

The uprising against the police execution of George Floyd radicalized a new generation of people that see the link between systems of settler-colonial violence across borders.

We are in a moment where there is a renewed relationship between oppressed peoples worldwide. A reckoning of abolition and apartheid is a prerequisite for any serious conversation about Black freedom, just as it is for Palestinian liberation from the Jordan river to the Mediterranean Sea. Now, there is no turning back.