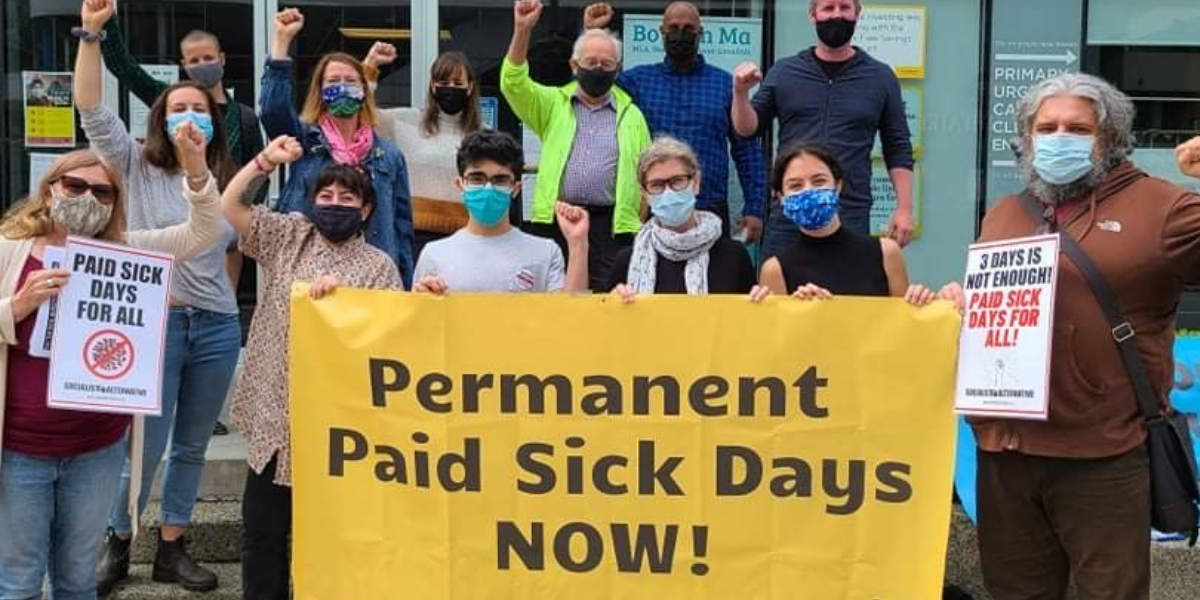 The federal Liberals were re-elected on a platform promise to introduce legislation providing 10 paid sick days for federally regulated workers within a 100 days and convene provinces and territories to develop a national action plan to legislate paid sick days across the country.

But in the middle of the fourth wave of COVID-19, and the start of influenza season, we can’t afford to wait 100 days. Paid sick days save lives and are good for the economy, there is overwhelming support across the country, and both federal and provincial governments need to mandate them now.

It’s been more than a year since Prime Minister Trudeau said, on May 25, 2020: “the government will continue discussions with the provinces, without delay, on ensuring that as we enter the recovery phase of the pandemic, every worker in Canada who needs it has access to ten days of paid sick leave a year.” In the 16 months since that promise there have been another three waves that have infected 1.5 million people and left 21,000 dead.

We are now in a fourth wave, and these promises can’t wait any longer. There have been 200,000 infections and 1,500 deaths in the past 100 days, and waiting another 100 days will add more unnecessary suffering and death. All workers need paid sick days, and they need them now.

So to be effective, paid sick days need to be 1) universally available to all workers without exception, 2) fully paid, 3) adequate in number, 4) permanent; and 5) immediately accessible on the first day of symptoms, without sick notes or applications.

Employer-paid sick days are good for the economy

Where permanent and employer-paid sick days have been mandated, there has been opposition from large corporations but the vast majority of employers (including small businesses) have supported them, and there is no evidence that workers have abused them. For example, when New York City mandated employer-paid sick days (including for undocumented, temporary and part-time workers), 86% of employers supported the law. The only significant abuse was some employers not providing paid sick leave as mandated by law.

But Canadian provincial governments first ignored paid sick days, and then claimed they were unnecessary because of retroactive federal income supports like CERB. After overwhelming calls for paid sick days from workers and medical organizations, a number of provinces implemented small numbers of government-subsidized paid sick days. These have helped expand access to the COVID-19 vaccine but are not universal, fully paid, adequate or temporary; and they subsidize profitable corporations whose denial of paid sick days fueled the pandemic.

This pressure has pushed the BC government to promise permanent and employer-paid sick days, but more pressure is needed to ensure they are adequate: the BC government is contemplating between 3 and 10 days and polling businesses about how many should be provided, which is like asking whether people should take a few ineffective days of antibiotics for an infection or taking the actual dose as prescribed. The movement has also pushed both NDP and Liberal parties in Ontario to table legislation (Bills 7 and 8) for 10 permanent paid sick days, plus two weeks during public health emergencies. Now the movement needs to push Ford into passing this legislation, and finally fulfilling his promise of having the “best paid sick days in North America.”

The medical evidence, and the vast majority of people across the country, support permanent and employer-paid sick days. The Liberals were re-elected on this promise, and this can’t wait. Justin Trudeau needs to translate words into action: immediately mandate 10 paid sick days for federally regulated workers, and convene the provinces and territories to develop a national action plan for similar legislation across the country. And provincial governments, from BC and Ontario to the rest of provinces and territories, need to follow.

But paid sick day policy can’t rely on myths, or subsidize corporations that have denied paid sick days and fueled the pandemic. Policy needs to be based on the medical evidence, which shows that permanent and employer-paid sick days are good for workers and the economy, and that they need to be universal, fully-paid, adequate and immediately accessible. Policy also needs to reflect the urgency of the pandemic, close the longstanding gaps in equity, and follow the democratic mandate: paid sick days now.