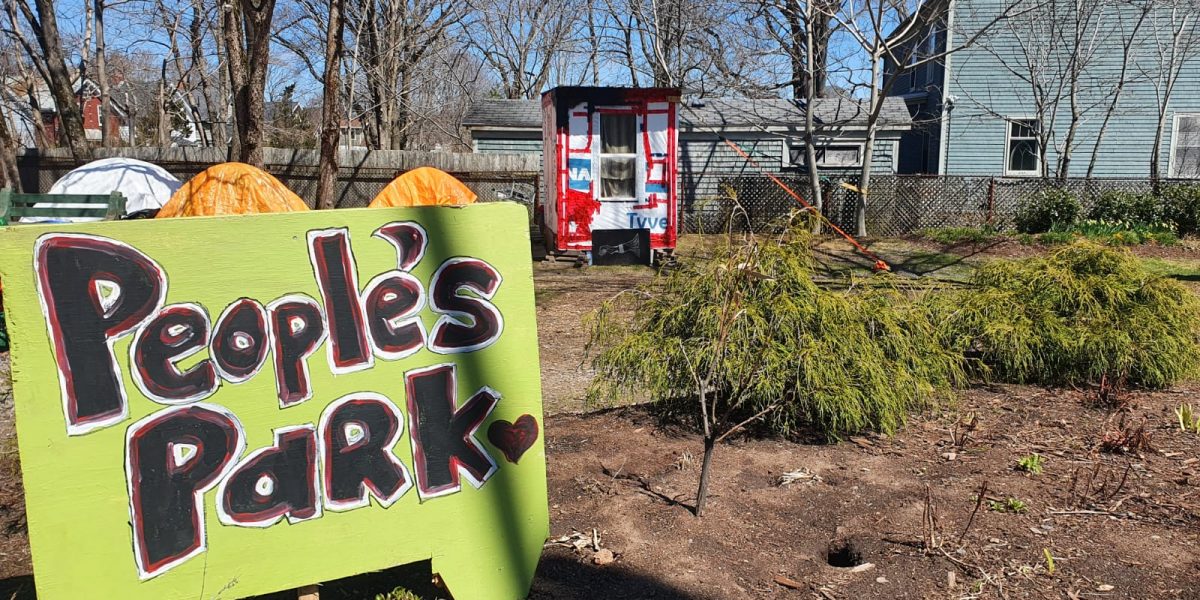 The housing crisis in the Halifax Regional Municipality (HRM) has gotten significantly worse throughout the COVID-19 pandemic. According to the latest Rental Market Report from the Canada Mortgage and Housing Corporation (CMHC), the rental vacancy rate in the HRM dropped to 1% in 2021, down from 1.9% in 2020. As of April 12, there are 544 people who are known to be homeless in the region, over 100 more than this time last year. Of those who have been homeless for over six months, nearly one quarter are Indigenous or of African descent.

The CMHC report found that the average apartment rent increased by 5.1% in 2021, with the average rent for a two-bedroom apartment found to be $1,335 per month. According to the Global Residential Cities Index, the price of a typical home in the HRM went up 30.7% in 2021, making the HRM the sixth highest in the world of cities with the highest average price growth. Meanwhile, the median hourly wage in Nova Scotia increased by 0.1% in 2021, and people living on Income Assistance have received no increase at all in the latest budget. At the same time that the cost of housing has spiked, incomes have effectively decreased compared to the rate of inflation.

While the housing crisis has escalated during the pandemic, so too have the movements to overcome it.

On April 14, the Disability Rights Coalition of Nova Scotia won a legal battle against the Government of Nova Scotia over the right to community-based housing for disabled people. The Supreme Court of Canada dismissed an appeal by Tim Houston’s Progressive Conservative government, upholding a landmark ruling that the government had systematically discriminated against three disabled people.

Beth MacLean, Sheila Livingstone, and Joseph Delaney launched a human rights case in 2014 arguing that the government was violating their human rights by having them in a locked psychiatric facility when they could have been living in the community. In 2019, a human rights board of inquiry found that the three had in fact suffered discrimination, but only as individuals. In October 2021, the Nova Scotia Court of Appeal ruled that the discrimination was systemic and is applicable to the government’s treatment of disabled people in general.

Livingstone died in October 2016, two years after the case was launched. MacLean died in September 2021, two years after the human rights ruling and one month before the decision by the Court of Appeal. Delaney is now living in a community-based setting and continues to advocate for others.

Despite Houston publicly promising his government would respect the ruling and not appeal it, they later announced in December that they would appeal the ruling of the province’s top court because it “raises questions” about how other social programs could be affected. Since the Supreme Court dismissed that appeal, the finding of the government’s systemic discrimination can now be applied to its oppression of disabled people more broadly. This is a large step toward the ultimate goal of the Disability Rights Coalition: to ensure that disabled people get access to resources and housing in the community, which as a result will bolster the right to decent housing for all.

On March 24, the first day of the Nova Scotia legislature’s spring sitting, a rally was held at Province House to call for action on poverty and homelessness. The rally was supported by the Disability Rights Coalition of Nova Scotia, as well as P.A.D.S. Community Advocacy Network and other social justice and labour organisations. Representatives gave speeches about fighting for structural change while also addressing people’s immediate needs. One speaker from P.A.D.S. said: “To address homelessness and poverty we must address oppression and the economy.”

One week later, the Government of Nova Scotia announced it would provide $195,000 to fund an overnight shelter at Brunswick Street Mission from April until June 30. Until then, the Pavilion on the Halifax Common had been used as a temporary overnight shelter for the month of March. Before that, the George Dixon Centre on Brunswick Street was used as an overnight pop-up shelter only when the weather forecast passed a threshold of being colder than -15 degrees celsius with windchill or at least 25 centimetres of snowfall. The development of the space from a pop-up shelter to a consistent overnight shelter has been attributed to collective action by unhoused people and other community members.

P.A.D.S. is now campaigning to have the HRM amend By-Law P-600 to remove the prohibition on camping without permission. In August 2021, nearly 50 people were violently displaced by the HRM and Halifax Regional Police when they removed dozens of tents and wooden shelters from parks and green spaces. People staying at the encampments were issued tickets of $237.50 for “camping in parks without permission” under city By-Law P-600. P.A.D.S. anticipates that similar situations could happen again as more people have no choice but to “camp” in parks.

On March 20, Nova Scotia ended its COVID-19 state of emergency, which has been reported to have put an end to the ban on renovation evictions. It is important to know that the Agreement to end tenancy (lease) for demolition, repairs or renovations (Form DR5) is voluntary and tenants do not have to agree to it. If a tenant does not agree, then the landlord must apply to the Residential Tenancies Program and request an Order for Vacant Possession from the Director of Residential Tenancies, which can take several months if the request is justified, and then give notice only if or when that order is granted. On the day the state of emergency ended, many tenants in Dartmouth started receiving notices from their landlords about their intentions to evict them and many tenants are opposing those attempts.

The end of the state of emergency does not mean the end of the rent cap. In August 2021, Premier Tim Houston said that he did not plan to extend interim rent control measures after the provincial state of emergency was lifted. In October, Houston announced that rent control will continue until December 31 2023. This means that tenants who signed a lease before March 20 cannot have their rent increased by more than 2% per year, including any fees contained in the lease. Anyone who receives a rent increase of more than 2% can contact Dalhousie Legal Aid Service or Nova Scotia ACORN for support.

When rent control was first announced in November 2020, that was also the result of the government being forced to reverse its decision. Less than one month before, then Premier Stephen McNeil said his government was not considering implementing rent control measures. Between those announcements, Nova Scotia ACORN mobilised hundreds of people in support of rent control, building on nearly 10 years of work campaigning on the issue. The forced reversals of both McNeil’s and Houston’s decisions on rent control show how it is possible for tenants to successfully exercise collective power to fight for housing justice.

On April 11, Adsum for Women & Children raised the last roof on The Sunflower, a development project that will provide 25 new homes for women, families, and gender-expansive people facing homelessness and housing insecurity. It is one of three housing projects approved to share $8.6 million in federal funding alongside the Mi’kmaw Native Friendship Centre and the North End Community Health Centre.

The Mi’kmaw Native Friendship Centre (MNFC) support building, dubbed The Diamond Bailey House, is also nearing completion. The Diamond Bailey House was originally planned to have 32 emergency beds on the main floor, 11 bedrooms on the second floor, and 10 bachelor units on the third floor, but those plans have since changed. The MNFC shutdown its shelter program suddenly in December after its employees filed to join a union. The executive director of the MNFC said of The Diamond Bailey House: “It will not be a shelter. We tried the shelter, that failed miserably.” With the hope of beginning in July, The Diamond Bailey House will now be a graduated program where each participant will go from a boarding room, to a bachelor room, to the eventual goal of going into longer-term housing.

The North End Community Health Centre is converting the former Dartmouth Travelodge into a supportive housing project called The Overlook, operated with the Affordable Housing Association of Nova Scotia. The Overlook will have about 65 units for homeless adults, including those who struggle with addictions and people just released from hospital. The building will include a pharmacy, a drop-in centre for tenants, a counselling centre, a library, a cafe, and a community kitchen. Under the rapid housing initiative, funding for this project is conditional on it being completed within the year.

Beyond the private housing market

Although non-profit organisations are funded to engage with people who are excluded from the formal economy, all levels of government are largely beholden to the private housing market. The Nova Scotia Budget 2022-23 allocates $15 million more for “affordable housing programs,” but does not specifically commit funding for non-market projects like housing co-operatives, non-profit housing associations, or public housing stock. The budget also allocates $2.7 million more for new rent subsidies, effectively handing over public money to private landlords.

The provincial budget does not reflect the recommendations from ‘Keys to a housing secure future for all Nova Scotians‘, proposed by The Housing For All Working Group of the Canadian Centre for Policy Alternatives – Nova Scotia Office (CCPA-NS). The report calls for the creation of more than 30,000 permanently affordable housing units in 10 years, and outlines a fiscal framework that includes tax measures designed to create an additional $515 million in revenue each year. The report’s research shows that the province could make meaningful investments in non-market housing yet continues not to.

Similarly, the Government of Canada’s Budget 2022 treats housing as more of a commodity than a public good. The federal budget allocates billions of dollars to “speed up housing development”, notably using the term “affordable housing” and not ‘social housing’. While the budget commits $500 million to expanding co-operative housing, it mainly focuses on promoting home ownership as part of a mythical national dream. The budget also includes a “Ban on Foreign Investment in Canadian Housing,” falsely identifying investors from outside of Canada as contributing significantly to rising housing costs and detracting from the fact that the vast majority of property investors are local.

To overcome the housing crisis we need to act on more than just the symptoms and fully address the root causes. In ‘Homelessness during a pandemic: Learning lessons for disaster preparedness in Nova Scotia‘ from CCPA-NS, the authors remind us that homelessness was a disaster before the pandemic, and that the pandemic magnified existing inequalities and surfaced more. The authors ask: “Can we strive for a post-COVID-19 world in which we prioritize dismantling systems that ignore systemic oppression and the root causes of homelessness?”

As Joel Roberts puts it, fixing Canada’s housing crisis will require bold socialist politics. The solution for housing is to transform the underlying economic system, starting with a large-scale shift toward more social housing and non-market land acquisition. Given that the current market-based housing model ultimately serves the rich and powerful, the transition to community-based models of housing will require a broad shift in power and total societal transformation. The steps toward that need to be discussed, tested, and escalated through struggle while we fight for housing justice together.