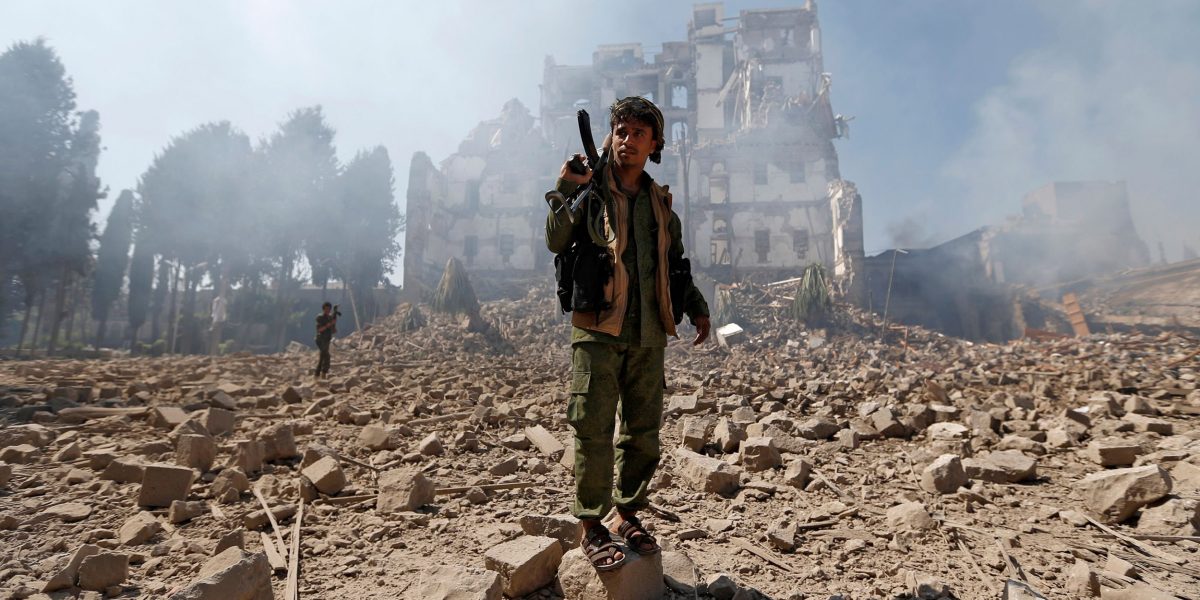 The war in Yemen has been going on for seven years now, can you explain what the scale of the conflict has been? And what role has Canada played in the conflict?

The scale of the conflict, and the human suffering it has caused, is enormous. Almost 400,000 Yemenis have died. Over 4 million people have been displaced. 70 percent of the Yemeni population, including close to 12 million children, are in desperate need of humanitarian assistance.

The Saudi-led coalition has routinely bombed Yemeni civilians and civilian infrastructure, including markets, hospitals, mosques and water treatment facilities. In 2018, a Saudi warplane bombed a school bus full of children, killing 40 and wounding many more. The Saudi land, air and sea blockade has caused massive fuel and food shortages. Saudi Arabia is using starvation as a weapon of war.

Despite all this, Canada has exported $8 billion of weapons to Saudi Arabia since 2015, the year Saudi began its military intervention in Yemen. This is part of Canada’s $14 billion contract to provide the Saudis with light armoured vehicles–manufactured by General Dynamics Land Systems in London, Ontario–a deal signed by the Harper Conservatives but upheld by the Trudeau Liberals. However, it also includes weapons like sniper rifles manufactured in Winnipeg. There is clear evidence that Saudi forces have deployed Canadian-made weapons in the conflict in Yemen.

The UN Human Rights Council’s war crimes probe has twice named Canada as one of the states fuelling war in Yemen with arms sales to the Saudis. The brutality of the Saudi-led coalition is something hidden from Canadian eyes, as the mainstream media has largely ignored the suffering of Yemenis and Canada’s complicity in it.

Currently what is the position of the Liberal government towards the war on Yemen and Saudi Arabia?

Two weeks ago, the Liberal government announced $62.5 million in humanitarian aid for Yemen, a fraction of the worth of arms sales of Saudi. The Liberal government says it supports peace and a political solution to the conflict, but has brought zero pressure, diplomatic or otherwise, on the Saudis and UAE to bring an end to war. If it was serious about peace, the Trudeau government would stop arming Saudi Arabia. It’s quite simple.

While the Liberal government calls out Russian war crimes in Ukraine, it remains silent on western-backed Saudi war crimes in Yemen. We must say clearly that we reject this international division of humanity into worthy and unworthy victims of war.

The Conservatives, Liberals and NDP all support increasing the military budget, how does the LAAT view this?

Humanity faces multiple and overlapping crises: war, climate, capitalism, care, inequality. The solution to these crises is not to be found in militarization and expanding military budgets. Labour Against the Arms Trade will work with our allies in the labour movement to oppose any increase in Canada’s military budget. This means difficult conversations and organizing with unions whose members may stand to materially benefit from domestic procurement of weapons and equipment for the Canadian armed forces. But these are the conversations and organizing we have been doing for just over two years now.

Can you tell us a little about the scale of Canada’s arms trade in the world? Is it increasing or decreasing? And what does this tell us about our government’s international priorities?

Compared to the United States, Russia and countries like France, the arms industry in Canada is relatively small. A 2018 study of the defence sector found that it contributed $6.2 billion in GDP and 60,000 jobs to the Canadian economy. Between 2016 and 2020, the main recipients of Canadian arms exports were Saudi Arabia, accounting for 49 percent of all arms exports, and the United Arab Emirates at 17 percent. However, arms exports to the USA are not tracked. Canada is very much a subordinate ally in US imperialism, and an imperial power it its own right. So Canada’s arms industry is less about job creation and more about Canada maintaining this role vis-à-vis US foreign policy. We are a junior partner in the American empire and our arms industry is a junior partner in the American military industrial complex.

Can you provide some information and details about the Canada-Wide Peace and Justice Network’s Day of Action? How can people get involved?

There are actions online and in cities across the country, including Toronto, Vancouver and Montreal.  But folks can take important action online by emailing their MPs and looking out for further actions that will target businesses complicit in the export of arms to Saudi Arabia. People can find more info and stay up to date here: https://peaceandjusticenetwork.ca/canadastoparmingsaudi/

Can you discuss the promise of repurposing the Canadian arms industry’s resources for socially useful production – and winning a just transition for arms industry workers?

Let’s look at General Dynamics Land Systems in London as an example. The highly skilled workforce at GDLS, members of Unifor Local 27, could use their skills and capacities to build the kinds of technologies and infrastructure we need to mitigate the impacts of climate change, anything from renewables tech to high-speed rail cars. If you stand at the plant gates as workers finish their shift and ask workers: if you were paid the same wage, same benefits, were members of the same union, and you had the choice between manufacturing weapons destined for Saudi Arabia’s brutal war in Yemen or manufacturing green technologies that are society needs to needs to mitigate the impact of climate change, you will not find a single worker who says they would rather manufacture weapons of war. But under capitalism, workers don’t have that choice. The boss decides what to produce, when and how.

So we have to fight for workers to have that choice, to ensure we have green peaceful production that protects workers, their communities, and the planet. This means demanding governments ensure a just transition for arms industry workers when we demand an end to arms deals like the one with Saudi Arabia. It means pushing governments to invest in the conversion of arms manufacturing plants to green peaceful production. And ultimately, it means questioning the logic of production for profit and thinking about production for social need, planning and so on. That means challenging capitalism. Arms industry workers and their unions are not the obstacle to realizing this vision, the bosses, and the economic system they benefit from, are.