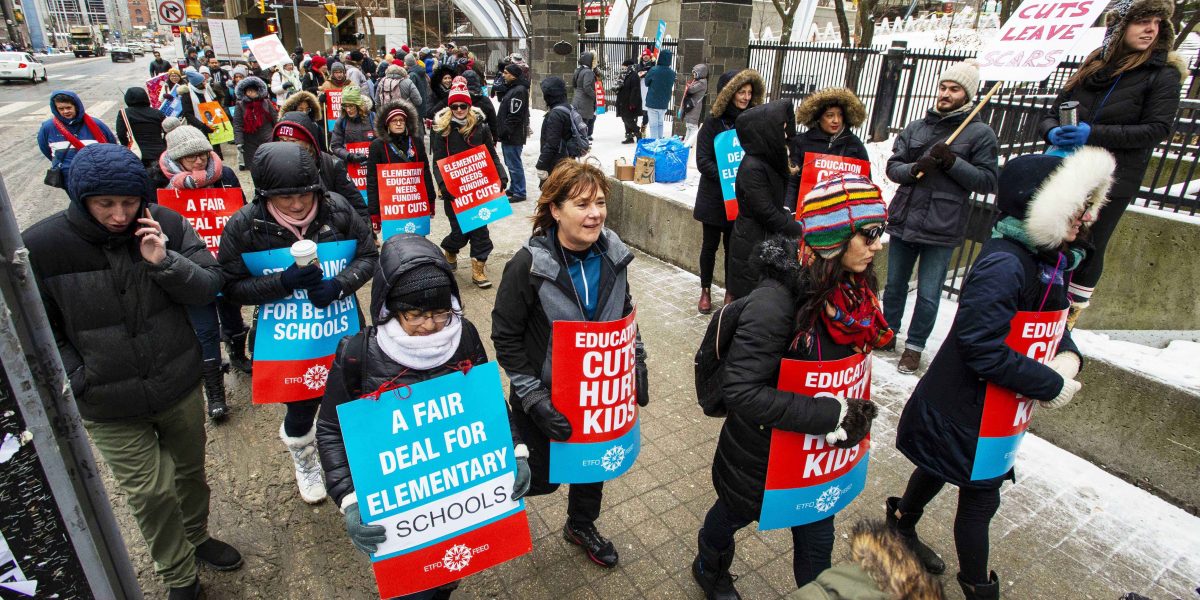 The Ontario education unions (ETFO, OSSTF, OECTA and AEFO) representing teachers and support staff in elementary, secondary, catholic and French-language schools, have been in bargaining with the Ford government since last summer. After months of fruitless negotiations and the government’s insistence on concessions and damaging policies, all four unions began job actions culminating in a number of full one-day strikes across the province. While different job actions and rotating strikes have been occurring for a number of weeks, this coming Friday is the first time that all four unions are striking together. This means that on February 21, over 200,000 teachers and education workers will be out on strike and all public schools across Ontario will be shut down in one of the biggest teacher strikes in North America.

Why are the teachers on strike?

Since last year, the government has introduced major cuts to school boards and announced their intention to increase class sizes, remove full-day kindergarten, reduce funding and support for autism programs and students with special-needs, implement mandatory e-learning (with plans to use it as a privatizing and revenue –generating tool in the high school system as revealed in a government document leaked earlier this year) and more. After months of negotiations the government has yet to meaningfully move on any of their detrimental policy propositions and the teachers and education workers have made it clear that they will not stand down and allow for this onslaught on Ontario’s public education.

Over the recent weeks, the government has chosen to not bargain at the table and instead focus on a propaganda-filled public campaign to undermine the teachers and create a narrative of money-hungry education workers and union bosses; an image that could not be further from reality in the current moment and the continuous public support if the teachers is a testament to its failure.

Teachers or the Tories

Poll after poll has shown overwhelming public support for the striking teachers among parents, students and community members. But how do we ensure that this support is organized into a force that will propel the teachers into a victory against the government?

This coming week is an important moment in the teachers’ struggle. The Ontario legislature will be back in session on February 18. This is both an opportunity and a threat. The reconvening of the House opens the door to the possibility of the government introducing legislation either to force the unions back to work or to potentially impose a deal on them. But it also offers an opportunity to turn up the heat on the elected MPPs and to force the government to revoke the the cuts and support a fair deal.

After months of job actions by education workers it is unlikely the stalemate between the teachers and the government continues much longer. The coming days and weeks we are likely to see either the Tories or the teachers emerge victorious. This is why this week it is so important that working people across Ontario show support for the teachers. A victory for the teachers would be a major blow to Ford’s austerity agenda.

The week starts with a rally organized by the Ontario Autism Coalition rally at Queen’s Park. On Friday the entire Ontario public school system will be shut down and in addition to the teacher picket lines up across the province, the Ontario Parent Action Network will be rallying at Queen’s Park at 11am. On Saturday there is a labour-led rally in Niagara where the Progressive Conservative convention will be occurring.

Now is the time for every single person who supports the teachers and opposes Ford’s cuts to show solidarity. No act of solidarity will be too small. Consider sending a quick note to your colleagues tomorrow and inviting them to join you for a lunch time picket line visit near your workplace, or try calling a family member or friend who is a parent and encourage them to join a picket line on Friday. If going out on Friday is not a possibility, then think about other ways to show your support. Wear #RedforEd and post a message of solidarity on your social media or send an email to your MPP, the Minister and Premier.

For those who work in or belong to a union or community organization, this week is the time to go beyond the usual solidarity statement or mass email to members. Pick up the phone or send a message to individuals you know who could be organizing a small delegation for a picket visit. Encourage them to do so and give them the tools they need (information on picket line times and locations, a template message they can share with their network, signs they can take with them, funds for purchasing food or beverages, etc.). A gentle nudge or an encouraging note is sometimes all it takes to get people moving. Any act of visible solidarity will be immensely valuable.

This Friday and Saturday are big organizing opportunities for the working people of this province. Let’s not waste them! Each and every picket line and action on Friday can and should be filled with supporters. If you are in Ontario, please sign up for a bus to the Niagara rally on Saturday. The teachers and education workers can win and we all have a responsibility to help them.