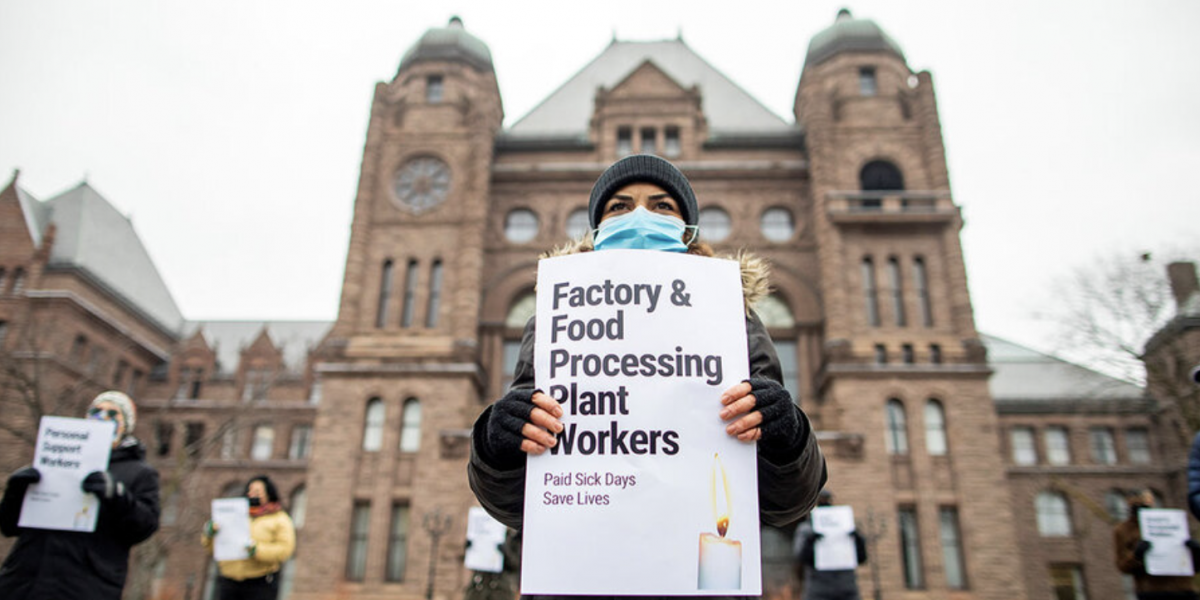 Entering year three of the pandemic, case counts have exploded, admissions to hospitals are rising, ICUs are filling up and our public services are at their breaking point. Workers are breaking their backs and risking their health to churn out profits and sustain an illusion of “normalcy.”

No paid sick days, no testing, no PPE

When Omicron broke out, Ontario quickly followed the CDC’s lead in shortening the isolation period to 5 days for people with COVID – despite Omicron being peak infectious during 3-6 days after the onset of symptoms. The CDC argued that workers were simply not following the 10-day isolation guideline. But without access to paid sick days, this was a no-brainer: the 10-day isolation would mean workers would have to choose between staying home or losing wages.

Instead of mandating 10 paid sick days, Ontario gave in to the business lobby who wanted their employees to keep funneling production with minimal protections, lacking mass access to N95s, PCR testing, or adequate PPE.

Businesses don’t care if workers or their children are sick and there is no one at home to care for them. By listening to the business lobby, the Ford government has stripped low-wage workers of respect and dignity in order to protect profits.

And this time around, there is no contact tracing to identify workplace outbreaks in congregate spaces, such as fulfillment centers and meatpacking factories. Schools are being asked to notify parents only after 30% of a class is absent. The dangerous lack of transparency in Ontario’s COVID-19 reporting only adds to this government’s long list of inadequacies.

Paid sick days would not only protect workers – it would protect all of us. The more this virus spreads, the more chances of a new variant emerging. And if the pandemic has made anything crystal clear – no one is safe until all of us are.

At least in the first wave of the pandemic, the federal government moved fast to introduce the Canada Emergency Recovery Benefit (CERB)  bosses called front line workers “heroes” and gave them pandemic pay. In the Omicron wave, the motto seems to be “live and let die.”

The federal government recklessly decided to end Canada Recover Benefit (CRB) last October with little to no acknowledgment of the fact that the pandemic was far from over. Now in the worst wave so far, most workers are too sick to work – and in lieu of adequate paid sick days, face the reality of losing wages. Many more are not able to get enough hours or are out of jobs due to capacity limits and lockdowns.

At this moment, it’s imperative for the federal government to reinstate CERB and provide at least $500/week to workers who are being disproportionately impacted from the pandemic.

Big businesses are now calling for migrant workers to fill up a “labour shortage” that was caused by poor working conditions. This means bosses are looking to take advantage of workers with temporary immigration status and little access to employment benefits and protections.

Canada’s immigration system is designed to exploit racialized labour from the Global South to serve the interest of Western capitalism. Migrant work is essential and socialists must challenge the idea of borders as a tool for controlling and exploiting labour.

We must demand equal status for all workers and fight to ensure that migrant workers have access to the same rights, benefits, and dignity.

Capitalist conditioning has normalized a perverse state of affairs: that the rich and wealthy can stay home when sick, while low-wage workers without any labour protections deliver their groceries. We have normalized not seeing our families for holidays for two years at a stretch, but taking a crowded bus to factories and warehouses for our bosses.

We have normalized corporations profiting off the pandemic while workers have taken the blame for everything – inflation, supply chain hold ups, the labour shortage. Meanwhile, the rich have been getting off scot free. Canada’s top 100 CEOs made 191 times more money than an average worker during the pandemic – the second highest salary pay ever in the country’s history.

We need to demand 10 paid sick days for all workers, immediate income support, and permanent status for all. These are basic rights. Workers cannot continue to be wronged by pandemic profiteers. They shouldn’t be asked to die on the line, working sick, while yet another CEO gets their income tripled and yet another billionaire takes a joy ride to space.

Enough is enough. It’s time to get organized, build solidarity and fight back.

Join Justice for Workers’ workshop on Building Worker Power to get involved.