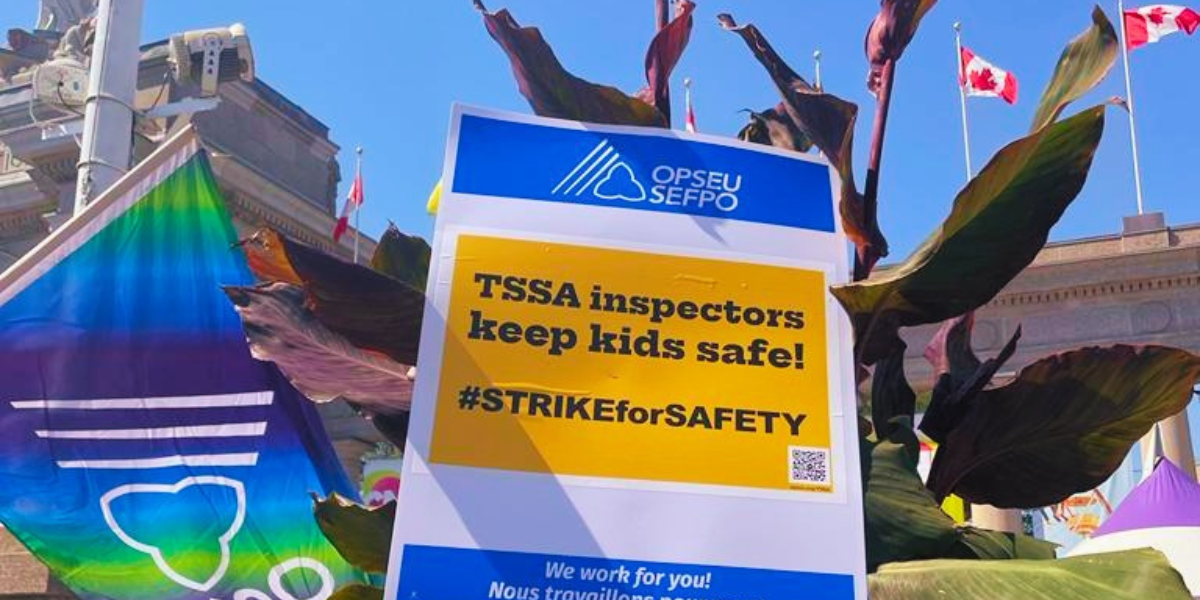 The Euroslide is usually a staple of the much-loved CNE, but not this year. Days before the exhibition opened for the first time in two years, the ride broke down, and sent someone to the hospital in the process.

Inspecting the Euroslide, along with the other rides at the CNE, is just one of the many jobs that safety inspectors normally carry out. These workers inspect everything from amusement park rides and food trucks, to elevators and nuclear power plants across the province. They are the front-line workers for the Technical Standards and Safety Authority (TSSA), a private, not-for-profit corporation set up by the Mike Harris government in 1997 as a ‘cost cutting’ exercise. The TSSA replaced the safety and standards functions of the Ontario Ministry of Consumer and Commercial Relations (now known as the Ministry of Public and Business Service Delivery) and is no stranger to controversy.

In 2021, the TSSA safety inspectors, numbering more than 170, joined together and won their union drive, becoming members of the OPSEU/SEFPO Local 546. They unionized to resolve a host of inequities and mismanagement in their workplace and have been bargaining with the TSSA for their first contract ever since. On July 21, 2022, their employer walked away from the bargaining table. The workers were left with no choice but to go on strike to achieve their first contract. Key issues in the negotiations include wages, benefits, understaffing, and improved accountability for public safety standards from the employer. As explained in an update from the union, many of the negotiations are centered around whether or not to maintain aspects of the current company policy. For instance, the workers want to maintain current overtime rates, the ability to carry over vacation days, and flexible scheduling, and their employer wants to roll them back.

The TSSA has repeatedly expressed that they are acting in “good faith”. Of course, saying you’re acting in good faith is not the same as acting in good faith. This rhetoric is a way to shift the conversation away from the concrete. Like any labour dispute, this conflict stems from a disagreement over what the workers deserve. The employer thinks that the workers deserve less overtime, less vacation days, and less flexible scheduling. Naturally, the workers disagree. If the TSSA is actually interested in engaging honestly – ie. in good faith – then they should explain why their position is defensible. Instead, they have hired 20 non-certified inspectors to scab during the strike. Their actions, not their words, show how they really feel.

While the safety inspectors wait for their employer to come back to the table, actions continue to be held in solidarity across the province in places such as Belleville, Kingston, Sarnia, London, Waterloo, Corunna, and Toronto. The pickets held at the CNE in Toronto have garnered an especially significant amount of attention and support. The striking workers have repeatedly raised concerns about the safety of the exhibition rides and the qualifications of the non-union staff and third party contractors who have been brought in to do the inspections in their absence.

These concerns gained further traction when the Euroslide broke down and injured a CNE worker. CNE CEO, Darrell Brown, insisted that the accident “has nothing to do with the strike” and that “equipment malfunctions sometimes”. Sure, and sometimes accidents are avoided when the people who know how to do their job are able to do it. As bargaining team member Cory Knipe noted, “the supervisors [non-union staff] have not been out on the road for a while, they normally do office work more than anything. The [union] inspectors, that is their everyday job, when we go out there, we’re checking the nuts and the bolts and what comes loose.”

As the strike is prolonged by the TSSA, another concern from workers is the delaying of elevator inspections. Safety inspectors are responsible for examining more than 60,000 elevators in the province. When they are unable to do their jobs, dangerous situations arise. Residents of a London apartment building are going through this first hand as they continue to wait for a delayed elevator inspection. The nine-story building has been without elevator service for six weeks and residents are understandably getting frustrated. The situation has been particularly dire for seniors and folks with mobility issues. Matt Walsh, a resident who lives on the seventh floor, has said that “it seems we are getting shuffled to the bottom of the deck.”

Breaking through the stonewall

The TSSA appears unconcerned with the people at the bottom of the deck. As the strike enters its fifth week, they continue to dig in their heels and refuse to come back to the table to hammer out a fair deal. The union made another offer to the employer on August 19, and was met with radio silence according to an update provided by the union four days later. This continues a pattern of “stonewalling” that workers say has been constant through the negotiation process.

Right now it’s anybody’s guess when a deal will be reached, and if it is reached, will it be a fair deal? One that respects the work safety inspectors have done for decades to keep our amusement park rides, elevators, and much much more safe. What is certain, is that they join a burgeoning movement of workers who have had enough of being pushed around by their employer.

Like many on the front-line during the pandemic, safety inspectors were told they were essential as their employer worked them into the ground. Now, they are trying to dig themselves out, and their employer is telling them they are disposable. It isn’t working though, like a growing number of workers, the safety inspectors know that they are essential and they’re willing to fight for the working conditions they deserve.