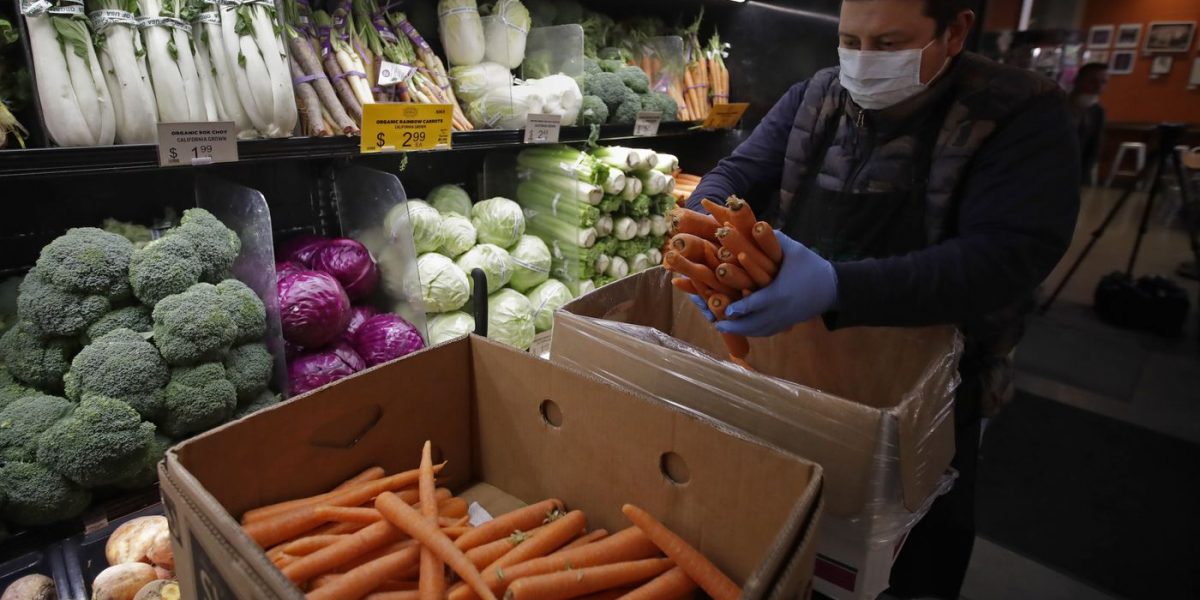 Workers who once had job security and benefits are turning to increasingly precarious frontline positions in “essential” sectors during the pandemic. They face the stress of exposure to the virus and very low wages. While many temporary “pandemic pay” provisions have been revoked, grocery store profits are at record highs. Spring spoke with a worker in the entertainment industry who took jobs in a grocery store and food packing plant over the summer as regular job opportunities disappeared. He revealed his concerns about COVID-19, abusive management, the possibilities for solidarity and organizing, and the fundamental injustice of our current system. The worker has asked to remain anonymous for the published interview.

Can you tell me a little bit about yourself? What did you do before COVID-19, and what have you been doing to get by since it started?

Right before COVID, I was just hired at an office that does corporate staff and management training. Prior to that, I’d made my living as a performer, primarily, for about 25 years.

Since the pandemic broke, where have you been working?

That office job obviously closed pretty quickly, and all work related to film, television or theater shut down. All those industries were completely shuttered, so I put myself out there for anything that was available. I found work stocking shelves at a grocery store chain, and at an organic food delivery company, at a warehouse, packing food boxes for home delivery.

Thinking about some of the coworkers that you had, did you notice any demographic patterns? Did you just see a cross section of society?

The common thread is income, I would say. Both jobs were low wage employment – minimum wage for the shelf stocking, and a few dollars an hour more for the warehouse. Some staff were new immigrants, or people for whom English is not their first language. There were quite a number of them stocking shelves, or working in produce, meat or fish departments, stuff like that. As a white male in my 40s, I was the oddball out. I don’t think anyone, including the manager that worked there on site, was older than 30.

Did you receive any kind of a temporary raise, like the pandemic pay that some frontline workers got?

There was pandemic pay, which amounted to $2 an hour in additional wages, which was dropped in June. In the grocery store, the workers, the regular staff anyway, are unionized, but COVID [provided] a certain allowance to hire, quote unquote, “temporary essential workers,” is the term.

And that was used very clearly when I was hired for grocery stocking, with the store owner/manager asking what I was looking for in terms of employment. When I said “part time”, he said, “yes, so temporary, temporary.” He kept phrasing it that way. Because it allows them to hire at minimum wage, as opposed to the union wage rate – where an added $2/hr is still a savings for them. I realized that I was basically a compromise allowance to management to allow for me to exist as a temporary worker.

How does it feel to see some of these giant grocery stores or companies like Amazon making these huge record profits and then all the grocery workers and drivers and so on are barely getting by on such low wages?

It’s disappointing, especially when management chooses an abusive style of leadership. The grocery job was managed by franchise co-owners, who were partners. The partner that hired me was kind of zen, and like, “You know, whatever works for you.” He was very understanding about scheduling, and he was fine to work with. The other partner, however, was unbelievably mean. They would flat out yell and berate you, shouting at you to “Do this!” and “What are you doing?” and “Do that now!” and “Don’t do that. Put that away!” and “Do this!,” you know? No “thank you.” No kindness.

But how does it feel? Really quickly you’re able to see, because the grocery places are big chains, that they’re seeing an increase in profits, pretty clearly. They’re selling more than ever. And while they’re taking that money and hiring people, which is, in their framing of it, the “trickle down,” but they’re hiring people at minimum wage, with no bonuses. The work doesn’t dictate your wage, you’re just getting that, no matter what. You’re getting minimum wage, no matter what kind of effort you put into it.

In many parts of the country when the pandemic first hit there were these public celebrations of frontline workers, people making noise and banging pots and pans and all that. Did you feel included in that recognition?

I did, I guess, yes. Knowing that I was doing what I was doing, [people] put it out there that they were thanking me, which is a strange feeling because it does feel a bit hollow, because I was just sort of doing a job where the risk is high and the pay is low, and no one seems to be up in arms about that systemic problem. Did I feel included in the celebration? Yeah, I guess. People were thanking me, sure. But it still doesn’t make me feel good. It’s a very hard job and the wages are not great. So as far as risk and reward, it’s just really what I’m doing to get by.

There’s this narrative that, similar to healthcare workers, grocery store workers and delivery drivers are heroes, because they’re key to the maintenance of the country’s food supply. But there’s also this counter-narrative in which some people have been saying well, “These workers are more hostages than heroes, because if they quit they wouldn’t be able to afford to eat themselves.” How do you feel about that?

It’s tough. It is definitely exploitative, that’s for sure. It’s a weird feeling, because we’re working to get people food, and in that sense, it’s essential, for sure. But a lot of the time it’s not — you know, like high-end things, things that are not necessities. It’s more about being someone working in the chain to supply people with better wants and desires, things that they want to consume more than the necessities. And so the praise and the thanks is more about what feels like you’re holding up the status quo. You’re just a stopgap so that things can quote unquote “return to normal,” and then that “normal” still maintains a really steep inequality curve.

You mentioned that one of your workplaces was unionized, but do you think that there may be opportunities to organize out of this crisis? Not just unionization, but in terms of a broader social movement towards better pay or benefits for people in these positions, or do you think things will just go straight back to “normal”?

That’s a great question. I’ve been disheartened a little bit by people. I see the divide, I guess. Without accusing anybody, but in the performing arts, I see that divide in the willingness to band together for collective interest. I see divided self-interest in people of varying levels of privilege and comfort. So, I think yes, there is definitely an opportunity, absolutely. But it’s a challenge, because I think the stress and the crisis definitely drives people to resist that a little bit. I think information and education is a key part of that, and then hopefully people — the collective power, the collective will, I think always comes through.

What would you like the public to know about the challenges that workers like you are facing right now?

I’d just like people to be considerate, and try to understand that working in this pyramid model of earning income really just takes away from quality of life. It really does. It basically just means you’re working, getting home and sleeping. If you have quality of life, if you are someone that has the freedom or privilege to enjoy that, just try and look for ways to help support allowing everyone to enjoy that same freedom.