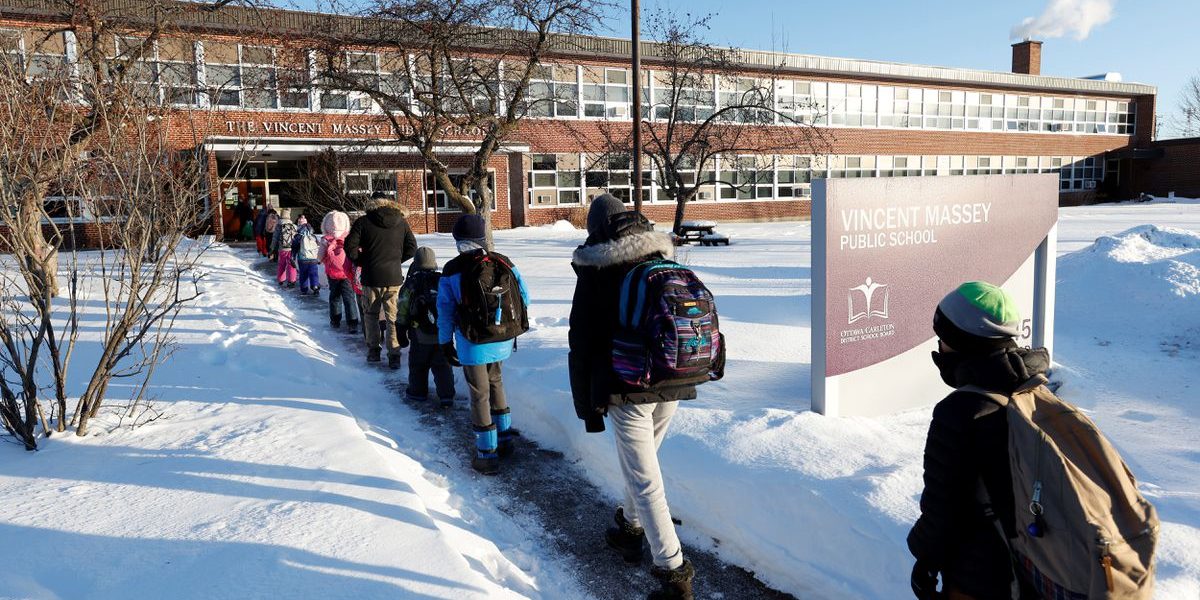 The Ontario government’s handling of the education system during the pandemic has been roundly critized by parents, educators and students for failing to adequately fund and plan for safer schools. Too often parents and educators have been left in the dark about the government’s ever-changing plans. As Ontario schools open up for in class learning this week Spring Magazine spoke with elementary teacher Anna Jessup about the school reopening plan and why they are refusing unsafe work.

What do you make of the province’s reopening plan? It seems like everything’s been last minute and very little consultation with teachers.

AJ: It is an object lesson on why capitalism is ill-suited to manage public health. All we see is short-term planning if we see any planning at all. Ford is loud about being, “Open for business,”  but all capitalist governments are like this. They help big businesses make money now. They want parents in the workforce now. Children are in the way of this, so they’re sending them back to school, regardless of the danger this poses to their lives. The decision is criminally negligent in my opinion.

In terms of consultation, well, we teachers get the updates when you do, from the news.

Did the two-week closure change anything? And why do you think the government is sending students and teachers back to school in the midst of the Omicron wave?

AJ: It gave us time to observe things getting worse. I think they are reopening schools because our economic system is not designed to do anything other than force people to work through a pandemic, safe or not, sick or not. To make schools safe would require a massive investment in staff and infrastructure to allow for proper spacing, testing, reporting and sanitation. It could be done, but it would cost money. And big businesses don’t like to pay taxes.

AJ: It isn’t just unsafe for me, it’s also unsafe for the children who I teach. Going in right now would mean legitimating, a decision that I know to be dangerous to the lives of children.

For support, I have relied mostly on coworkers in a group called Ontario Education Workers United (OWEU), which is organized outside my union, as well as folx in the Ontario Parent Action Network (OPAN).  I am also grateful to the health and safety representative in my union, who called me back right away and promised to stand beside me while I refuse work.

Have other teachers also collaborated together to refuse unsafe work? And if not, why do you think more teachers haven’t taken this stand?

AJ: I have been in touch with other teachers online and some shared with me that they are doing the same. The form letter that I used for work refusal, came from Ontario Education Workers United. I think that more teachers would take this stand if the medical information from the government were more transparent and clear. I also think that we have a lot of organizing to do, to ensure that education workers are protected by the solidarity of their coworkers in order to make such a decision.

What will the province’s decision to open back up mean for staffing levels in schools? (It seems like it was already difficult to get substitute teachers)

AJ: For years, I have wanted to sound the alarm on dangerous levels of understaffing in our schools. The public teacher local in York Region held a series of public meetings about three years ago, on the high levels of violence in classrooms. They showed the protective equipment that is given for teachers to wear, not to students, mind you, only to teachers. But teachers have been complaining about high levels of violence for years now. Overcrowding and understaffing are key to this problem. Recent supply teacher shortages have created an atmosphere of ongoing crisis in many schools. Reopening during Omicron will make this worse.

How will the province’s plan be affected by occasional teachers and EA’s who effectively don’t have access to paid sick days?

A: I do not want to speak for occasional teachers or EAs. But as a coworker and as a parent, I want them to have paid sick days, to help keep all of us safe. To deny them paid sick days, is economic coercion, to work while sick, despite danger to themselves and others.

What would make you feel safe to go back to work?

AJ: To go back, I want to know that the environment is safe for me, as well as for the students. In the short term, for me, that means that Omicron infection rates need to come way down. I want to see adequate air filtering and ventilation in all classrooms, enough staff to supervise children with ample physical distancing, as well as rigorous testing, contact tracing and reporting of infection.

Another thing to remember is that cutbacks have left us with crowded classrooms and insufficient adult supervision, especially in special education classrooms. These children, already struggling with the challenges of their diagnoses, are forced into crowded learning conditions which are the opposite of what they should receive.  Sometimes they act out violently. Under these conditions, it is unrealistic to think that we can enforce proper masking among the children.

How long have you been a teacher? What motivated you to become a teacher and how do you approach your pedagogy?

AJ: I’ve been an elementary school teacher for 17 years. Palo Freire and bell hooks are the two thinkers who have most influenced my teaching. I chose to become an elementary school teacher because children’s spontaneity keeps me lively. It is also a job that allows for a lot of creativity, and however diverse your interests may be they can find a place in the classroom. My ultimate goal as a teacher is to help young people build a better world that suits them. Regardless of the age group I teach, every subject from language to math to drama to art falls within that commitment.

What kind of community activism have you been involved in? And how does your work in the community influence the way you teach?

AJ: As an eleven-year-old kid I used to walk around my neighbourhood carrying petitions. My friends and I started an environmental club in grade 6. We supported a successful campaign to stop a local woodlot from being sold to a land developer. York University was my first exposure to committed left-wing activism. It was a formative experience for me to learn from the activists there and I am grateful to them. As a teacher, I’ve worked with colleagues to develop community organizing projects in our union. But as homelessness has become more rampant and especially since the pandemic, I’ve moved away from bureaucratic political spaces and joined people who are organizing openly in the streets. I was privileged to volunteer with the Encampment Support Network at the beginning of the pandemic. Right now I volunteer with an amazing group of people who gather weekly in front of Metro Toronto Police Headquarters called, Fund our Communities Defund the Police (FCDP). I also come out to support the people at Dundas and Yonge, Land Back Square.

Community organizing has taught me the importance of ensuring everyone’s opportunity to lead and be heard. It is part of the glue that holds communities together. Ensuring that there are more of these opportunities has made my classroom a happier space.

The pandemic has exacerbated preexisting inequities for low-income and non-white students. How have you seen that play out in schools?

AJ: I can’t speak for what all teachers observe, but many teachers I know observed the most marginalized students not returning to school online, when the pandemic first hit. I personally think that school push-out rates have risen a lot since the pandemic. I think they would have gone up anyway because of the devastating cuts that came shortly beforehand, but the pandemic made things worse. I’ve heard teachers talk about an eerie silence, referring to the number of students who seem to have just been pushed out of the school system completely.

A skeleton crew education system like we had before COVID, relies on the hidden funds of every child’s family. Who can afford a babysitter? A tutor? A nice computer? Or during the pandemic, multiple chrome books that get banged up by children and their siblings? Which children are sharing a small bedroom with their young siblings while trying to attend class? Also, it is a huge undertaking for a single working parent to get children off to school in the morning, even at the best of times. For a single parent to work at home all day long on the computer while supervising young children through online classes is unrealistic.

By refusing to pay the money to make schools safe, our government has made it virtually impossible for a child to get an education without substantial social and economic resources at home.

It seems like there are objective conditions for solidarity between the majority of workers who are being forced to work during the pandemic, but we haven’t seen much collective action. Why do you think that is? And what could that collective action look like?

AJ: Capitalist structures make people feel alone and afraid of speaking up. We need to have faith that others will appreciate it if we speak up. I think it is particularly important to rally around precarious front line workers, migrant workers most especially. Personal support workers, health care workers, service industry workers, warehouse workers all need solidarity. Now is the time to rally around the most exploited workers, raise their wages and ensure they have paid sick days, because community spread results from their exploitation and inability to stay home and get well. We must also not forget prisoners, who live amid rampant COVID spread, and are for the most part, victims of systemic racism and poverty.

An anti-racist and socialist society is much more suited to managing public health and wellbeing for all. The fight against racist colonial capitalism and racist state borders has an epidemiological dimension. Racist, capitalist exploitation spreads disease. COVID has exposed this in a unique way, so let’s be clear about the world we want and fight for it.