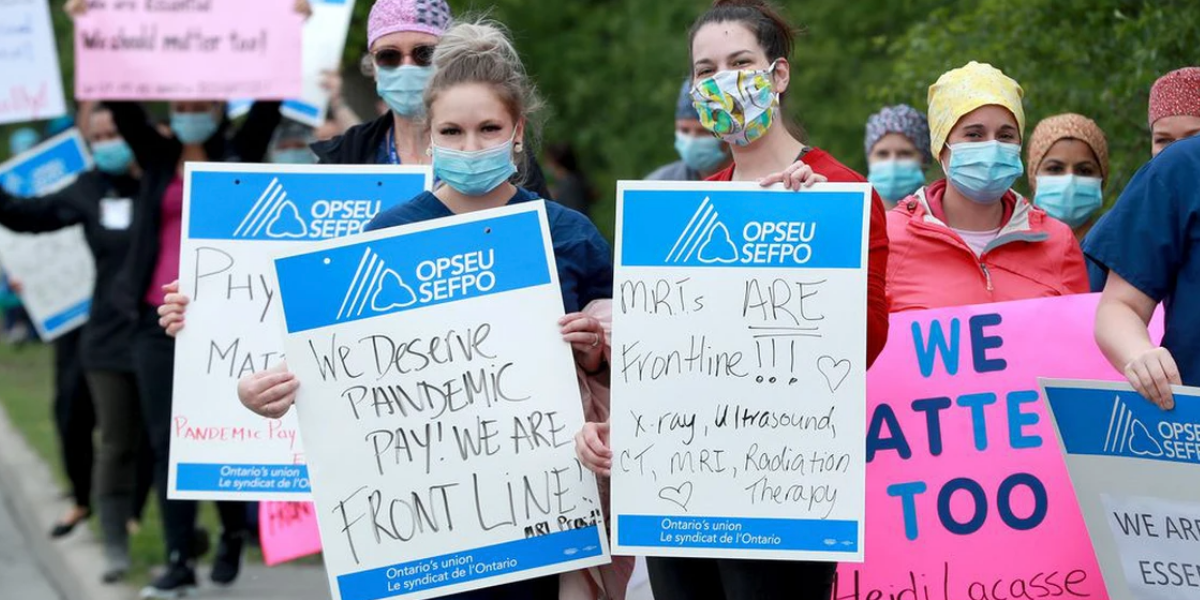 OPSEU President Warren ‘Smokey’ Thomas recently published a commentary on strategy and tactics for social change that seeks to discredit the merits of worker-led organizing and direct action. His commentary pillorizing the slogan of ‘educate, agitate, organize’ misses the mark and badly misreads our current political context.

I want to be clear – as a trade union leader I stand in solidarity with OPSEU members. They have continuously organized for better working conditions, agency, deepening democracy, and members have even taken it upon themselves to found organizations such as the Workers’ Action Movement.

Trade unionists should reject Smokey’s callous dismissal that agitation belongs in the past and what we need now is more advocacy. Agitating is a fundamental part of organizing: you educate to grow working class consciousness, you agitate to understand how unfair and unequal power dynamics between workers and bosses are, and once it is understood that collective power is the solution, you organize. Advocating without agitating does nothing. To advocate for policy change without building a movement is merely a band-aid solution that does not create long-term change or transformation.

And agitation is precisely what we need now to counter the Ford government’s racist, anti-scientific and anti-worker agenda. Knowing that people are dying in large part because the Ford government and employers have put profits over people, trade unionists need to agitate for paid sick days for all, for safe workplaces, safe schools, for equitable distribution of the vaccine and support for renters.

We need to educate and organize to win these needed reforms, but as a labour movement we can’t “advocate” instead of “agitate,”  “consult” instead of “confront,” and expect things will change. It is a profound mistake for leaders to think that making nice with the government and employers is how workers see gains. Our power as a movement comes not from having a seat at the table, but from an activated and engaged membership who seek to educate, agitate and organize in their workplaces and communities.

Smokey’s commentary is out of touch with the times. I was struck by his dismissal of a new generation that is very much pro-union, pro-socialist, and savvy with digital organizing. Moreover, in an era of BIPOC-led historical social movements, “advocators not agitators” remains a tacit form of tone-policing. I also have to ask, why take the time now to critique a slogan that has been the bedrock of the union movement for generations? Why attack a former OPSEU member who wrote an article eight months ago looking at the historical origins of the slogan? OPSEU members, indeed all trade unionists, certainly have more pressing concerns at the moment.

Educating, agitating, and organizing is a timeless approach that allows workers themselves to transform their union into a meaningful association, and public sector workers deserve leadership that will catalyze this possibility from the grassroots. It’s no coincidence that upper layers of leadership may sing praises of Ford and come to harm member interests given that bureaucracy which favours de-radicalization is often built into union constitutions. Members should consider re-shaping this structure too. As a movement, we don’t need leaders talking about their glory days while simultaneously telling us that militancy achieves nothing. We need leaders who understand the time to agitate is now.