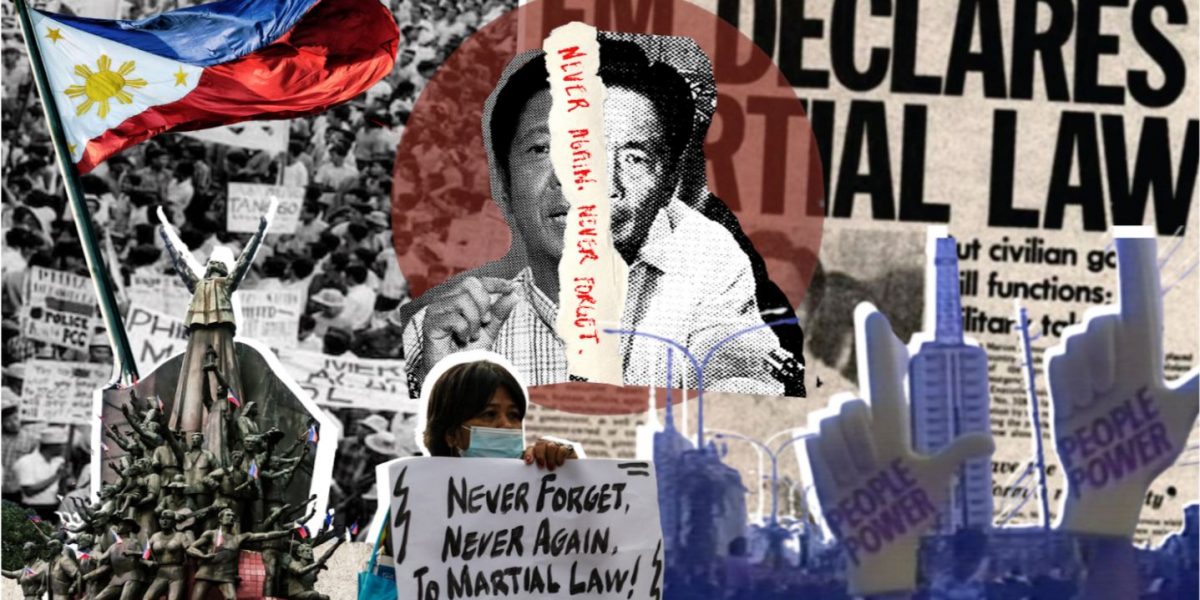 This year marks the 36th Anniversary of the EDSA People Power Revolution, a historical uprising of the masses who ousted the late Ferdinand Marcos’ longstanding dictatorship and restored democracy to the Filipino people. On February 25, 1986, days after Marcos’ controversial win during the 1986 Snap Election, millions of Filipinos–including farmers, labourers, youth activists, journalists, and human rights advocates–gathered in the streets of Epifanio de los Santos Avenue or EDSA, in Metro Manila, to overthrow Marcos’ 20-year oppressive regime.

This monumental event gave the masses hope in regaining their stolen rights and freedom.

Filipinos have fought for years and are still fighting for their freedom after the EDSA Revolution. But four decades later, we are under another threat of a resurgence of tyranny and fascism when the former and current ruling dictators’ children seek the two highest positions in the Philippine government. Ferdinand “Bongbong” Marcos Jr., Ferdinand Marcos’ son, is attempting to restore their family dynasty by running for the presidential race alongside the current president, Rodrigo Duterte’s daughter, Sara Duterte, as his vice-president for the upcoming May 2022 Philippine Elections.

With the current socio-political climate in the Philippines–with cronyism, poverty and injustice–the People Power Revolution in 1986 is far from being fulfilled.

Ferdinand Marcos won the presidential elections in 1965. During his second term in 1970 the economy was on its path to decline, from foreign debts accumulated due to infrastructures built upon the backs of underpaid labourers to the government’s failure to address the rising problems of poverty due to lack of jobs.

According to the 1935 Constitution of the Philippines, Marcos was only allowed to be in the presidential seat until 1972. But before his term ended, he issued Proclamation No. 1081 giving him the power to declare Martial Law that lasted for 14 years. In the 21 years of authority, Marcos took advantage of Filipinos economically, and socially through numerous human rights abuses.

The Marcoses amassed an insurmountable amount of wealth under the guise of social service programs and public infrastructure that benefited their pockets. At the same time, unemployment and poverty reached historic peaks. In response, the Marcos administration developed a systematized policy in the mid-70s that regulated the outflow of labour migration, exporting Filipino workers. Under Marcos, the inflation rate reached 50.3% in 1984, and the Philippines hit its worst recession on record, with our foreign debt reaching $28.3 Billion in 1986.

Aside from the accumulated ill-gotten wealth, in over 21 years of dictatorship at least a hundred thousand Filipinos were victimized by human rights abuses including surveillance, torture and extrajudicial killings. Years of social injustice, extra-judicial killings, repression of freedom, corruption, and government incompetence united the masses to topple the abusive regime. But up until today, the Marcoses have continued to deny and refuse to acknowledge their crimes, and their victims still have not received justice.

Scattering of Filipinos across the world

When commodification of labour migration was institutionalized to alleviate the debt crisis during the Marcos regime, Filipino families were again faced with new challenges. Working and seeking a living abroad came with precarity, discrimination, exploitation, and hardships of living transnationally, where Filipinos abroad are placed in such liminal spaces.

Filipino mass migration was undeniably part of the historical context that is tied to neocolonial conditions when the Marcoses promoted forced migration. Today, Filipinos are considered to be the Philippines’ top export due to the fact that at least 10 million Filipinos are living abroad, which was continued further by other presidents after Marcos.

It is no different under the Duterte regime. Forced migration proceeds are an essential contribution to the Philippines’ economy: last year’s remittances reached  $31.4B (USD), which yet again proves that this is a primary component to maintain the Philippines’ global workforce. Today, another Marcos vying for power means continued reliance on commodified labour and family separation, a phenomenon started by Marcos Sr.’s dictatorship.

Five years after the Marcoses left for exile in Hawaii, the family returned to the Philippines, where they slowly regained their political power using their ill-gotten wealth. The family faced no consequences despite their crimes against the Filipino people. Instead, after their exile, Imelda and her children Imee and Marcos Jr. returned to politics. In 1992, Imelda Marcos ran for president, claiming that “this nation will be great again,”. But there was no such thing as a “golden era” as the Marcoses only brought grievances to the Filipino masses. That same year, their son, Bongbong Marcos, won as congressman for the Second District of Ilocos Norte, the family’s home court.

In the following years, the Marcoses proceeded to infiltrate local and national government positions; at the same time, they used this as an opportunity to rehabilitate their image. The Marcoses took advantage of Filipinos by erasing from Philippine History textbooks discussion of Martial law and their heinous crimes. Over the past few years, the family has propagated deception through traditional and digital media, dismissing accounts of their human rights violations and ill-gotten wealth.

The threat of a Marcos-Duterte tandem

The struggle of the Filipino masses against oppression persists as the emergence of authoritarian figures did not end after Martial law. Filipinos still live in poverty, and families are being torn apart due to the lack of employment opportunities. Farmers do not have ownership of the land they till, and countless human rights violations. Corrupt officials are still in positions of power.

As we anticipate the final months of Duterte’s presidency, it is undeniable that the strongman approach exhibited by his reactionary regime was derived from Ferdinand Marcos’ dictatorship under the guise of strong leadership and discipline. When Duterte took his position of power in 2016, he emulated Marcos’ autocratic leadership style. It has taken in new forms of rampant arrests, institutionalized efforts to silence dissent, heightened militarization in rural communities, red-tagging of activists and civilians and media repression.

The battle for democracy and freedom continues as the Marcos-Duterte tandem runs for the president and vice-president positions in the forthcoming 2022 Philippine Elections. Let’s not forget the atrocities that fell upon the Filipino people during the time of their fathers. If they win, they will continue the reign of political dynasties and restore dictatorship.

It is undeniable that the People Power is celebrated for its achievement of putting an end to a 21-year dictatorship, but what it failed to do long-term was to fulfill its potential where the oppressed class gets rid of the ruling class. When the Marcoses fled, post-People Power remained to be ruled by the elites, and neoliberal policies continued to control the Philippine economy whereas ordinary Filipinos were left to plaster the economic holes from the stolen wealth.

The annual commemoration of the EDSA People Power Revolution of 1986 was just the beginning of the uprising of the masses against fascist and tyrannical regimes. We say never again to being oppressed and never forget our oppressors. May the achievements of the EDSA Revolution serve as a memory where resistance was a driving force for Filipinos to propel history on the peoples’ side.

As Filipinos in the diaspora, we carry the history and the struggle of our people back home. We must use this to remember the atrocities that happened in the past, what was achieved and what was not, and learn the legacy of People Power as we strive to address the roots of our struggles and further achieve the fundamental change by fulfilling the unfinished promises from the revolution.

After suffering from 20 years of tyranny, Filipinos will not allow the dictator’s son to restore their dynasty in the administration. As long as injustices continue to exist, the masses will always rise up to fight against them.