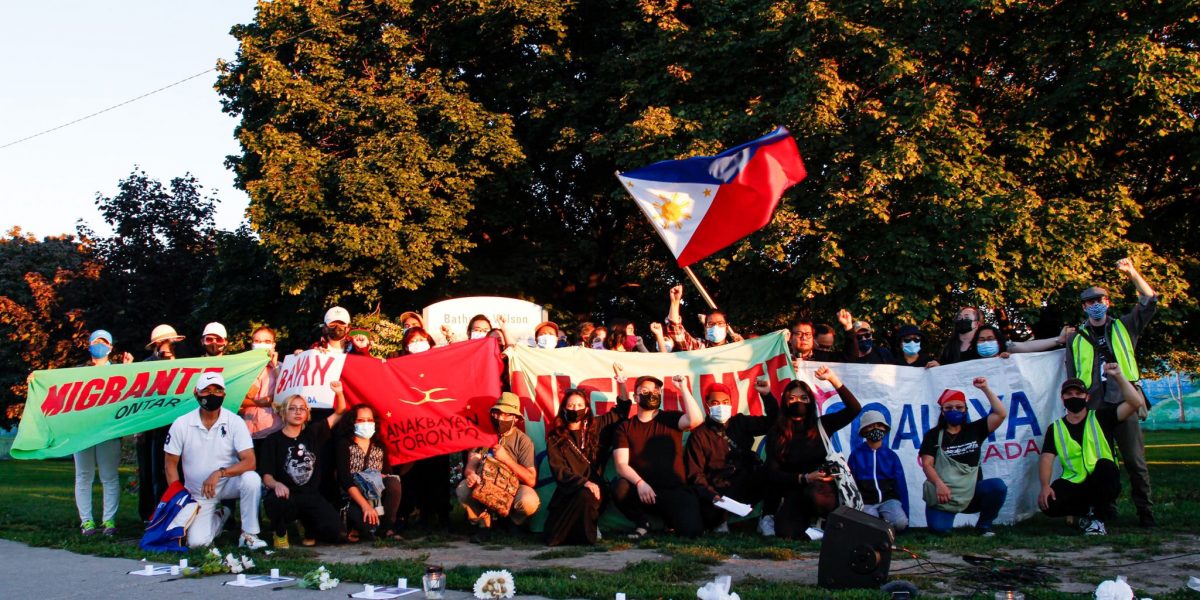 Last week hundreds of Filipino migrants, organizations and solidarity groups across Canada gathered to commemorate the global action to honour the victims of the Marcos and Duterte bloody regimes and continue to demand justice for them and their families. This year marks the 49th year since the dictatorship of Ferdinand Marcos declared martial law via Proclamation No. 1081.

Crimes under the Marcos regime

Most Filipinos are still living with the terror caused by Marcos’ administration. Forty-nine years have passed, yet Filipinos, including those from the diaspora are still seeking justice and paying the rampant debts acquired by the Marcoses.

As Sherilyn Recinto, chairperson of Anakbayan Montreal, notes, “Marcos is a proven criminal, culpable for the murder of over 3,000 civilians, the torture and disappearance of more than 34,000, and the illegal imprisonment of over 70,000 during martial law. Marcos and his family used their despotic power to enrich themselves.”

The Marcos dictatorship was also one of the fundamental reasons why thousands of Filipinos fled and immigrated to the U.S and Canada. His regime looted and wrecked the Philippines economy while cracking down on basic rights.

Forced mass migration became commonplace during the time of martial law due to the institutionalized labour export program, originally intended to be a temporary solution for the declining economic situation during the 1970s. However, labour migration has been steadily increasing up to now due to high unemployment, poor living conditions, alongside the enacted government policy of emigration.

The Philippines’ biggest export remains labour. Workers have little choice but to migrate to the west in search of work, while the Marcoses and their cronies continue to benefit from their corruption.

For 35 years, the Marcoses have managed to postpone their reckoning through constant propaganda and support of the elites. The Marcos dynasty proceeds to retain their political power in the Philippines despite the ill-gotten wealth and a legacy of human rights abuses.

“The Marcoses are trying to erase the historical memories of martial law years. They get themselves to be interviewed by popular celebrities, they hire and mobilize social media trolls to wipe clean their stained reputation,” says Rev. Ariel Siagan of International Coalition of Human Rights in the Philippines (ICHRP). “They want us to forget their crimes.”

Bongbong Marcos, the son of Ferdinand and Imelda, is eyeing a national position in next year’s general elections. The Kilusan Bagong Lipunan party, founded by the late dictator, submitted a nomination for Bongbong for the upcoming presidential bid for 2022 elections. Bongbong has a long record of denying human rights abuses and corruption committed by his father.

The Duterte government has shown a clear neglect for Filipinos at home and abroad. If Marcoses return to power this neglect, corruption and abuse will only worsen.

49 years after martial law, Filipinos are yet again calling for another ouster to end another dictatorship and cronyism but this time under Rodrigo Duterte’s regime.

Duterte’s de-facto martial law was implemented through anti-terrorism law enacted in July 2020. At the height of the pandemic while Filipinos were pushing for medical support the Duterte government rolled out a militarized response and strict lockdowns.

The past five years of Duterte’s regime has exhibited clear parallels with the Marcos dictatorship. Rampant human rights violations, increased militarization, and a growing  socioeconomic gap between the rich and the poor.

“Under President Rodrigo Duterte, there were more than 30,000 individuals killed in his so-called War on Drugs, at least 394 of whom were extrajudicially killed including peasants, National Democratic Front of the Philippines (NDFP) peace consultants, journalists, lawyers, and human rights workers., noted Rosie Lucente from Anakbayan Toronto.

Leny Simbre of Migrante Ontario, an organization of Filipino migrant workers that advocates for the rights and welfare of Filipino migrants, emphasized that Duterte “surpassed Marcos in numbers of those who were killed, tortured, and imprisoned. Poverty worsened, and external debt increased, which was exacerbated by the COVID 19 pandemic. The Duterte regime failed to manage the pandemic, and the number of COVID-19 infections has reached 20,000 per day and is expected to increase even more.”

In Vancouver, outside Joyce-Collingwood station. Chris Sorio, a martial law survivor and now a BAYAN Canada chairperson notes, “we don’t want the younger generation to forget especially now that there is a systematic revision of history.”

The policies enacted during Marcos’ time did not vanish even after the People Revolution that happened after Marcos was ousted. For the last 15 years the Philippines had been mired by repression and corruption. The authoritarian legacy of Marcos has created an opportunity for Duterte to entrench his own political dynasty.

“Almost six years of Duterte is enough! We cannot let another dictator sit in power for far too long, or else our nation and we, the Filipino people, will be condemned to repeat history,” said Zharmaine Ante, Chairperson of Migrante Canada. “We need to arouse, organize and mobilize our kababayan [compatriots] to collectively fight against all forms of abuse and exploitation.”

It is important to Filipinos across the world to commemorate the struggle against martial law and the Marcos dictatorship and to draw lessons for today. International solidarity is needed more than ever. As Ryan Greenlaw of ICHRP argues, “martial law is not only a matter of history for the Philippines. We say “never forget’, but we must also ‘never allow’ the same breed of murderers and criminals to hold power.”

As Filipino people remembering what happened during martial law is part of a much larger scale struggle towards the liberation of the Filipinos. Remembering the victims under the dictatorship of Marcos becomes an act of resistance. It allows us to understand and resist Duterte’s de facto martial law.