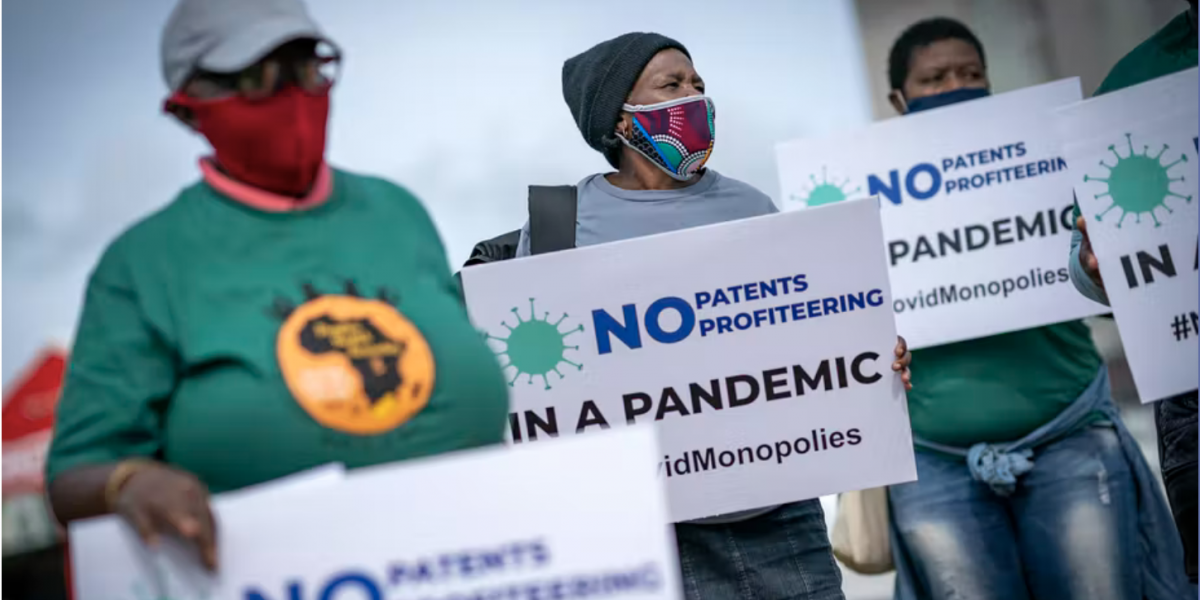 “Being internationalist means paying our own debt with humanity. Whoever cannot fight for others will never be sufficiently able to fight for themselves.” -Fidel Castro

The COVID-19 pandemic opened a new cycle in global politics. Public health care responses across the world have been tainted by the ideological lens of political power and have served to justify the ideologies of our respective political classes. In the west–Quebec and Canada being the focus of this article–the pandemic is the canvas on which the drawn out ideological debates within the 1% are now fought: liberal globalization versus nationalist retraction.

Although liberalism (represented by Justin Trudeau’s Liberals) and nationalism (represented in this article by the Coalition Avenir Québec (CAQ) of François Legault, but also by Ford, Kenney and Scott in the rest of Canada) seem bitterly opposed, the two are in fact both united in their ideological commitment to capitalism. Nationalists believe in the fallacious possibility of a national solution to a global pandemic, and Liberals believe in the fantasy of a market solution to a public health crisis. Together, liberals and nationalists have found their common ground in their ideological impotence. In this past week, daily COVID-19 records were broken consecutively–those “record breaking days” seem like a distant memory, given the scale of the current provincial explosion in cases.

Anxious provincial cabinet ministers have been rushing to find an adequate scapegoat to fend off any valid criticism of the government’s catastrophic handling of the pandemic. In previous attempts to deflect blame, the current Coalition Avenir Québec government scapegoated the unvaccinated, by now a broken record. When that didn’t suffice, focus was put on unvaccinated healthcare professionals. Then their unions became the target of the government’s wrath for criticizing the plans to allow asymptomatic health care professionals to work while sick with Covid-19. The change in script–or scapegoat–is evidence perhaps that none of the excuses presented have really collated with Quebec public opinion, but if there’s anything along the lines of a perfect trifecta of blame it was surely reached when a CAQ minister successfully targeted at the same time: the federal government, lax border policy and asylum seekers.

In the late morning of Monday, December 20, a mere hour or two before the Quebec government had announced a press conference and the media speculative frenzy about what new sanitary measures would be put in place was in full force, Jean Boulet, Member of the National Assembly from Trois-Rivières and CAQ minister of Immigration, francization, and integration, fired out this tweet: “The federal government has the responsibility to act. We must shut Roxham road [border crossing]. We have to be mobilized in the face of the resurgence of Omicron variant Covid cases, to ensure that our healthcare system isn’t overwhelmed”.

Blaming minorities, refugees, migrants for the spread of plagues might seem like the oldest trick in the book, but it’s one that right-wing demagogues here in Canada and across the globe have been using in some shape or form since the onset of this pandemic. Their belief in the symbolic importance of “borders” was reinvigorated tenfold by the unfolding pandemic. Every wave furthering their conviction that “nationalism”, the further entrenchment of our national borders, was the only way to fend off this pandemic. Almost as if the universe had proven their retrograde ideology right. Ignoring the fact that the omicron “deluge” is the logical consequence of borders and vaccine nationalism.

The broadly defined “left” isn’t immune to these knee-jerk jingoistic reactions. From stating support for “national preference” and depicting migrants as Trojan horses of capitalists wanting to depress national wages to the adoption of “Zero Asylum” policy, are some of the most extreme cases of this occurrence. But it is also prevalent in the parliamentary left’s generalized support for varying measures of the Covid sanitary security state–lockdowns, passports, curfews etc.–that harms disproportionately the racialized working class. Legion are the left-wing parties that have through their words and actions supported more nationalism, more borders and broader powers for the state at the detriment of civil liberties. Amidst a ravaging pandemic that acknowledges no obstacles in the form of futile national borders, the belief that reducing immigration to “curb” the latest wave of the pandemic, is ruinous at best, and nihilistic at worst. Adopting a nationalist discourse, when internationalism is the solution, will be the death knell of the left.

If it’s not yet evident, “no man is an island” and in a global pandemic, even islands aren’t immune. Never has the saying “injustice anywhere is a threat to justice everywhere” rang truer when the source of omicron is global vaccinal injustice. Unfortunately, political leadership in this country has forfeited what should’ve been their number one priority: making sure that the entire world had access to the covid vaccine, protecting the world, is the only way to protect Quebeckers and Canadians as well.

Right-wing demagogues admit that they don’t care about the lives of those that don’t have a say in their eventual reelection. But Liberals–the Canadian version in particular–talk about the universal importance of human rights while simultaneously acting as the guard dog for Big Pharma on the international stage. Canadian trade representatives have been fighting tooth and nail at the World Trade Organization (WTO) since the start of 2021 to offset any attempt by governments in the Global South to temporarily lift COVID-19 vaccine patents.

Justin Trudeau will never send out a tweet like Jean Boulet did this week. Trudeau and his cabinet have polished their image as through and through multiculturalists, and multilateralists on the world stage, proud defenders of LGBTQ2SIA+, of women’s, of minority rights. Until those rights—the right to life, in this case, the most paramount of them all—contradicts the actions of their associates at Pfizer, Moderna etc.  Multilateralism and multiculturalism is not internationalism, it’s a veneer for a nationalism that doesn’t call itself such.

Justin Trudeau’s nationalism doesn’t call itself such because of the nationalism of the wealthy, the nationalism of the “international community” never has to. The wealthy and in this case the “West,” isn’t a “nation” in the conventional sense of the term. But act as a nation they do.  In this pandemic never have the “borders” that defend the world of capital been so obvious–the wealth, the walls, the barbed wire, the contractual clauses.

Justin Trudeau and François Legault, Chrystia Freeland and Jean Boulet might play the roles of nemeses. Liberal multilateralism and right-wing autarky might appear to be different scripts. But one plot unites them: defend a system of border imperialism and vaccination apartheid, putting profit before human lives.

The COVID crisis and a world beyond capitalism

To successfully fight Covid we cannot continue to play the roles, enact the scripts of a play on which the curtain has already dropped–neoliberalism, in both its liberal and nationalist variations. Yet, that is the sort of miserable unimaginative plot both right-wing demagogues and liberals offer us. They offer borders for an uncontainable virus, or they lock up life-saving technology under patent laws amidst a public health crisis. For these nationalists, if the only solution is to be found outside of capitalism, then there is no solution.

Neoliberalism, which unites both right-wing demagogues and liberals, has proven to be incapable of handling this pandemic. Both are prisoners of their incapacity to imagine a world beyond capitalism, and as a result have fueled the pandemic: our battered health care systems was suffering from deep cuts before the first case of Covid was even detected, and our public laboratories have been privatized. Our ability to produce PPE, vaccines, and ventilators have been limited, and our public supply chains have been compromised.

Ironically, the tools at our disposal to battle the threat of Covid–and all the other existential threats to humanity–have never been greater. Amazon has shown us that we are capable of creating supply chains that branch across the world. Imagine if we put Amazon’s global supply chain to use to bring vaccines, ventilators, PPE etc. to the struggling nations of the Global South. Pfizer and Moderna (benefiting from public research funds) have proven that we have the biomedical technology to provide care to millions across the globe. Imagine if we put a fraction of the efforts we put into Covid research in addressing the global pandemics of overdoses, HIV, or hunger.

In a contradictory sense, Covid has brought our world together in ways that we might have never imagined before, accelerating underlying dynamics that were already at play but also forging global spaces of sharing, participation, struggle and of solidarity that never existed before. These are the spaces of imagination, that might just have the ability to breathe life anew into the left. To build a world based on international solidarity and cooperation, might just be the ember that will light our fire, an ember from the fire of a resurgent global left.

Covid has shattered many worlds, and it can shatter the neoliberal credo that there is no alternative. But only if we are courageous enough to reject both liberalism and nationalism, and embrace internationalism.

As another “ineffective and harmful” curfew looms in Quebec, countless more lives are upended because of a variant that could have been defeated by the stroke of a pen. We need to take the necessary lessons from the 5th act of this tragedy: omicron is the offspring of nationalism and liberalism, and to defeat Covid we must defeat the ideas that allow it to propagate. It is my deepest hope that from this Covid winter will emerge, radiant, lustrous like spring, a world of sprouting flowers in the wreckage of decaying feigned borders and archaic economic models.