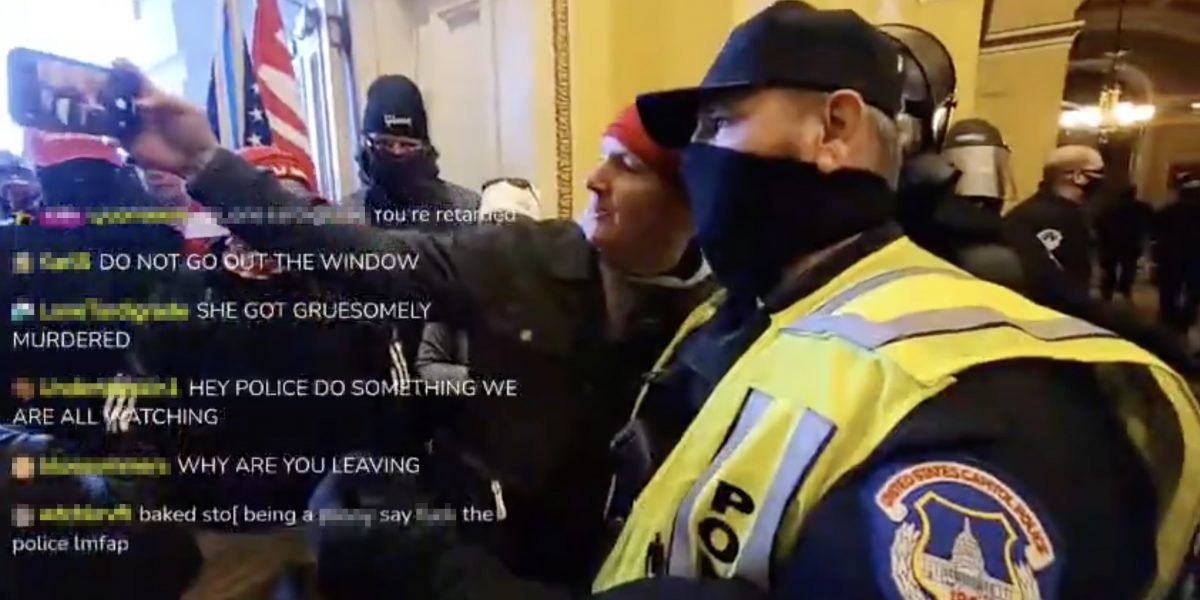 The police-assisted riot at the US Capitol reminds us of hard-learned (and easily forgotten) lessons about the far right. But if we don’t assess the danger correctly, we’ll seek to defend ourselves in all the wrong ways.

Defund and abolish the police

One look at how sympathetic the Capitol police were to the rioters, should take us past the point of obvious: police know how to exercise restraint, but they are trained (consciously and not) to only offer it to the white people they see as full humans. Everybody else is less-than, and police response follows accordingly. This is part of the system that upholds white supremacy and its capitalist foundation — and it’s the only way to explain the kid-gloves treatment of the MAGA rioters. Anybody trying to deny this is asking you to “ignore your lying eyes” and buy a myth of bad apples and reformability.

Of course, there is no love lost between the left and the institutions of US imperial power. But it’s still breathtaking to see that even when it’s time to defend a “sacred ground” of the American political imagination, the cops preferred to bow down to the rioters and let them in. While the police routinely murder unarmed Black people, they posed for selfies with armed white supremacists. While Trump has spent years waxing about “law and order” and characterizing migrants as an existential threat —enough to gleefully expand the cages and camps Obama left him— he stalled the Pentagon from activating the National Guard against a real attack on the government (planned openly on Facebook and Reddit).

The year 2020 saw widespread calls to defund the police, and the permitted attack on the Capitol offered more reasons: police budgets consume billions of dollars to inflict daily violence on Black, Indigenous and racialized people, but when faced with actual violence they are somehow powerless to hold it back. The police need to be defunded and abolished, and their budgets redirected to real community supports.

This wasn’t a coup. There was zero plan beyond that to link up with any part of the courts, the bureaucracy, the military. You don’t take over a government —let alone the most powerful one in the world— by interrupting a symbolic ceremony or occupying a room in an important building. This isn’t a superhero movie and those election certificates aren’t magic crystals. As Keeanga-Yamahtta Taylor tweeted, “It’s a coup in their minds but not in real life. The United States government cannot be sacked by a mob of angry white dudes. If the police or the military wanted to flex and end this right now, they could. They’ve decided to let them blow off steam.” Whether the MAGA dudes understood this going in or they’re as deluded as a lot of media coverage, doesn’t matter.

Fascism is a real threat, but it won’t be stopped by more state power

This is, however, serious. But it’s serious in a way that liberals in power won’t talk about. This is another sign of a potential fascist movement. Decentralized, bumbling, and small in numbers for now. But bound to erupt as economic conditions worsen for everyday people — thanks to the billionaire class that owns both parties. Without other answers to explain the misery, racist division becomes an easy tool for organizing the desperate. Liberal politicians might talk a big game about the racism, but they’ll do nothing to address the underlying economic chaos or help create solidarity between people. Because any real multi-racial solidarity would hurt profits, and it’s “reasonable” to want to preserve profits. It’s “unreasonable” to give people the healthcare they’re going bankrupt without, or the rent freeze that will save them from eviction, or the Green New Deal that would give them the decent jobs they need. Elites won’t even defund the budget-draining and largely useless police.

Instead, the one thing liberals will do, is line up behind expanded state powers of surveillance, and more money for law enforcement. (Conservatives, famous in song for their love of “small government”, won’t argue against a mass police force and new laws. They make good dance partners that way.) They’ll say it’s to protect us from the next “coup attempt”, and be more than happy to throw the “terrorist” label around to have you worry deeply about preventing any attacks. If you remember the aftermath of  9/11, the label of “Islamic extremism” was used to terrorize the Muslim community, often in ways that ranged from impossibly sketchy to corruptly inhumane.

Conservatives are already switching from supporting the Trump-led attack on the Capitol to blaming it on Antifa “terrorists”. If that doesn’t stick, the public will be made to fear the new boogeymen of QAnon and “5G guys” — even as the new laws get deployed against the left, unions, Black or Indigenous liberation groups, climate activists, or any working class people’s movement that looks to be succeeding. (In a development very reminiscent of pre-9/11 warnings, it’s emerging that gathered intelligence did give the FBI advance knowledge of the MAGA riot — but overall the agency didn’t prepare to act. They sure do manage to interfere with pipeline blockades, though.) So the police aren’t exactly useless. It’s that their purpose is to keep things in line for the rulers. Ideally just enough fascists in the streets to keep people scared and divided. Beware the overblown rhetoric of “threats”, by people who have no desire to actually solve problems. This crisis will be squeezed to become productive for all sides trying to gain leverage in the post-Trump era.

Mobilize against fascism and organize for socialism.

There’s lots to cause despair here, no doubt. But these problems can be faced with the same approach. Support groups mobilizing for Black liberation and the call to defund and abolish the police. Link up with an anti-fascist group in your community. The lessons from fascism a century ago is that it has to be fought with mass multi-racial movements — both to neutralize fascists in the streets, and to build movements fighting for an alternative to capitalist crisis. So join movements for decent work, social housing and climate justice. Organize in your workplace to help create local people power separate from party politics. And join a socialist organization around you.

Anyone on social media yelling “coup” but doing none of these things, is not worth listening to. They’d rather play the anxious spectator and have the politicians do the work for them, however monstrously. They’ll be the first ones to support the next Patriot Act or crime bill. In the name of stopping the boogeymen, of course. But we know that politicians won’t save us; they’ll just use individual events to pump up mass fear. They’ll decry the racist rioters (useful idiots in the culture war) but maintain the racist police and surveillance apparatus (necessary tools in the capitalist system), rather than do anything about our worsening lives. The power to create a different world, as ever, must be built from below.