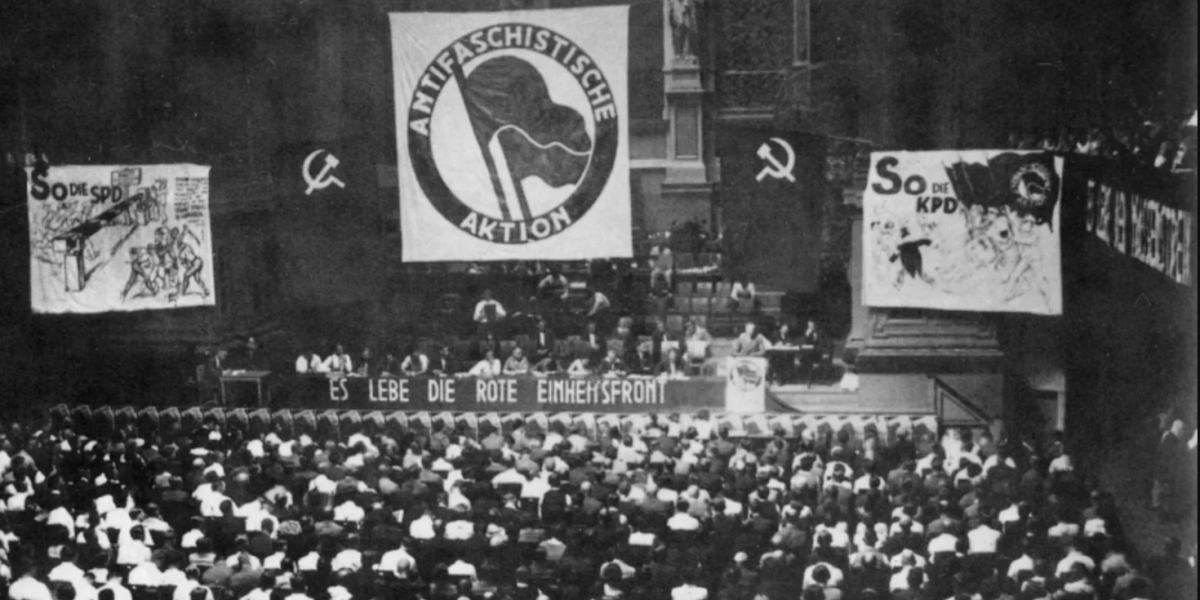 We live in a time of crises. The a global pandemic intersecting with a climate and economic crises. For ordinary people, housing has become less affordable, wages are increasingly inadequate to the cost of living, and employment has become increasingly precarious. With this deepening economic insecurity there is growing discontent, which is producing a polarization to the left and to the right.

On the one hand there has been inspiring electoral efforts of people like Bernie Sanders, Ilhan Omar and Alexandria Ocasio-Cortez, showing a renewed interest in socialism among wide layers of people. But on the other hand, far-right groups and organizations are becoming louder. They make ludicrous appeals to free speech rights to justify marching openly with swastikas and spewing white pride rhetoric—believing immigration, leftism, sexual freedom and multiculturalism are together producing an ‘incremental genocide’ of the ‘white race’.

In some regions far-right groups have been given a boost by mainstream rightwing parties—from Conservative Doug Ford who posed for photos with fascist mayoral candidate Faith Goldy, to Republican Donald Trump who who has openly justified far-right violence. Elsewhere more explicitly neo-Nazi groups have established an even stronger presence in the streets and in parliament—from the Jobbik party in Hungary, the National Front in France, and Golden Dawn in Greece, to Bolsonaro who now presides over Brazil.

Capitalism doesn’t work for the very people who produce the wealth in it, for this class of producers will always be in direct conflict with those who are in control of production. The owners of capital, the ruling class of this system, have as main objective to maximize profits—even at the expense of impoverishing workers and destroying the environment. Workers, on the other hand, want higher wages, job security, better healthcare, a slower paced and safer work environment, and more democratic control of the workplace – the basic goal of socialism.

Due to these conflicting class interests, unavoidable under even the most liberal or social democratic capitalism, workers will always need to struggle just to keep what they have. From the perspective of the ruling class, controlling workers becomes ever more necessary in a time of economic crisis. In such times, socialist ideas naturally become more appealing. Capitalists want to channel the discontent in a different direction.

Capitalism, being an unplanned, chaotic economic system, will go through cycles of boom and bust. In boom times, capitalism grows by finding new markets, new places to extract resources, to exploit labour and produce more goods. In times of crisis, capitalist economies struggle to deal with problems of effective demand (a product of increasing unemployment and under-employment) and investment.

In the 20th century, Germany and Italy faced economic crises, largely as a result of the First World War – a war among the major capitalist powers in which about 40 million lost their lives. Many people considered the devastation of the war, and its aftermath, to be a failure of the capitalist system. Both countries, with rising unemployment, saw a tremendous growth of worker militancy and expanding socialist movements. In Italy there were strikes, land occupations and even factory takeovers. The 1917 Bolshevik revolution, as well as the Russian withdrawal from the war, served as inspiration to millions of workers. In Germany, the revolution was crushed, but the Great Depression of the 1930s further exacerbated the crisis and there was again a rising socialist appeal.

When the voices of workers and their movements became louder, the ruling classes sought to regain control. From their point of view, the socialist ‘threat’ had to be forcefully and decisively crushed.

Liberalism was insufficient to soften workers’ outrage. They knew the game was rigged against them, for the liberals and social democrats, particularly in Germany, joined the more conservative parties in sending them off to war to kill fellow workers in the first World War. This war was fought for the sake of imperialist rivalries and to redirect the class consciousness of workers into a belligerent nationalist consciousness. The ruling classes needed to support a counter-movement to stop the rising threat of socialism, even if it meant resorting to extreme measures. For at the end of the day, the ruling class wanted to retain power.

A key social class in these two countries during this period was the petty bourgeoisie – artisans, small shop owners, and what Lenin called the ‘middle peasants’. Trotsky stressed that this class was the key to victory for the ruling class over the militant majority of workers, that the petty bourgeois class would be the ‘battering ram’ used to shut down the workers’ movement. This was possible because these ‘middle classes’ felt they had nowhere to go: on the one hand in danger of ruin by capitalist crisis, and on the other seeing no hope in socialism. They were not big capitalists, but nor were their class interests perfectly aligned with propertyless workers.

A revolutionary moment existed in Italy and Germany, but ultimately the parties that could have taken a leading role failed to form an effective united front against fascism. In Germany, the German Social Democrats (SPD) tended to regard fascism as a mere ‘post-war psychosis’ that would fade without the need for militant socialist opposition, while the Communists under the influence of Stalinism resorted to calling the Social Democrats ‘social fascists’ rather than joining together against the common threat. In the case of Italy, while Mussolini and his National Fascist Party (PNF) was gaining popularity and capitalist support, the parties of the left were busy splintering and also failing to form a united front. As Trotsky put it: “There are no exceptions to this rule — fascism comes only when the working class shows complete incapacity to take into its own hands the fate of society.”

During the rise of fascism in Europe, the popular base of fascist parties became organized and mobilized. Armed fascists bands sprung up with the goal of intimidating and terrorizing marginalized communities and the left (though many splits did occur, partly due to disagreement on whom to hate). Blackshirt groups belonging to far-right, fascist and Nazi parties and groups attacked worker militancy and leftist organizing at all levels. In France and England, the ruling class flirted but never fully backed organized fascist organizations, nonetheless in these countries fascists remained a serious threat — that required an organized and united response.

There are many responses to fascism. Some give in to their claims to “free speech” on the grounds that reasonable arguments will win the day. But free speech for fascists is used to take away the speech, liberties, and lives of others—so they must be denied any platform for spewing their hatred.

Parliamentary parties falsely believe that mild reforms are adequate, that merely appealing to logic and moral sentiments will stem the rising tide of fascism. Like the social democrats in Germany and Italy, they seem to  have faith that ruling elites will be sufficiently ‘enlightened’ to do what is right and just.

Others response is to put faith in “law and order.” But historically the state was not a barrier to fascism, it became incorporated into fascism. And relying on the state to police the far right provides an opening for them to police the far left—which capitalism seems as the greater threat. For example, when the far-right marched in Hamilton, the police intervened to arrest an anti-fascist organizer.

Another response is to hope that a small group of left wing radicals can simply fight off right wing radicals. But this cuts anti-fascism off from the majority who should be mobilized—and reduces anti-fascism to a street brawl. The Stalinized Communist parties of the 1930s devoted their energies to equating social democrats with fascists instead of building a militant, working-class united front—thus playing into the hands of Hitler and Mussolini, who walked right into power. Such serious miscalculations must be acknowledged, understood, and avoided.

“these tasks run along two lines. One group of tasks aims at overcoming fascism ideologically and politically…We must remain aware that, as I said at the outset, fascism is a movement of the hungry, the suffering, the disappointed, and those without a future. We must make efforts to address the social layers that are now lapsing into fascism and either incorporate them in our struggles or at least neutralize them in the struggle. We must employ clarity and force to prevent them from providing troops for the bourgeois counterrevolution. To the extent that we do not win such layers for our party and our ideals and are unable to incorporate them into the rank and file of the struggling revolutionary proletarian battle forces, we must succeed in neutralizing them, sterilizing them, or whatever word you want to use. They must no longer threaten us as warriors for the bourgeoisie… We must not combat fascism in the way of the reformists in Italy, who beseeched them to ‘leave me alone, and then I’ll leave you alone.’ On the contrary! Meet violence with violence. But not violence in the form of individual terror—that will surely fail. But rather violence as the power of the revolutionary organized proletarian class struggle.”

This was ignored in Germany in the 1930s, with tragic consequences, but has been applied successfully to undermine fascist groups from Britain to Greece, and can be replicated wherever fascists rear their ugly heads.