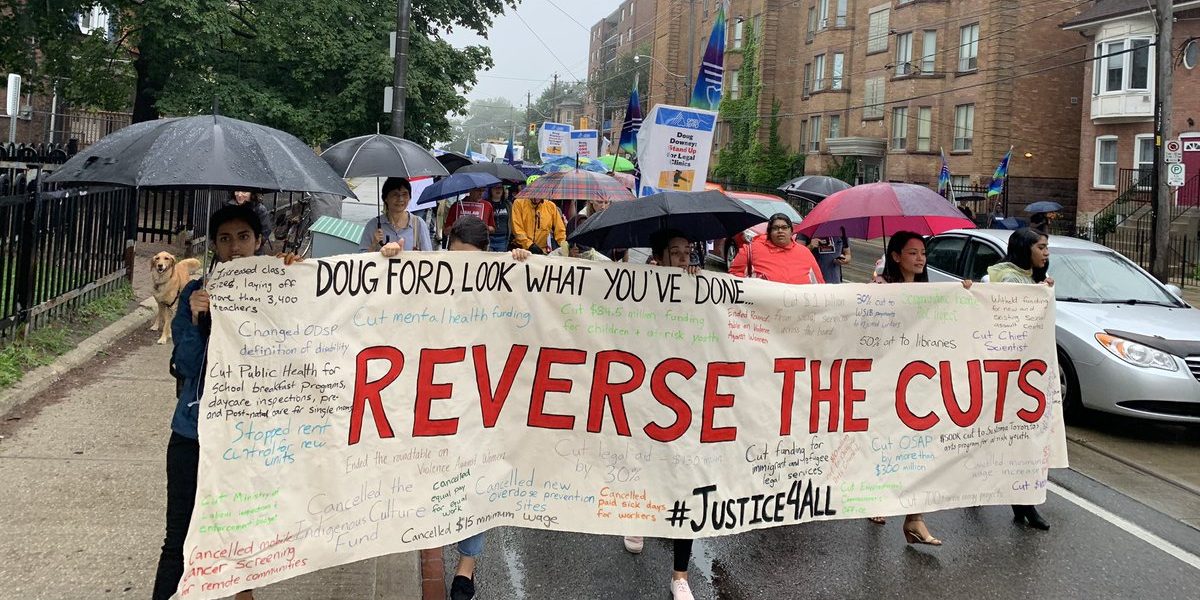 My name is Paul Codd and I’m an ex-hoarder. I don’t know what caused me to hoard, although experts in the field state that a psychological component may be possible. But I can tell you what stopped my habit.

I received a work order from my landlord. It stated that they wanted to inspect my apartment. Sometime later, I was sent an eviction order telling me that I would have to vacate my apartment as of such and such a date. I was suicidal. No exaggeration. What could I do?

That’s when I began getting in touch with community legal clinics, and that was life-changing. I connected with the Advocacy Centre for Tenants Ontario (ACTO) – a specialty legal clinic that focuses on affordable housing and tenants’ rights. I also connected with Flemingdon Community Legal Services – a local community legal clinic that works with low-income people in the Flemingdon area who are struggling with all sorts of legal problems that poor and working-class people are faced with.

The help I got from the legal clinics, and most directly Bhavin, a lawyer at Flemingdon, has been a high point in my life. Bhavin set me up with VHA Hoarding Support Program, which is an extreme cleaning service used by people who hoard. They came to my apartment and washed, cleaned, and threw out whatever needed to be thrown out. They were also extremely pleasant, asking me to please tell them what I wanted to keep instead of being thrown out. The people from VHA were a godsend.

Bhavin also represented me at my hearing with the Landlord Tenant Board (LTB). He discussed the issues with my landlord’s lawyer, and the case was resolved. An agreement was made allowing the landlord the right to inspect my apartment after VHA had performed their magic. The landlord inspected my apartment as agreed upon. Everyone was happy with the results.

Well, that was the solution to one problem. And it was resolved because of help from the legal clinics.

Beyond helping people with individual issues like mine, the legal clinics are also involved in important systemic work around many issues, including workers’ rights. The clinics do important work to support the work of organizations like the Workers’ Action Centre, which defends workers against reprisals from employers. The Workers’ Action Centre is also a leader in the Fight for $15 & Fairness Campaign, and we have seen many legal clinics take action to support that campaign to bring fair working conditions for all. Whether they are making submissions to the legislature, making deputations in front of committees, or organizing their communities to be out on the street in public actions, the legal clinics are on the frontlines of the fight for decent work and workers’ rights.

An important part of the fight for workers’ rights is the struggle for justice for injured workers. Clinics like the Injured Workers Community Legal Clinic, IAVGO, and the Workers’ Health & Safety Legal Clinic do tireless work to help workers who have been injured on the job and are being treated unfairly by the Workplace Safety and Insurance Board (WSIB). In particular right now, they are fighting to ban the practice of “deeming.” Deeming is a method used by the WSIB to defraud injured workers of monies owed to them. The WSIB deems that an injured worker can do a job that they can’t actually do. Doing this affords the WSIB the opportunity to give the worker less compensation than they should be getting. The practice is immoral. It should also be illegal. I am proud to be associated with these struggles.

Another major systemic issue that legal clinics are active around is housing. I am a member of the Right to Housing Coalition (R2H), which is connected to the ACTO legal clinic. We are a coalition dedicated to Canada having a national housing strategy. This would hopefully eradicate Canada’s homelessness problem. It would also give some people a modicum of hope when it comes to the future. On June 21, 2019, after pressure from housing activists the House of Commons passed Bill C-97, which gives Canada a national housing strategy. Although only a promise from the Liberals, this is a step forward.

This major success would not have happened were it not for the leadership and organizing of the legal clinics. In my own life, I have seen them have a direct impact for me individually, and also in a systemic way that will benefit thousands upon thousands of people.

Everything I’ve written about relates to the legal aid system in Ontario. It provides life-saving services, and eroding it would be catastrophic. It would be the greatest attack on the poor since 1995, when Mike Harris reduced social assistance rates by 22.5%.

But now, Doug Ford wants to reduce legal aid funding by 30% this year, and 10% more next year. The legal clinics are being decimated. Ford has already cut the funding to Parkdale Community Legal Services by almost 50%. Legal clinics that have taken part in activism have been hit the hardest. Heaven forbid if the poor and downtrodden were helped out of their situation. The powers that be want no part of it. The premier’s handiwork will see all funding to legal aid cancelled when it comes to immigrants and refugees. If my parents came to Ontario now, rather than in the 1950s, our chances of survival would be bleak.

The legal clinics have been at the forefront of struggles for people’s rights. They have fought to raise the standard of living for the poor and working class. Now, it’s up to us to fight for them. Fighting for the legal aid system will improve their lot as well as our own. Hopefully the end result won’t be that “justice delayed is justice denied.”