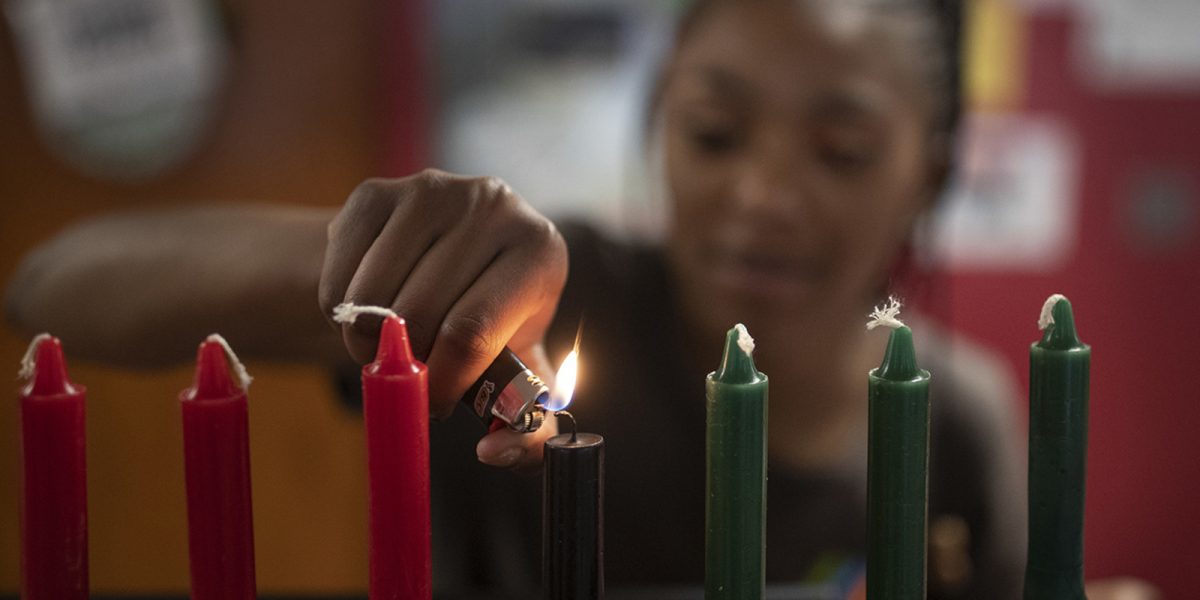 Kwanzaa was created during the Black Power movement of the 1960’s. The holiday rapidly increased to become mainstream, and is now observed by millions of Black folks around the world between December 26 and January 1.

People of African descent interested in honoring our heritage have embraced Kwanzaa. I believe it caught on with millions because it highlighted a deep truth that the myth of white Santa was too ludicrous to continue to entertain in our communities. In its modern day form it is not actually meant to replace Christmas, although it is intentionally meant to be African-centered.

But Kwanzaa is more than an annual cultural celebration. It can be part of helping the working class to self-identify, to recognize our true comrades, and understand that capitalism pits us against each other to further disempower us. A genuinely democratic, harmonious and equitable existence for Indigenous people and people of African descent equals a more peaceful and equitable society for all people. Putting principles of Kwanzaa and socialism into practice can help uplift us all.

The roots of Kwanzaa

People of African descent recognized that we are afforded very little if any opportunities for pride in our own cultural heritage. Particularly due to the negative light that any history of Africa was presented in North American schools, literature, and the media. (Black History Month would not be established until years later.) Kwanzaa was initiated in 1966 in the context of the Black Power movement. Emerging the same year as the slogan “Black Power”, it reflected the movement’s drive for self-determination and cultural expression.

Maulana (Ron) Karenga was head of a group called the ‘Us Organization’ (“us” referring to Black people, as opposed to “them” the oppressors). He felt that people of African descent should have our own version of a holiday and should not have to perpetually participate in traditions that uplift the dominant white society but ignore and erase African/Black culture. As he explained, the goal was to “give Blacks an alternative to the existing holiday and give Blacks an opportunity to celebrate themselves and their history, rather than simply imitate the practice of the dominant society.” Later as a university professor, Dr. Karenga re-stated that Kwanzaa is a cultural celebration, but not a replacement for Christmas—so as to not alienate the millions of Black American Christians who celebrate Christmas. Both Christmas and Kwanzaa are currently celebrated by many.

Kwanzaa reflected the pan-Africanism of the movement, including its terminology and its principles. “Kwanzaa” is a Swahili word meaning “first fruits”, as many African countries did have a history of seasonal first fruits celebrations in timing with harvesting of crops. Indigenous populations across the world have certainly celebrated this. What’s intriguing is that Kwanzaa is not only an agricultural and cultural event; practicing it authentically also requires self-reflection in the establishment of character towards building an equitable society.

During the seven days of Kwanzaa, each celebrant is meant to do serious reflection on important ways of existing, both personally and collectively. Practicing each of the seven guiding principles of what it means to be human, African, and part of a community is at its core. For each night of Kwanzaa we light a green, black, or red candle to observe one of the ‘Seven Guiding Principles’ that respect our African heritage. Each candle stands for one of the following guiding principles:

These are highly useful and commendable guiding principles for anyone to adopt. But still there are many Black people across North America and the world who do not regularly light Kwanzaa candles nor do they take these principles to heart. But ideally these should be introduced to our children, and all children, and should be implemented within our families and community institutions daily.

It’s clear that Kwanzaa’s creation was firmly rooted in the Black Power movement, and born out of America’s Civil Rights struggle, but there’s a crucial connection to all other struggles like women’s liberation, and workers’ rights globally. Similarly, the communal principles that resonated with Karl Marx have also resonated with millions of people across the world.

Communism has existed and been practiced both in African lands and in Indigenous communities long before capitalism. Socialism is the knowledge of the Elders that kept human beings and the earth in harmony. Both socialism and Kwanzaa mean communities sharing and enjoying first fruits of our labour in a sustainable caring societal system.

The main reasons for Kwanzaa remaining the ‘underdog’ would be the deliberate over-promotion of the colonialist European Christmas traditions of the ruling classes in America and around the world. This hyped promotion is part and parcel of capitalism, which is captained by colonizers, white supremacy, and fueled by racism. Capitalism divides, it does not support unity, self-determination, or cooperative economics. Similarly, the ruling class has treated Marxism, communism and socialism as evil. They did this purposefully to enrich themselves on the labour of the masses. They’ve twisted the facts and trained the working class to look in the wrong direction for enemies. Socialism has never been the evil to look out for, but for generations we were indoctrinated to believe the lie.

The socialist principles of Karl Marx and the principles of Kwanzaa have a similar resonance, a kind of parallel vision for racial, social, and economic justice. Marx’s famous 11th thesis on Feuerbach stated, ‘The philosophers have only interpreted the world, in various ways; but the point is to change it.’ Marx would not have been too arrogant, or too timid, to agree that Kwanzaa’s communal principles were akin to his own vision for improving the world.  Let’s just call it ‘mutual admiration’ on two very parallel theories for transforming society and for creating a cooperative, worker-led, balanced, and truly caring and sharing economy.

Many chefs out there are familiar with the phrase: ‘The secret is in the sauce.” Well, the connection between Kwanzaa and socialism is to daily cook up together these powerful seeds of change. Plus, we should let all cultures in on the recipe. Black power has never meant Black supremacy; we’ve always been fighting for equity and equal rights. The revolution we’re working for is one that unites us all. The best kept secret is that achieving Black liberation in solidarity with Indigenous sovereignty is the key to liberation for everyone! Unity (Umoja) means solidarity with ALL people. Get ready to uplift all peoples in equality and equity by practicing the principles.

From symbolism to action

It’s absolutely necessary that a wider range of people realize how many of us are similarly controlled and oppressed in the labor system under capitalism. This pandemic has been lengthened significantly due to oppression that includes less and less funding for community support, poverty wages, no paid sick days, and the erosion of human rights. The working class knows the root cause of our suffering is the colonial and capitalist elite’s refusal to acknowledge our human rights and our workers’ rights. Everyone knows the rich are getting richer, and everyone else is caught in a downward spiral. Most of us have been updated on the plantation-like conditions that farm and food workers are still forced to live under; and the indentured servant type of conditions endured by essential care workers today. Ultra-wealthy owners of conglomerates inhumanely treat workers as disposable; managers and supervisors are still mandated to act like slave-holders. But society is trained not to see this inhumane inequity. This is why we need to denounce the violence of state policies, and to adopt the communal practices of socialism.

Guiding principles are meant to be acted upon. Imagine if building on these connected guiding principles could lead to creating a new, united working-class consciousness that recognizes there’s power in our unity. Imagine if promoting the values and practices of Kwanzaa could strengthen the working-class to rise up against capitalism. In fact it can! A movement of people practicing these communal socialist principles together can help the working-class build on its multi-racial unity (Umoji). This is crucial to gathering our power to fight together against sexism, racism and capitalism.

How can we spread this crucial knowledge? We could start by wishing everyone around the world a resounding ‘Happy Kwanzaa!’ But then we must not stop there! Otherwise, it will only be a cultural distraction from our goal of building power against the global scourge of capitalist oppression. We have, for much too long, allowed myriad distractions to delay much needed revolution. Symbolism detracts from effective action. Black power cannot be found in symbolizing Black culture alone. Let’s get more people united on the same track (Umoja) and start working (Ujima) towards the self-determination of humanity (Kujichagulia). If we do not act on them together then socialist theories and Kwanzaa principles will remain hollow symbolism, indeed.

The Black Power movement of the 60’s and the Black Lives Matter movement of today are supported and strengthened by the socialist goals for a fair and just society. Socialists, including members of Spring, already understand that uniting the working-class will give us the strength we need to succeed in the struggle for revolution.

We also understand that successful unification cannot really happen without actively opposing racism within our own working-class ranks. Sexism, racism and other forms of oppression exist in every society, and it is crucial for socialists to unite globally to dismantle these divisions. Black Socialist Claudia Jones explained that her “triply-oppressed status is a barometer of the status of all women, and the fight for the full economic, political and social equality of the Black woman is in the vital self-interest of white workers, in the vital interest of the fight to realize equality for all women.”

Connecting the Black Lives Matter movement to the struggle of all oppressed workers everywhere is of great importance to the socialist revolution. Although revolution is the means, the fair transformation into a unified society is the goal. A broad and unified working-class movement that can achieve international solidarity will have the ability to transform society, as envisioned by people of the world thirsting for social, racial, climate, and economic justice.

Globally there is an urgent need to effectively abolish imperialist oppression; stop super-wealthy elites from treating human beings as disposable; and stop the governments’ extractive capitalism from destroying the world’s resources, and violating Indigenous lands. This entire planet needs socialist and humane principles and a return to Indigenous knowledge to regain environmental and climate justice. As The Red Nation explained, “Indigenous and Black liberation are the spear for socialist revolution in Turtle Island and the forging of internationalist solidarity with global revolution. Indigenous and Black left feminism is the tip of that spear.”

Since we all know what’s needed, let’s act on these guiding principles as the true path to regain all that’s being destroyed in the name of capitalism.  As my new LinkedIn pal, Africana scholar and educator Professor Jared Ball stated in his recent podcast: ‘Kwanzaa is not more important than socialism — but there is a parallel between socialism and the principles of Kwanzaa.” Agreed. We need to believe in the positive collective power of the people to change the world for the better, and we need to act on it now.