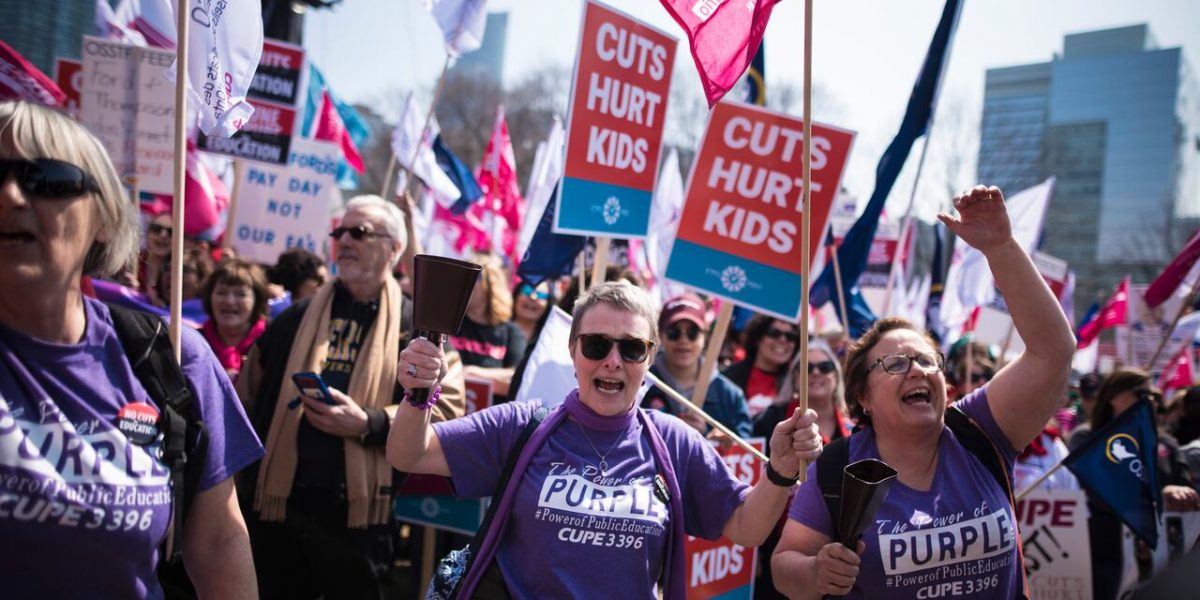 On October 3, CUPE’s Ontario School Board Council of Unions (OSBCU) announced the results of its record-breaking strike mandate vote: over 45,000 out of 55,000 frontline education workers voted 96.5% in favour of strike action, if bargaining with the province fails.

“To the unions, the teachers’ unions: please don’t go on strike. Don’t force my hand. I’m a strong believer in negotiating, but do not, do not go on strike.”

Ford’s comments are telling: he conflates teachers and education workers as if he doesn’t know the difference or the issues that affect each group. It could also be deliberate: to obscure what education workers are fighting for and to undermine public support for them.

Either way, the effect is the same: Ford is trying to make education workers–and their struggle–disappear.

Labour leaders were right to condemn Ford’s response and drew attention to its sexist overtones (the vast majority of education workers are women).

Ford’s threat is outrageous, but not surprising. In his first term, Ford rolled back decent work laws, cancelling the $15 minimum wage and freezing it for two years. He also repealed Ontario’s two paid sick days and still refuses to restore them, even in the midst of a pandemic.

In 2019, Ford’s government introduced Bill 124, wage restraint legislation that capped compensation and benefits for all public sector workers (except for police and firefighters, occupations dominated by men). As inflation spiked, the bill has amounted to a wage cut for most of these workers. It has also deepened a staffing crisis in the healthcare system, where shortages of nurses and other health workers number in the tens of thousands.

There is no debate that Ford is deeply anti-union, despite his “working for workers” rhetoric. His record tells it all. Likewise, there is no debate about how far he’ll go. He has already used legislation to end other public sector strikes, and will do the same for education workers.

We should assume that back-to-work legislation is already drafted and ready to drop at a moment’s notice. The real question is whether the labour movement will be able to stop it.

For that to happen, and for education workers to win, trade union and decent work activists need to focus on building solidarity among rank-and-file workers: in union and non-union workplaces alike, in every sector of the workforce, and in every part of the province. In other words, we need a united working-class movement from below.

It is not enough to put demands on union leaders and wait for them to act. We need a strong, confident, and mobilized base to push reluctant or conservatized leaders to show their solidarity with education workers and, when Ford introduces back-to-work legislation, to mobilize to defeat it.

But it’s just as important to build a rank-and-file base to support and defend left-wing labour leaders, such as the OSBCU leadership, who are prepared to strike and stand up to Ford’s threats.

Without a strong base behind them, progressive leaders can be isolated quickly by a passive membership in their own unions or by conservative leaders in others. They also need support to resist pressure to water down their demands or abandon them altogether.

The OSBCU’s inspiring strike vote is the result of the leadership’s orientation to the rank-and-file: hundreds of organizers and activists engaged in countless one-on-one conversations with members over many months and involved them in the broader mobilization. Those conversations have included frank discussions about the possibility of back-to-work legislation and what the union might do defend their right to strike.

We need to replicate this approach outside the OSBCU, especially in the teachers’ unions (where the leadership appears to have adopted a “lay-low” strategy for bargaining with the province). Education workers are fighting for much more than decent jobs and a better education system. Their fight is quickly becoming the most important labour struggle in Ontario: one that could determine the future of free collective bargaining in the province.

We don’t yet know what it might look like to defy legislation, but there’s a lot we can do now to prepare for that moment.

First, we need to build as much support for education workers as possible outside the OSBCU: among students, parents, teachers, workers in other sectors, and the wider public. We want education workers to know that, if they have to strike, we’ve got their backs.

Similarly, we need to erode the confidence of Ford, Lecce, and their caucus to take action against education workers. We need to show them the groundswell of support for education workers and put Ford’s government on the back foot.

Activists are already doing this in communities across Ontario, as part of the “Paint the province purple” solidarity initiative by Justice for Workers: putting up “Support Education Workers” posters in their neighbourhoods and around local schools and posting solidarity selfies on social media. A province-wide action is now in the works for October 21 (stay tuned for updates).

Second, we need to sound the alarm that Ford is threatening back-to-work legislation and begin discussions about what we might do to defy it. We can’t be caught off guard when Ford makes his move, but should prepare now to anticipate parents’ and other workers’ questions about an “illegal” strike. Likewise, we need to frame any legislation against education workers as an attack on the labour rights of all Ontario workers.

Third, we need to prepare now for emergency actions all across Ontario on the day Ford introduces back-to-work legislation or to strip education workers of their right to strike. For example, in the Greater Toronto Area, an emergency rally could take place at Queen’s Park starting at 5:00 p.m. on the day legislation is introduced. Everywhere else, rallies could take place at PC MPPs’ constituency offices or, in non-PC ridings, at provincial government offices.

But we would need to issue a call-out soon and start making plans at the local level. At the provincial level, we need a strong, united response from union leaders that goes beyond a condemnation or a commitment to fight back-to-work legislation in the courts. The work we do now must demonstrate to labour leadership the appetite (and the potential) among their own members to support education workers and resist Ford’s threats.

One way to achieve these goals all at once would be to circulate a solidarity pledge among rank-and-file union members that allows them to show their support for education workers, while calling on their own leaders to do the same. Download a sample pledge here.

Circulating this pledge would create opportunities for crucial one-on-one conversations about education workers’ demands, the threat of back-to-work legislation, and what workers could do collectively to defeat it. It would also allow activists to begin organizing rank-and-file members to push their leadership to act, or to build support for leaders already on side.

These are just a few examples of what activists could do in the coming days and weeks to support education workers. Anyone in Ontario can put up posters and give out leaflets at a local school. You don’t have to be a member of a union or a group. If you are, even better: bring people with you. However you show your solidarity, share it online for others to see. But start organizing now.

Whatever we do, or fail to do, to support education workers will affect the outcome of their struggle–and every other struggle that follows. As trade unionists and decent work activists, we have a responsibility to back those workers prepared to fight and help them win. And if they win, workers everywhere will be more confident to take similar steps–strikes and other workplace-based actions–to fight for good jobs and decent wages, and take on Ford’s agenda.

Spring’s Labour Caucus will host a meeting on Sunday, October 16 at 5:00 p.m. EDT on Zoom: Building solidarity with Ontario’s education workers. Join the discussion and be part of a solidarity action in your community. Email info@springmag.ca for the Zoom link.

If you can’t attend the meeting, but want help organizing support for education workers, click here to join Spring’s Labour Caucus and we’ll connect you with activists in your union and sector.