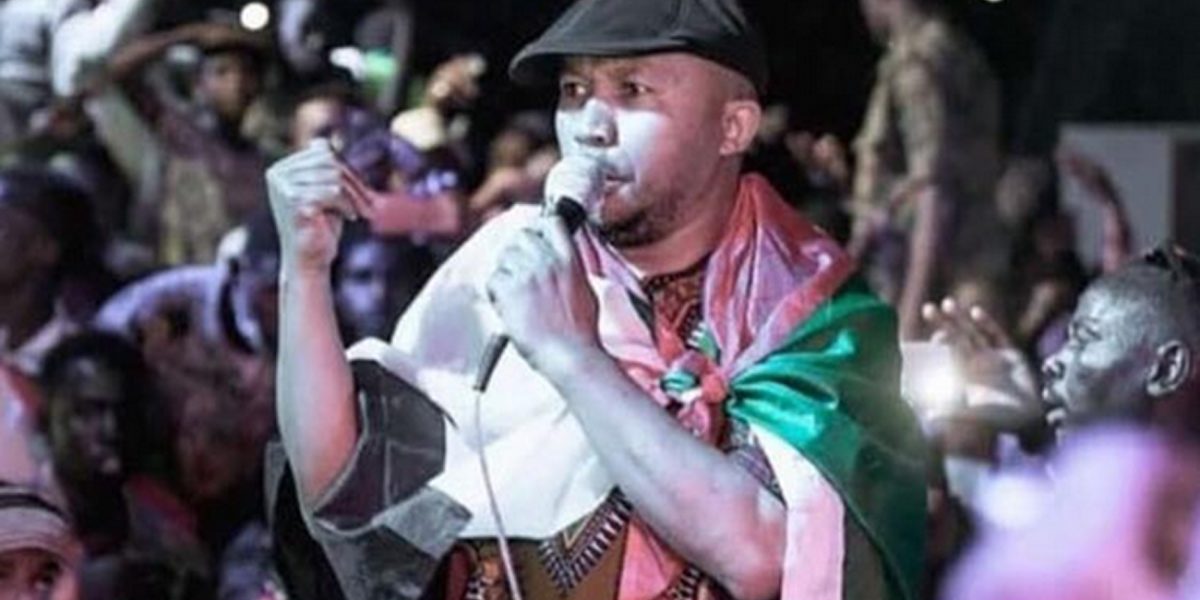 Sudanese artist, Ayman Mao has been performing political reggae songs in Arabic for decades. During the 2019 uprising, his pounding anthem “Dum” (Blood) became the soundtrack to the revolution, performing it for the massive sit-in outside the military headquarters in Khartoum. Nafisa Mohamed and Peter Hogarth sat down with Ayman Mao to talk music and revolution.

Could you tell us your story about leaving Sudan and about how you have stayed so connected to politics there?

When I was in Sudan, I used to have a band and try to perform.Of course, the freedom of speech, they usually come and arrest us for just performing…for silly reasons; you don’t have permission, you don’t have this. They would take us to jail or penitentiary. In the morning, when the judge come and see us, he would say “Ok, why are these people here?” And then they would let us go. They mess up the whole plan, so I had to leave and I almost forgot about it, because there was no way to deliver my message 7000 miles away. But then with the social media, Facebook, youtube and all of that, I started coming back on the scene again and sending my messages. The main thing this regime was doing was brainwashing the kids, and all the media is controlled. So my main thing was to try and have some influence to try and reach the youth. You know, tell them, it’s not all about praising this government, it’s not all about killing and oppression and all of that. I was giving those messages slowly, I think consistently for 12 years, a lot of people thought I was crazy. I kept going. Then, September, 2013 was the first uprising and I came up with a song for that particular reason, but it wasn’t popular or anything. But the kids were memorizing the lyrics, so it wasn’t until 2019 that they all knew the lyrics. They were just oppressed seven years earlier and couldn’t say anything. And that song was “Blood.” It became the anthem for the 2019 revolution. I’m glad I made it to that day.

Your music sounds very influenced by Roots Reggae and Dancehall, a music rooted in protest, upheaval and change. Who are your influences and what have they taught you?

In Sudan, I used to sing in Jamaican and all that, but my message wasn’t getting across. So I didn’t find my niche until I sang in Arabic. It is very hard to sing reggae, raggamuffin in Arabic, so that’s when the message started to spread out beyond Sudan and into the Middle East and all that. Protest songs are the only thing I ever sang. No love songs, so I tricked people. I would make the title like “romance” or “love” or something and then when they listened to it it would be political.

Why do you think your song “blood” has become an anthem for the revolution in Sudan?

I’m going to give credit to the fans, because they actually found a way to sing it without music and added some chant to it. So they would say the verse and then they would say revolution. So, I give them all the credit. And with the social media it started spreading.

It must have felt special when you performed it for the sit-in outside of the Military Headquarters in Khartoum during the revolution?

I wasn’t going to back down. I went to some radio station and they blocked some of the lyrics, so I did not go back there. I would do it again…all over! I was protected by two million people. So I give all credit to the revolution for giving me the opportunity to go back and see my country again. It is a blessing.

What is the Sudanese hip-hop scene like? At home and abroad? Are all artists as political as you?

There is a lot of underground rappers, hip hop, reggae artists in Sudan; young, promising and everything. I am connected to most of them underground through Facebook. And to be honest, the guy who sent me the riddim for “Blood” he was in Sudan at the time. But it was difficult for them to participate at the time, it was supposed to be a project, but for safety reasons I told them to stay out of it and I’ll do it by myself. But they were all connected. At that time, they could not speak out because it was very brutal, but now you will see a huge change in the hip hop and reggae scene in Sudan, there is a lot of artists now that can speak freely. There are also a lot of Sudanese artists outside of Sudan too with the social media. Now, what this regime did was spread out the people of Sudan all over the globe. Youtube has a feature that allows you to see where people are viewing your videos, so when I post something, you have no idea: Brazil, Australia, all over. And that is one of the advantages that the revolution in Sudan had, we got support from all over the globe.

What do you think needs to happen for the people’s side to win?

We all know that what we have now is not 100 percent freedom or democracy and there is a deep-state trying to come back and they have billions of dollars to try and come back. So we can’t give up, we will continue to fight.