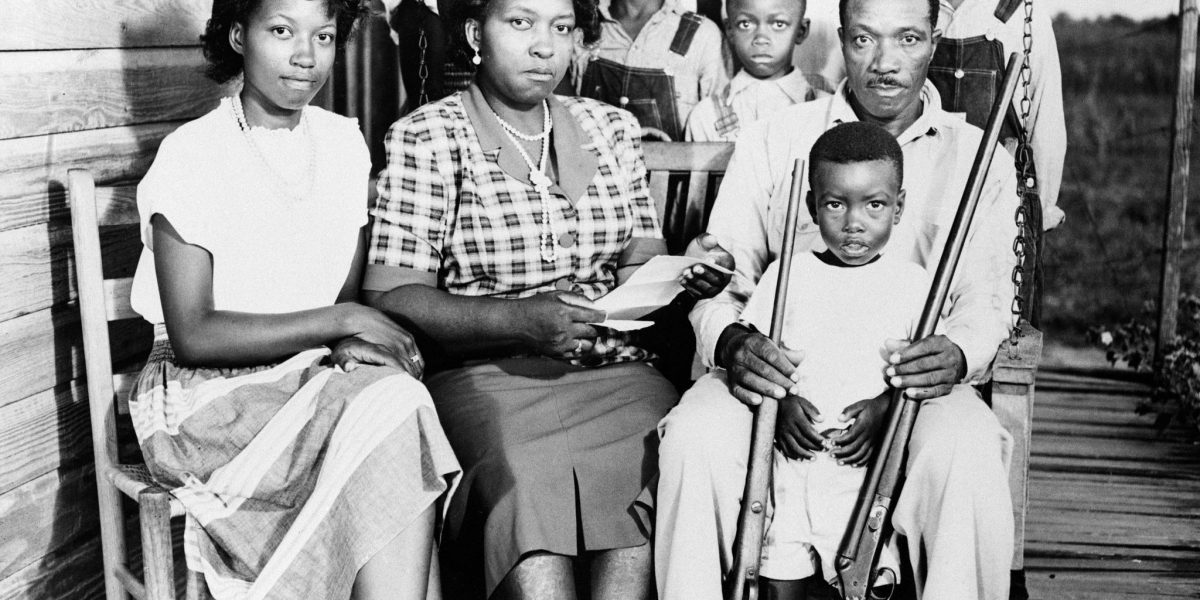 This Nonviolent Stuff’ll Get You Killed: How Guns Made the Civil Rights Movement Possible by Charles E. Cobb Jr. (Duke University Press, 2015).

In This Nonviolent Stuff’ll Get You Killed, Charles E. Cobb Jr. makes the case that the use of guns for self-defense in the “non-violent” civil rights movement was necessary and vital to the movement’s survival. Charles E Cobb Jr is a former field secretary for the Student Nonviolent Coordinating Committee (SNCC) and has taught at Brown University. In this book, which draws heavily on his experience and the interviews of other civil rights participants in the Deep South in the 1960s, he shatters some commonly held myths about the movement for racial equality in the United States of America.

Many think of the 1960s civil rights movement as one of principled nonviolent resistance to segregation and racism. However, Cobb’s book emphasizes the stark differences between the Freedom Movement in the urban North versus the rural South. In the rural South, guns and the use of them for self-defense became an accepted practice that urban and Northern civil rights organizers had to accept or risk alienating the very people they were trying to organize.

The convincing narrative that Cobb puts forth argues that there has always been organized Black resistance to white supremacy, and in the Deep South that resistance has involved guns. The history of the 1960s civil rights movement, Cobb argues, is not one of non-violence so much as “unviolence.” His goal is to make it crystal clear to the reader that, despite a wealth of writing that emphasizes the movement’s deeply held principles of nonviolence, the goal of the movement was to “get free” rather than be nonviolent.

Nonviolence was merely accepted as the best tactic for that goal. While some movement participants had deeply-held beliefs in pacifism and nonviolence, for many more participants they were simply using the tactics that they saw best suited to winning civil rights and ending segregation. Therefore, civil rights activists from groups like SNCC, SCLC, NAACP, CORE and others organizing in the Deep South had to deal with the reality that many of the Black people they were trying to organize where reluctant to completely buy into a principle of non-violence because their experience with white terrorism and the Ku Klux Klan made armed self-defense a necessary reality for them.

Cobb examines the history of Black armed self-defense, from the earliest years of colonial America to the 1950s and 60s, focusing on the rural South to demonstrate the unique and contradictory role that guns played. Some of the terms that are so commonly debated today in relation to movements then and now–”militant”, “radical”, “left-wing”, “moderate”–were not common terms or contentious issues for many of the participants in the rural South. Because guns were so common in the South, for protection and to put food on the table, there was far less controversy about their use in the nonviolent Freedom Movement than the subsequent scholarship might have you believe.

One of the most common tropes of the US civil rights struggle is that there was a clear distinction between the early King-influenced nonviolent movement and the later violent Black Power movement exemplified by the Black Panther Party. However the stories, interviews and primary sources in Cobb’s book show that armed community self-defense and guns played a much bigger role in the nonviolent Freedom Movement than many have assumed.

As Cobb emphasizes, “although non-violence was crucial to the gains made by the freedom struggle of the 1950s and 60s those gains could not have been achieved without the complementary and still underappreciated practice of armed self-defense. The claim that armed self-defense was a necessary aspect of the civil rights movement is still controversial. However wielding weapons let both participants in nonviolent struggle and their sympathizers protect themselves and others under terrorist attack for their civil Rights activities. This willingness to use deadly force ensured the survival not only of countless brave men and women but also have the freedom struggle itself.”

The book includes a brief history of the Black quest for freedom, from slave rebellions to the Civil War; two examples of self-defence and bravery in which guns played a defining role.  More than anything though, Cobb emphasizes the important role that World War II had in changing the Black Freedom Struggle in America. Black veterans changed the atmosphere and horizons of the civil rights movement in the South. These veterans had gone to war and seen societies that were far different from their experience in the United States. The realization that they were more free at war than they were in the US at peace made many veterans even more resolved to never back down from white terrorism and racial injustice.

So, when organizers from SNCC and CORE would come to town and try to persuade local people to commit to a principle of nonviolence, many veterans and elders pushed back with their experience in places like Mississippi, Alabama, Louisiana and elsewhere. These elders often had a lot of admiration and respect for the young organizers coming to town, but they also refused to  let them be killed or harassed by white terrorism from vigilantes or law enforcement itself. This meant that the civil rights organizers were often guarded by their local protectors with or without their knowledge. It also meant that unless, in some cases, they agreed to let local people keep their guns or provide protection to nonviolent direct actions then the local people would not join in on their campaigns.

This provides a key enduring lesson from that era that is captured well in this book: “There is a core reality that strong movements are built by developing inclusive relationships capable of knitting together strategies formed as a result of listening to ordinary people’s experiences and ideas for change.” In the case of the Freedom Movement of the 1960s, this often meant taking local feedback on what the most important campaign for rural African Americans was and taking advice and protection from the community. Local people would provide room and lodging for organizers and they would also insist on armed protection. This came from their desire for better lives and the experience of the racist terror of the South.

These realities led to the self-organization of groups to protect the nonviolent civil rights movement. These groups were often organized outside of the official civil rights movement and provided protection to dissuade law enforcement and white terrorist groups from disrupting or harming actions and participants. The most famous and well-known of these groups was the Louisiana-originated Deacons of Defense, which at one point grew to dozens of secretive chapters across the South.

This Nonviolent Stuff’ll Get You Killed is an accessible read filled with captivating anecdotes that is worth reading for anyone considering the strategies and tactics by which we try to improve our world. The freedom struggle continues today and while issues of gun rights have largely become associated with the conservative right, this book documents a time “when people on both sides of America’s racial divide embraced their right to self-protection and when rights were won because of it. We would do well to remember that fact today.”