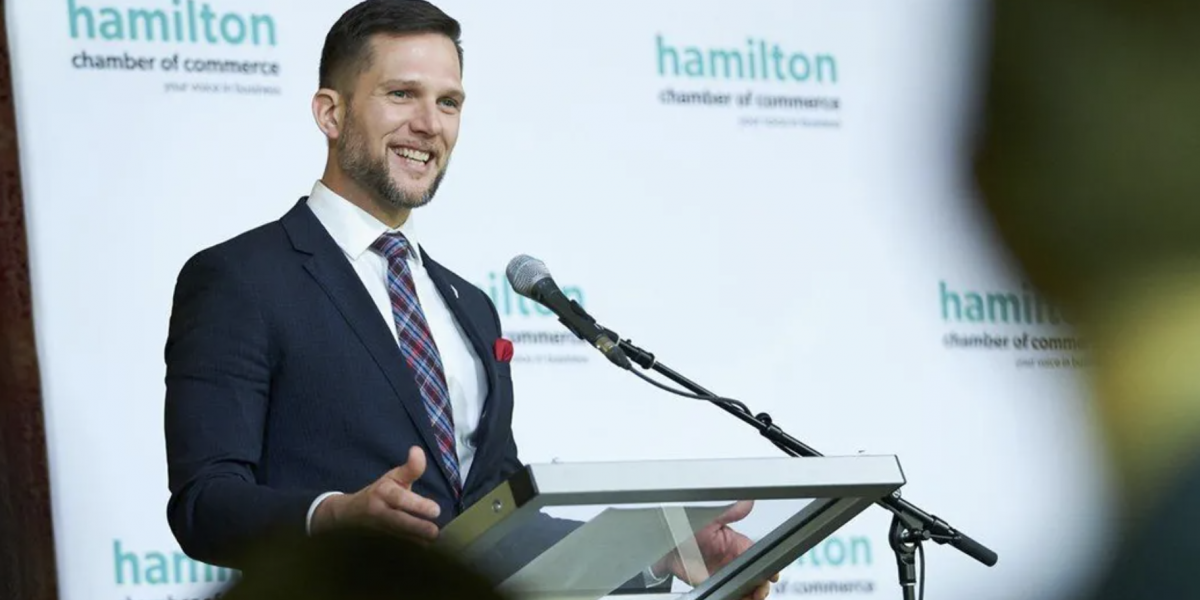 The Hamilton municipal elections were appearing to be a sleepy affair. Aside from a few exciting council and trustee candidates, the mayoral race has created little interest. However, over the last two weeks the campaign has heated up.

Former Ontario NDP leader Andrea Horwath entered the race late and appeared to be counting on name recognition and a vanilla platform to coast to victory. Business interests threw their support toward former head of the Chamber of Commerce, Keanin Loomis, who had been the voice of opposition to provincial increases to minimum wage and improvements to public pension programs. Although Horwath appears to have a solid lead, Loomis’ campaign has been effectively pitching itself as “new” and “fresh” even though the politics he espouses are the same neoliberal centrism that have dominated for the last forty years.

Despite building some momentum, Loomis found himself in hot water last week when he was quoted telling an audience that the city should get out of public housing and that private non-profits should be given the role. Housing is a huge issue in the city, with increased housing and rental costs pushing more into precarious situations and homelessness growing. Like many cities, tent encampments have popped up in response to housing shortages and poor shelter conditions.

City housing is overtaxed and needs more resources to adequately deal with both creating new housing and the repair and maintenance backlogs. The idea that non-profit entities could handle the growing crisis is laughable and Loomis backed off his comments, saying he misspoke and needs to know more about housing. But many have pointed out that the comments are revelatory, showing his real neoliberal colours and beliefs that private companies are inherently better at providing social goods governments have long offered.

Two subsequent scandals popped up for Loomis. A Hamilton Spectator profile documented an incident when he was with the Chamber of Commerce, going uninvited to confront YWCA director after a YWCA staff wrote a negative opinion piece criticizing the Chamber for not having a woman moderator for an event it put on with Michelle Obama. It was reported that Loomis said there was no other woman who “could hold the audience.” Later an old tweet from Loomis appeared showing him mocking a UFCW picket line outside of the Renata Hotel for inconveniencing him.

For many, the latter confirmed that Loomis would be an enemy of workers, suspicions fermented when Loomis, while at the Chamber, actively lobbied against improvements to CPP and the increases to the minimum wage. Hamilton District Labour Council denounced Loomis for the tweet.

Horwath sailing along but not exciting anyone

Those who saw the lackluster last few years of Andrea Horwath’s leadership won’t be surprised that her campaign has done little to excite voters. She is counting on name recognition and her longstanding experience representing Hamilton Centre to take her to victory.

Her platform is not especially distinguishable from Loomis and she has not made herself especially visible during the campaign. This has allowed Loomis to portray himself as a new face and new energy, despite representing very old and tired kinds of politics.

Despite Horwath not bringing much energy to the campaign, polls suggest she will win. More exciting have been the emergence of activists running for city council and school board trustee.

Kojo Damptey, running for council in Ward 14, was an OPIRG leader at McMaster University while in school and helped push the university to recognize and celebrate Black History Month. During the pandemic he helped found the Mountain Mutual Aid Network to assist those struggling to access system supports. He is the Executive Director and in that role has helped push back against the growing rate of hate crime in the city. An activist and musician, Kojo has faced attacks from increasingly confident far right, having his adverts defaced by racist stickers, which has been universally condemned but shows the ongoing obstacles and hate candidates of colour face on the campaign trail.

Sabreina Dahab is running for Hamilton Wentworth District School Board trustee in Ward 2. She was interviewed by Spring in 2020 about her role founding Hamilton Students for Justice, formerly known as HWDSB Kids Need Help which “fought against racism, ableism, and all forms of oppression in Hamilton schools by collecting data, running town-halls, writing reports, meeting with administrators, and organizing direct action.” Most impressive was their campaign against the school board’s police liaison program that was fostering anti-Black racism in schools and leading to several incidents of police violence against students. Despite resistance from trustees, they finally voted to end the program in September 2021. Running for trustee on a progressive program, Sabreina would be an important and radical voice as the far right begins to target school boards and curriculums that embrace any form of anti-racism and anti-oppression framework.

Ahona Mehdi is running for Hamilton Wentworth District School Board trustee in Wards 8 & 14. She was a previous student Trustee at the Hamilton-Wentworth District School Board and was vocal about her experiences of racism and Islamophobia during her term. Ahona has various experiences of community advocacy through Hamilton Students for Justice, the Disability Justice Network of Ontario, and the Learning Disabilities Association of Halton and Hamilton. Ahona is a strong candidate who is undoubtedly the young voice needed to reimagine an equitable education system for marginalized students.

Socialists know that electing good councilors and trustees is not enough and if elected Kojo and Sabreina will need help from movements on the ground to be able to push for the change they espouse. Their election on October 24 will give us the confidence to build those.