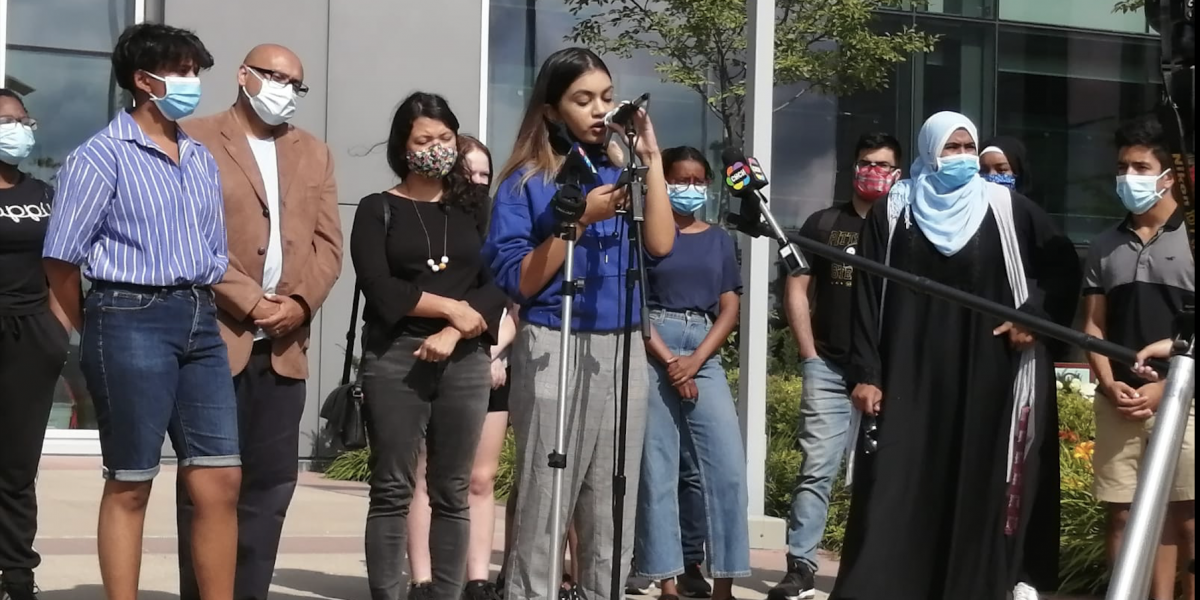 On August 1, 2020, Ahona Mehdi, a student Trustee at the Hamilton-Wentworth District School Board marked the end of her term with a blistering criticism of her time as the trustee, detailing the racism she experienced directly from trustees and staff. On August 3, 2020, the HWDSB Kids Need group held a press conference where Mehdi and others spoke about their experiences and their demands. Here are Mehdi’s remarks.

My role as a student trustee was patronizing but this wasn’t the extent of my experience. This role opened my eyes to the submissiveness expected of not only brown women but all racialized and marginalized board affiliates and educational stakeholders. I want to make it clear that there are two options when you are affiliated with ground level work within the HWDSB and those options are to be complicit or to be dehumanized. Entering this role, students trusted me because I promised to advocate for the marginalized and for the voiceless, and to the best of my ability, I did.

But this was at the cost of my own well-being, constant racial gaslighting, microaggressions and emotional exhaustion. Throughout my term, I tried to maintain minimal interaction with trustees and staff because it’s extremely draining to continue to work alongside elected officials who continually refuse to acknowledge the deep-rooted systemic injustices that they perpetuate. When stories like my own are brought forward, it’s often argued that marginalized people should have spoken at a different time, or in a different manner. But when it comes to matters of institutionalized oppression, the HWDSB is extremely skilled in creating illusive avenues of reporting and responding.

No marginalized person should be directly referred to complicit or overtly oppressive staff members when faced with human rights concerns. But this is the reality. And this is systemic racism and institutional oppression at work.

Prior to my first board meeting, a white trustee referred to Serena Williams through the use of the N-word and then she continued with ‘or black, or whatever you call them.’ As if this is a correction to her use of a racial slur.

Prior to another board meeting, I bared witness to a conversation surrounding how Muslims and Arabs were evil, anti-Semitic, and violent. The trustees [that] initiated the conversation finalized that we shouldn’t have conversations surrounding those in the middle east, as it was hopeless and there was nothing we could do to help such people.

The same trustee claimed on multiple occasions that black leadership was too prevalent within our board. That we should place our focus on other groups outside of the black community. She claimed that our school board, one that considers the opportunity for racist, violent, police officers to play basketball with our white students to be more valuable than the safety and dignity of our black students, had too much leadership.

Racist rhetoric like this is not only tolerated behind closed doors but even during live streamed, public board meetings. Trustees continually question[ed] the value of our black and marginalized students at the June 22nd board meeting discussing the termination of our police liaison program. And the same occurred when a trustee openly argued that it was unjust to other students to implement an Indigenous student trustee.

Trustees continually disregarded and silenced me and I was consistently told to operate like my white male, co-student trustees. When this wasn’t the case, staff and mentors completely left me out of the loop for student trustee related concerns. And I’m certain this had nothing to do with my ability to work diligently in the role as I was more than competent to do so.

As a racialized representative, this was disturbing to me, as the education system is first and foremost intended to serve students. This is not a difficult or complex concept. Students should have power over their rightful spaces and resources. These are their schools, their classrooms, their experiences, their lives, and their futures at stake. But the HWDSB has time and time again failed to meet the needs of black, Indigenous, racialized, and marginalized students.

As a brown student from a Muslim family, I was constantly faced with belittlement. This included being shamed by a white trustee for not wearing a Christmas sweater to a board meeting, as well as other trustees. When eager to address the problematic, tunnel vision, isolated approach of the boards safe school panel, the same trustee labelled me as aggressive.

After experiencing systemic racism at the hands of HWDSB staff and trustees and hearing an outcry from the community, I was patronized and told not to read a whole soliloquy about my experiences and perspectives with systemic oppression, but rather to give white staff the benefit of the doubt. I was told that otherwise, no one would want to listen to me. Prior to the board meeting, trustees were directed to review my speaking points. Other trustees shared their lived experiences, read their soliloquies and were praised. But I was filtered. I was filtered on multiple occasions throughout my term not because I was wrong or incompetent, but rather because the HWDSB refuses to hold themselves accountable and take responsibility for the injustices they perpetuate. Without public pressure, after harm has been done, the HWDSB is silent and complicit.

The stories I’ve outlined are direct and explicit examples of racism among our trustees. But they do not begin to address the repeated microaggressions, implicit oppression, and systemic racism that our school board not only upholds but tactfully perpetuates.

When I took to Twitter on Saturday, I was shocked by the response because after a year of serving my experience has been so normalized. But I want to be clear about the fact that I did not come forward to ask for sympathy, personal justice, or pity. This group of leaders have given me more strength than I could ever ask for throughout my term and that’s enough for me. But I want to emphasize that the issue of systemic racism goes far beyond my own experience.

This is about the fact that the board actively and deliberately belittles, disregards, and villainizes the most vulnerable of our staff and students. And organizers like the HWDSB Kids Need Help coalition have been fighting tirelessly for years.

Trustees are responsible for approving policy and making major decisions for the wellbeing and safety of our students. If even these overt acts of racism i have mentioned are not acknowledged, the future of our most vulnerable students will continue to be left to the hands of our oppressors. If trustees fail to consider the impacts of their words and actions on black, Indigenous, and racialized students, then are they the right people to be making decisions for our students? From school closures like the closure of SJAM and Delta to Brown Tree and catchment adjustments making it hard for black students to access certain programming in the city, to what facilities for what schools are funded based on certain alumni relationships with trustees, the decisions of trustees impact the experiences of our marginalized students and we have to do better for them.

It’s not my obligation to publicly name the trustees at this time. But they also know exactly who they are. It is my obligation though, to make it clear that during each of these incidents I have outlined, at least one other trustee was also present and complicit. The HWDSB chair can claim that racism will not be tolerated within our board, but it has been time and time again.And the very people preaching of intolerance have never failed to perpetuate it. It either explicitly, implicitly, or through their complicity.

HWDSB Kids Need Help demands for the School Board

This speech was transcribed for publication by Hiva