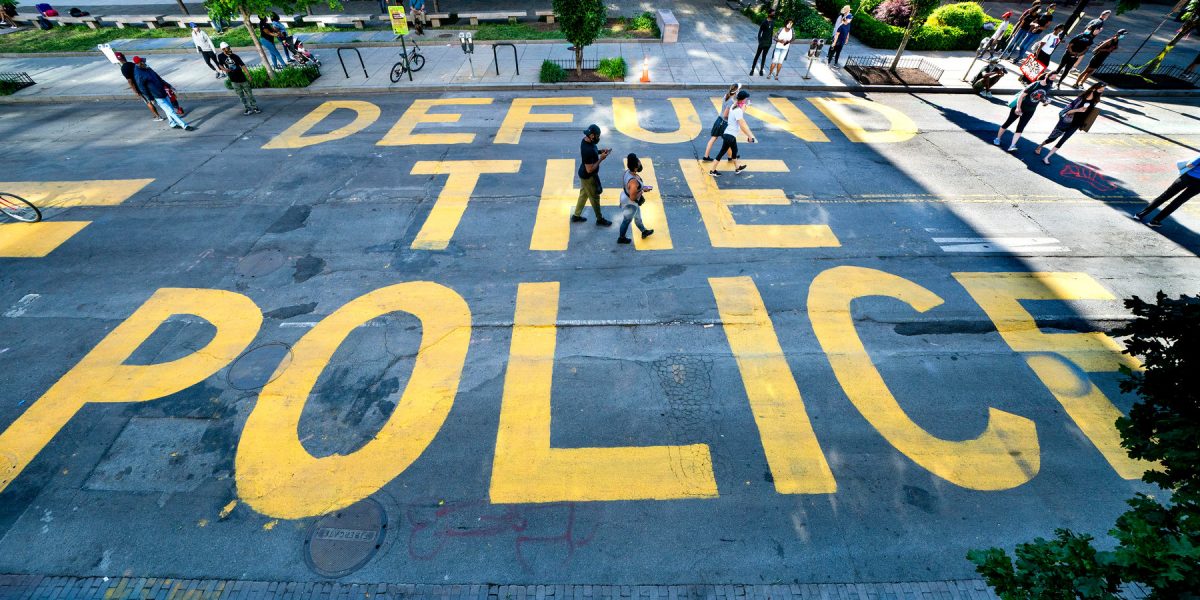 Policing is a powerful tool of capitalism. For more than a century, the ruling class has used it as a way to protect property and profit. True to the system that created it, policing has been a tool to tear our communities apart by further pitting us against each other – all to guard the accumulation of capital for those who have it.

Thankfully, the battle to defund the police goes on. And it’s not just an issue for big city activists. In communities such as Barrie, Ontario – where city council just approved a police budget worth nearly $60 million annually – there remains strong and growing opposition to the continuing allegiance of politicians to this racist and colonial concept of public safety.

Policing does not make us safe

Policing is not only a very expensive and substandard way to prevent crime, but also a discriminatory way to maintain justice in our communities. The police perpetuate and reinforce the structures of racism and colonialism in our communities. As Sandy Hudson notes “Black communities interact with police regularly because we live in neighbourhoods police target. We are experts in the ways that police can brutalize and inflict violence upon us. Their presence is no assurance of safety in Black communities. This is often true for Indigenous communities and communities living in poverty as well.”

We know that wage theft by employers is a much greater problem than other forms of theft and robbery. But the latter two are always prioritized. And that’s because, even though misguided ideas such as the theory of broken windows have been debunked time and time again, police and their defenders still try to scare the public into believing we need this so-called “thin blue line” to keep our society from sliding into chaos. In truth, policing only serves to label people as criminals.

The way we look at politics in our cities is so very limiting. But it doesn’t have to be that way. A couple of years ago, a friend of mine gave me a pin that has “Build Communities” written on it. I wear it as a reminder of the policies we need to prioritize to build and support a city where we take care of each other and keep each other safe. Care is at the heart of this belief. It’s what community means to me. Unfortunately, for many politicians, community means having militarized agents of the state patrolling streets and protecting property at the expense of people – all while sucking up huge chunks of municipal budgets.

A more hopeful and positive road to safety and security is to transfer taxpayers’ dollars away from the police. Our so-called leaders can’t talk about the existence of systemic problems and then do nothing to actually change the system. That is a complete failure of leadership. We look to our elected officials to do what is necessary when the moment demands it. Sadly, when it comes to creating and encouraging a system of public safety that truly responds to the needs of people, we haven’t seen it.

I honestly cannot understand how people can simply take as gospel the idea that the police need such large portions of municipal budgets (they deserve zero, actually) to keep people safe. It’s extortion that simply wouldn’t be tolerated if it came from other organizations or agencies.

We need to get our priorities right. Our communities should be a place where everybody is safe and supported, and where everyone has access to the services they need. Giving in to the police and their demands limits our ability to do this. And it makes everyone less safe because that money takes resources away from programs and services that can actually prevent crime.

Bloated police budgets mean more people living rough this winter. They mean fewer programs and services for youth and seniors. They mean inadequate transit. They mean delays to critical infrastructure projects. They mean not being able to do everything that is required to address the climate emergency we are in right now.

And by starving other services and resources of proper funding, the police help to create the conditions where inequality, hate and racism can fester and grow.

So, as I see it, our politicians have two choices: they can stick to the status quo and ignore the blatantly obvious need and desire to fundamentally change a broken system, or they can finally start to build the kinds of communities we all deserve. Bringing together community partners to create a pathway towards defunding the police would be a good start, and I hope we begin to see it in our cities soon. At the very least, we need to have important conversations about the police and how they are not serving the public good.

I believe sociologist Alex Vitale, who has done decades of research into policing and its negative effects on communities, sums it up best in his book The End of Policing:

“We cannot demand that the police get rid of those ‘annoying’ homeless people in the park or the ‘threatening’ young people on the corner and simultaneously call for affordable housing and youth jobs because the state is only offering the former and will deny us the latter every time. Yes, communities deserve protection from crime and even disorder, but we must always demand those without reliance on the coercion, violence, and humiliation that undergird our criminal justice system. The state may try to solve those problems through police power, but we should not encourage or reward such short-sighted, counterproductive, and unjust approaches. We should demand safety and security – but not at the hands of the police. In the end, they rarely provide either.”