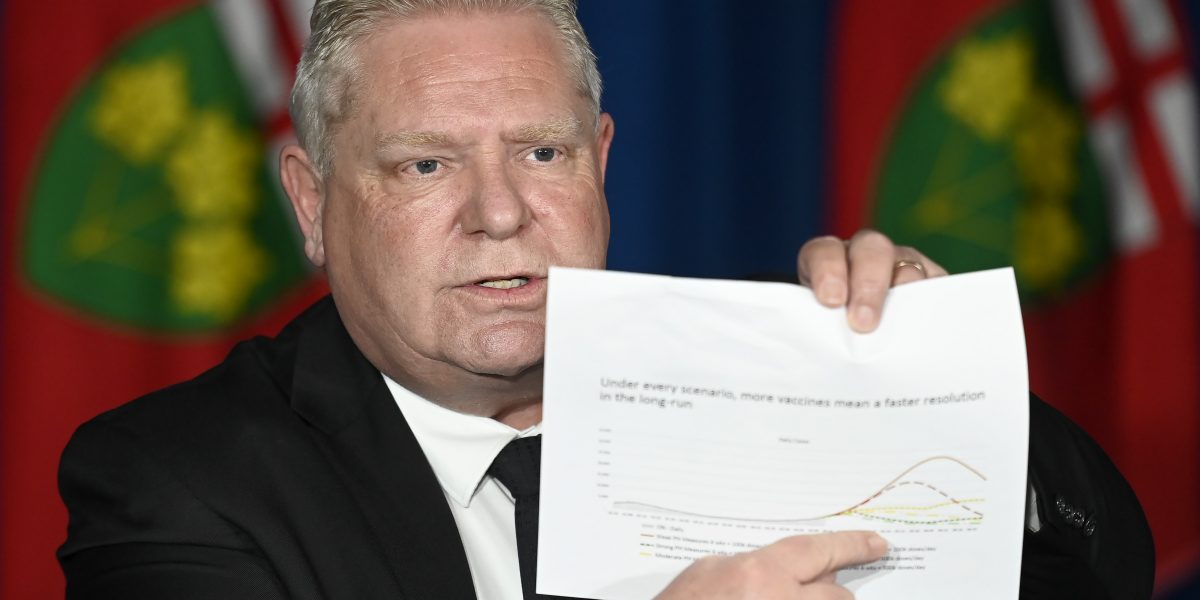 “Existing health inequities meant that some groups most at risk from COVID-19 were the same populations disproportionately impacted by public health measures… Some populations, already experiencing poorer health and fewer opportunities to achieve good health, faced the pandemic at a greater risk of direct impacts (i.e., illness and death) and carried a greater burden of the public health measures.”

That’s why she called for an equity approach to COVID-19. But Ontario Premier Doug Ford has done the opposite for 20 months, with pandemic responses that fuel COVID-19 inequity.

It makes sense to limit non-essential travel during a pandemic, but many people need to cross borders as part of their livelihoods. Since the start of the pandemic the World Health Organization has advised against border closures:

“In general, evidence shows that restricting the movement of people and goods during public health emergencies is ineffective in most situations and may divert resources from other interventions. Furthermore, restrictions may interrupt needed aid and technical support, may disrupt businesses, and may have negative social and economic effects on the affected countries.”

Instead, governments responded with one-way border control that fuels inequity—allowing their own citizens to travel, while closing the borders to migrants. Ford’s first pandemic advice was for people in Ontario to cross borders and travel on spring break. “Go away, have a good time, enjoy yourself,” as he explained on March 12, 2020. While this applied to non-essential holidays of Canadian citizens, the border was closed for the essential work of migrants.

As the Migrant Workers Alliance for Change explained, “On March 18, when Canada closed its borders, 74 workers were scheduled to travel to Canada from Trinidad and Tobago. These workers were stranded without any income or support.” Border control and the denial of status have entrenched conditions of precarious work and led to outbreaks affecting migrant workers.

Ford has no jurisdiction over borders. But he has repeatedly portrayed COVID-19 as a foreign threat and called for border closures—regardless of how few cases are travel related and how ineffective border closures are—rather than improving workplace conditions which are provincial jurisdiction. In December, 2020 Ford declared COVID-19 represented “threats coming in from outside, at our borders,” at a time when travel accounted for less than 0.31% of new COVID-19 cases. But the call to restrict travel did not apply to his finance minister, Rod Phillips, who enjoyed a Caribbean holiday. Not only have border closures failed at their intended purpose of stopping COVID, they have actually fuelled the pandemic and its disproportionate impact—by contributing to conditions of precarious work that put migrant workers at risk.

It also makes sense for people to stay at home during a pandemic, but without addressing inequities policies will fail. Similar to border closures, lockdowns can make the government seem tough on COVID while doing nothing to help those at greatest risk—and relying on policing pandemic policies rather than improving workplace protections.

In the Greater Toronto Area, 65% of workers do what is considered “essential work”, so the lockdown did not apply to 2 million people. As a Toronto Star investigation found, the results were predictable:

“in the first wave, lockdowns worked instantly in richer, whiter neighbourhoods but failed to flatten the curve in the poorest, most racialized ones…This racialized tilt is not a function of race itself, research shows, rather of who performs essential but low-paying work.”

Lockdowns did nothing to lessen workplace transmission on farms, in factories, or in long-term care homes that experienced severe outbreaks. Instead, Ford’s focus on policing the pandemic led to security guards outside long-term homes rather than decent work inside, and giving more powers to police neighbourhoods rather than providing pay sick days.

Stay home when sick…if you have paid sick days

Since the start of the pandemic, the main public health message has been, “stay home when sick.” But paid sick days are denied to those at greatest risk of COVID-19: low-wage and racialized workers on the frontlines of the pandemic. As Lawrence Loh, Medical Officer of Health for Peel, explained last February, “Our own data at Peel Public Health showed that 25 per cent of the cases in our region went to work while they were symptomatic…how will we keep these aggressive new variants at bay if our frontline workers cannot afford to take time off work to stop the spread?”

But Ford cut paid sick days the year before COVID-19, and refused to provide a single paid sick day for the first three waves. Only after massive pressure—and the hypocrisy of Ford himself being able to safely isolate with pay after he was exposed to COVID-19—did he reverse course, promising the “best paid sick days in North America.” But he only provided three temporary paid sick days, which reimburse employers who previously denied paid sick days. Ford planned for these to expire in the dead of the winter, during the ongoing COVID pandemic and seasonal influenza.

While Ford recently announced the extension of the temporary paid sick days program until July, those who already used their three days have no further protections. This is like giving someone a prescription for antibiotics that only cover a third of the course, and then after they use it telling them to rely on the used prescription for the next few months. All workers need 10 permanent and employer-paid sick days plus 14 during public health emergencies, or else workers will have no choice but to go to work sick. But Ford has repeatedly blocked this basic workplace protection and health equity policy.

When safe and effective vaccinations became available after the first year of the pandemic, it became clear that promoting access to vaccination would be key to reducing the impact of the pandemic. But they have been out of reach for those in greatest need. As an analysis by the Wellesley Institute last April found:

“Ontario is not concentrating its vaccination efforts in places with the highest rates of illness, and that the province is not distributing vaccines in an equitable way to areas with racialized populations and low-income neighbourhoods. Furthermore, Toronto appears to have distinctly inequitable processes underway, where neighbourhood poverty, racialization, and COVID-19 rates are negatively associated with vaccination rates.”

Part of this is related to workplace protections, because the denial of paid sick days makes it difficult for workers to get vaccinated. As a survey by SEIU healthcare found when vaccine rollout began, 64% were worried about losing wages to get the vaccine and recover from side effects, and 68% would be more likely to get the vaccine if they had paid sick days. But while many institutions have mandated vaccines, Ford has vote against legislation that would mandate the paid sick days that encourage vaccination.

Vaccine inequity is also related to pharmacies—not the lack of pharmacies to distribute the vaccine, but corporate control over vaccine distribution. As an analysis last March asked, “there are 25 pharmacies in the five Toronto neighbourhoods worst-hit by COVID. Why weren’t any of them chosen to administer vaccines?” The answer was simple, the interests of large corporations was put before the interests of public health. Big corporations like Loblaws, Metro, Sobeys, McKesson (which runs Rexall), Wal-Mart or Costco own just over a third of pharmacies in Toronto, but accounted for over 70 percent of the pharmacies first chosen to distribute the vaccine. In many areas of the Greater Toronto Area, especially outside of downtown, it is small independent pharmacies that serve as the critical health care infrastructure.

Get tested…if you can afford it

Testing is also crucial for pandemic response, but like vaccination it has been inequitably distributed because of corporate control. Ford’s “Director of Pandemic Response” was a lobbyist for Shoppers Drug Mart, who coincidentally have been chosen to distribute COVID-19 tests for both symptomatic and asymptomatic people. As Natalie Mehra from the Ontario Health Coalition explained:

“Under the cover of the pandemic, there had been a lot of privatization. And it really does seem that whoever makes a proposal to Doug Ford’s government gets a contract. That includes pharmacies for testing, we have assessment centres all over Ontario the government could have added staff to do COVID-19 testing, instead they gave contracts to Shoppers Drug Mart and Rexall.”

Turning pharmacies into testing sites for people with active symptoms of COVID-19 places them unnecessarily in contact with immunocompromised people picking up their prescriptions. As ICU physician Michael Warner explained, “It’s the same patient population that an assessment centre deals with, without the same level of protection. And then you have innocent bystanders who aren’t there for that reason who could be infected.”

The pandemic profiteering of Shoppers Drug Mart is now extending to rapid antigen tests. With a rising fourth wave, identifying COVID cases among asymptomatic people is essential, but this requires accessible tests. While many countries and other provinces offer these tests for free, Shoppers Drug Mart is charging $40 for them. This once again adds an unnecessary barrier that disproportionately impacts low-income communities who are at greater risk of COVID-19 because of other inequities.

An equity approach to COVID-19

From border control to lockdowns, and from staying home sick to getting vaccinated and tested for COVID—Ford’s entire pandemic plan ignores inequities that preceded the pandemic. The result has been to fuel COVID inequities—scapegoating migrants, policing essential workers, sending sick workers to work, and keeping vaccines and tests out of the hands of those who need them most.

Now that we are facing rising cases from a new infectious variant, Ford is repeating the same policies: appealing to xenophobic border controls, announcing paid sick leave while blocking legislation, and calling for people to get vaccinated and tested while limiting access due to cost.

But throughout the pandemic there have been movements pushing for alternative pandemic responses that centre equity, which can better address COVID-19 and create a healthier society beyond the pandemic. Instead of border control we need migrant justice. Instead of lockdowns that only benefit wealthy white neighbourhoods and police low-income and racialized neighbourhoods, we need real supports for communities. Instead of abstract calls to stay home sick we need legislated paid sick days. Instead of corporate control over vaccination and testing, we need free public healthcare and local community control.

Take action. Sign and share the petition to make rapid antigen tests free and accessible, and the petition calling for 10 permanent paid sick days for all. Join and promote the Justice for Workers organizing meeting on December 14.