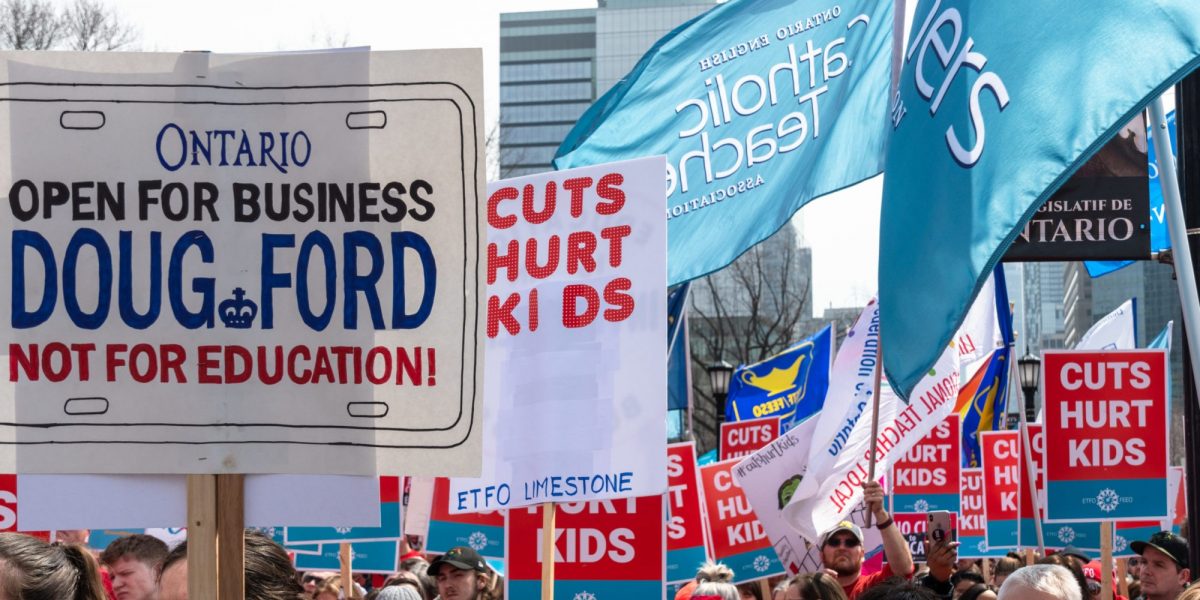 Doug Ford was elected Premier of Ontario promising to make a “government for the people.” What that has mostly meant is cutting public programs and services for the people of Ontario. Public Education has been in his sights from the beginning and as the elementary, secondary and Catholic teachers have turned in near 100% strike votes, Spring Magazine sat down with Elizabeth So, an elementary teacher and shop steward in Toronto, to talk about the resistance to Ford’s education cuts.

What has it been like for teachers since Doug Ford came to office?

It has been stressful and disheartening. We are already working with the bare bones, using our own money to uphold an underfunded education system, and now it’s been even worse. For the 2019-2020 year, TDSB trustees approved $67.8 million of cuts to balance the budget which means fewer supports for our students (Education Assistants/Special Needs Assessment Services staff, reading recovery), cuts to snack/breakfast programs, school supplies, the list goes on. Personally at my school, my principal said his budget has decreased by at least 10% and we were already just scraping by.

Of course, problems with underfunding and under resourcing didn’t start with Ford, how did the previous Liberal government set the stage for this conflict?

Our school has had a huge backlog of repairs going back years. The previous Liberal government set the stage for Ford’s cuts, slashing $500 million, closing schools and reducing support for Special Education.

From 2012 to 2016 we got zero percent wage increases, with 2 unpaid days in 2013-2014. In September 2016 we got a 1% increase and in 2017 a 0.5% increase. Following the remedy and contract extension we ratified with the Wynne Liberals in 2017, we saw increases of 1% and .5% over the next 3 years. So, by my math that is 5% over 7 school years. We are very behind the rate of inflation, so we think it is very reasonable to be asking for a cost of living adjustment/inflation protection in these negotiations.

According to our union’s calculations, the purchasing power of ETFO members’ salaries has eroded by approximately 18% over the last 10 years.

Has the teacher’s strike wave across the US had any influence on teachers here? How so?

Yes, definitely! At ETT (Elementary Teachers of Toronto), we look to the Chicago Teachers, and LA teachers for inspiration.  We know that their deep organizing is what helped with their success. We are trying to organize ourselves within our local using some of their methods and strategies.

Recently, we had UTLA’s (United Teachers of Los Angeles) head organizer, Jollene Levid, come to our Federation Day to speak about their strategies and successes.  I think the teachers who attended Fed Day are inspired and captivated by Jollene’s message.

We know that hiring a full time organizer to do deep organizing, and restructuring their union away from the service model is key to their success. Their strikes were strategic and scientific; things didn’t come together haphazardly. It was years of building capacity among members, parents and the greater community, and it paid off.  We at ETT are striving to implement their methods and strategies. We have hired an organizer; we are starting to establish BBSATs (Building Better Schools Action Team) in each school. We are looking at Jane McAlevy’s examples of organizing (ie: Chicago Teachers) by reading her books and attending her webinars.

As we have seen with other strikes, such as nurses, homecare workers, and education workers recently, teachers in Ontario seem to be striking for a lot more than wages and benefits. What are some of the key demands in this negotiations?

Some of the key issues we are fighting for are: more special education supports. Over the years, schools have been allotted fewer and fewer EAs, and SNAs. Often times, the one EA or SNAS for the entire school ends up with the one student with high needs because it’s so difficult to get a 1 on 1 support for these students. We want lower class sizes and language for caps in Kindergarten, Junior and Intermediate divisions, which we’ve been fighting for years! We also want to maintain the current model of the Ontario Kindergarten program. The government does not want to put language in our agreement to maintain its class cap and size, nor do they want to commit to keeping the certified teacher and early childhood educator team in the classroom (we suspect that the OCT Will be replaced by another ECE as a cost saving measure).

We want to maintain fair hiring practices for teachers based on qualifications and experience, not nepotism. We want to reverse the cuts of $150 million to elementary education, and get language in the collective agreement that addresses violence in schools (1 out of 3 ETT members have suffered injury, illness or mental stress due to school based violence). Our working conditions are our students’ learning conditions.  We want lower class sizes and more supports, so we can do the best to care for our students and help every student reach their full potential.

School strikes can be tough on parents, has there been discussion about how to how win parents over?

Most parents are very supportive of teachers this time around. They are our most powerful allies. It has been so heart-warming to see parents organizing themselves. Ontario Parents Action Network, East End Parents for Public Education, Toronto Centre Parents for Public Education, Ontario Families for Public Education, and other parent groups have been creating and sharing resources about how to lobby your MPP, how to organize a walk-in, how to organize your own neighbourhood group, and showing that they are 100% behind us, even if we have to strike. Even within our schools, parent councils are doing their own leafleting at school, emailing parents information, and participating in and organizing walk-ins. It feels really different this time around.

What can parents, community members, and other workers do to help the teachers win?

Write letters to MPPs, join teachers on the picket line, talk to people at work, your family members, community members openly about how this affects not only our kids, but our society as a whole if we do not educate our population. If there is a local parent action group, join it. If there isn’t one, start one. People in unions can get their union to help support us by also condemning the cuts. Teachers need help running petition drives, and you can encourage your school council to support teachers by helping to disseminate information, like parent updates.

Go to buildingbetterschools.ca for more information on how you can support the teachers’ fight for better public education.