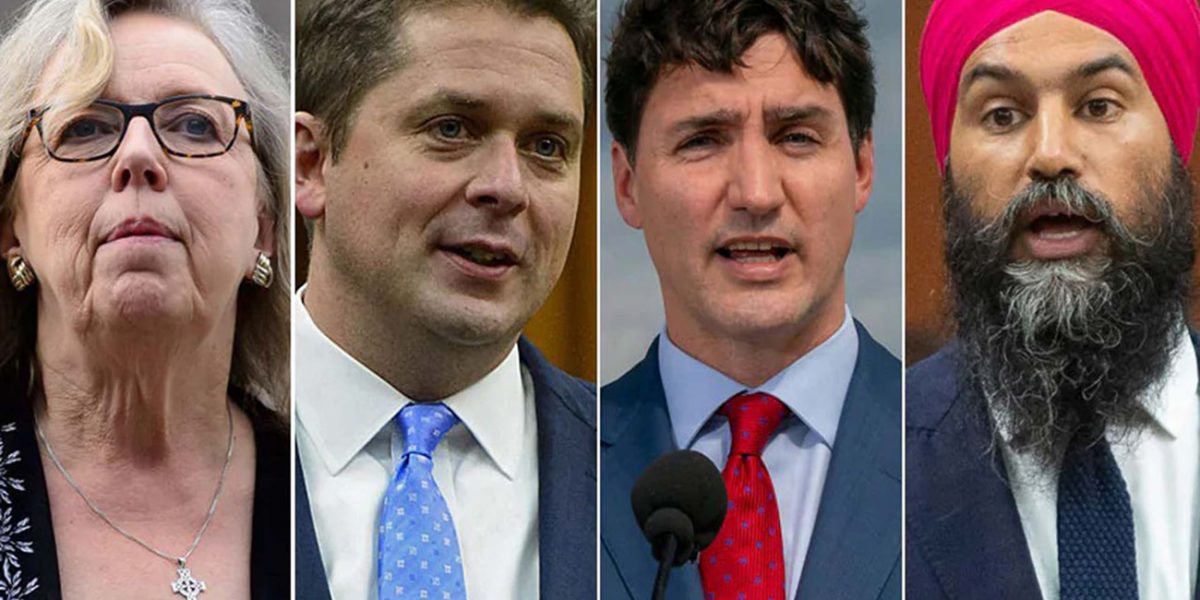 After many months of an unofficial federal election campaign the writ has finally dropped. As we enter the official election period what can we expect from from the political parties in the lead up to the election on October 21?

Just four months ago, many predicted this election would be a runaway win for the Progressive Conservative Party (PC) and its leader Andrew Scheer. Justin Trudeau and the Liberal party were stuck in the middle of a scandal, in which the Prime Minister was accused of pressuring Attorney General Jody Wilson-Raybould to save the SNC-Lavalin engineering firm from criminal prosecution in a case of corruption and fraud. On August 14, Ethics Commissioner Mario Dion released his report on the SNC-Lavalin affair, finding that the Prime Minister had “directly and through his senior officials used various means to exert influence” over Wilson-Raybould, violating Section 9 of the Conflict of Interest Act. The scandal has led to the cabinet resignations of Wilson-Raybould and treasury board president Jane Philpott, who are both now sitting as independent MPs. Trudeau’s principal secretary resigned and so did the clerk of Privy Council.

Amid broken promises and lagging popularity, many saw the scandal as a nail in the coffin of the Trudeau government and the end of the “sunny ways”. But as the election nears, the Liberals have risen in the polls and look – for now – poised to win the election. Scheer and the Conservatives have tried to make Trudeau pay for the blatant corruption, but the scandal has mostly failed to inflict serious damage.

Of course the Conservatives have not wanted to challenge Trudeau’s much bigger scandals: that after campaigning on climate justice and Indigenous sovereignty he spent billions buying a pipeline to cross Indigenous territories without consent, and after pretending to welcome migrants he still supports the Safe Third Country Agreement that turns people away at the border.

The Conservative election campaign is focusing on so-called pocketbook issues, promising that “It’s time for you to get ahead”: a deliberately ambiguous phrase implying someone else is getting ahead—Ottawa elites, or maybe refugees and other immigrants. The Conservatives have been pulled further right by the formation of failed Conservative leadership candidate Maxime Bernier’s explicitly nationalist, xenophobic People’s Party of Canada. Many Conservative MPs have been outspoken under Andrew Scheer, attacking immigrants, and refugees and indigenous people, with no meaningful consequences. Meanwhile, Andrew Scheer shares platforms with known racists. The Liberals are hoping that the racism and anti-immigrant views of the Conservatives, as well as the anti-gay and anti-abortion views of their leader will, scare voters into re-electing Trudeau.

Scheer’s chances have also been hampered by the Premiers of Ontario and Alberta. Doug Ford has been making deep cuts to public education, healthcare, and assistance for post-secondary students, while freezing the minimum wage and rolling back labour laws. The opposition to these cuts – from mass high school walkouts to ongoing campaigns for decent work – have made Ford deeply unpopular, and that has undermined Scheer’s prospects as well. Meanwhile Jason Kenney’s aggressive pipeline support in the midst of the climate crisis and his threats to end equalization payments to other provinces may help Scheer in Alberta, but will likely cost him support in vote-rich Quebec and Ontario. Scheer is running on reducing taxes and eliminating the deficit in five years, replicating the tacticsof Doug Ford in Ontario, by appealing to people’s interest to keep a few extra dollars in their pocket while downplaying the impact cuts to social programs will have on workers’ pocketbooks.

The NDP’s platform, A New Deal for People, is the most ambitious and progressive platform they’ve put forward for many years. The plan promises to expand health care to include dental and mental health services, breaking monopoly pricing on cell phone services and gas, increasing funding for immigration services, funding arts, culture and upholding Indigenous rights and advancing self-determination. The New Deal also promises to create 300,000 green jobs and other powerful plans to tackle climate change. Most recently, the NDP announced an immediate $15 federal minimum wage with a plan to increase it to $20 by 2024.

Unfortunately, provincial NDP governments have undermined the credibility of the federal NDP on these same issues, from the BC NDP conceding to the Green Party and delaying the $15/hr minimum wage, to the Alberta NDP championing tar sands instead of green jobs. These contradictions have also meant the federal NDP has vacillated on some of the most important issues facing voters, especially climate change.

So, while the NDP platform does attempt to address climate change, low wages, precarious unemployment, unaffordable housing, and public services that fall short, it’s not nearly bold enough to capture the imagination of the public. And in any case they have relied on the mainstream press to publicize their policies on the eve of an election, instead of having spent the years since the last federal election campaigning for these very policies.

Meanwhile, the Green Party is polling at over 10% and has even more support in BC and Atlantic Canada. The Trudeau government’s purchase of the Kinder Morgan TransMountain pipeline and tepid answers to the escalating climate crisis, mean voters looking for climate solutions are considering the Greens.  Similarly, NDP voters are also looking at the Green Party. But it is not the answer.

Pull the debate to the left

On October 21 we should vote for the only party associated with the labour movement: the NDP. But we also need to double down on pulling the political debate to the left, connecting campaign issues to movements on the ground.

Fighting for climate justice can expose Trudeau’s scandalous purchase of the Trans Mountain pipeline, which Scheer’s Conservatives would continue. Campaigning for migrant justice can challenge Bernier, Scheer and Trudeau – with the added benefit of helping mend a serious fault line within the workers’ movement. By fighting for decent work locally, provincially and across Canada, we can expose the corporate Liberals and Conservatives, as well as the Greens who are more likely to side with business than workers.

In short, what really matters is how well we organize and build the movements on the ground so that politicians and the racists press don’t weaken and divide us. No matter what the outcome is of the federal election, we must emerge from it ready and prepared to fight on every front.