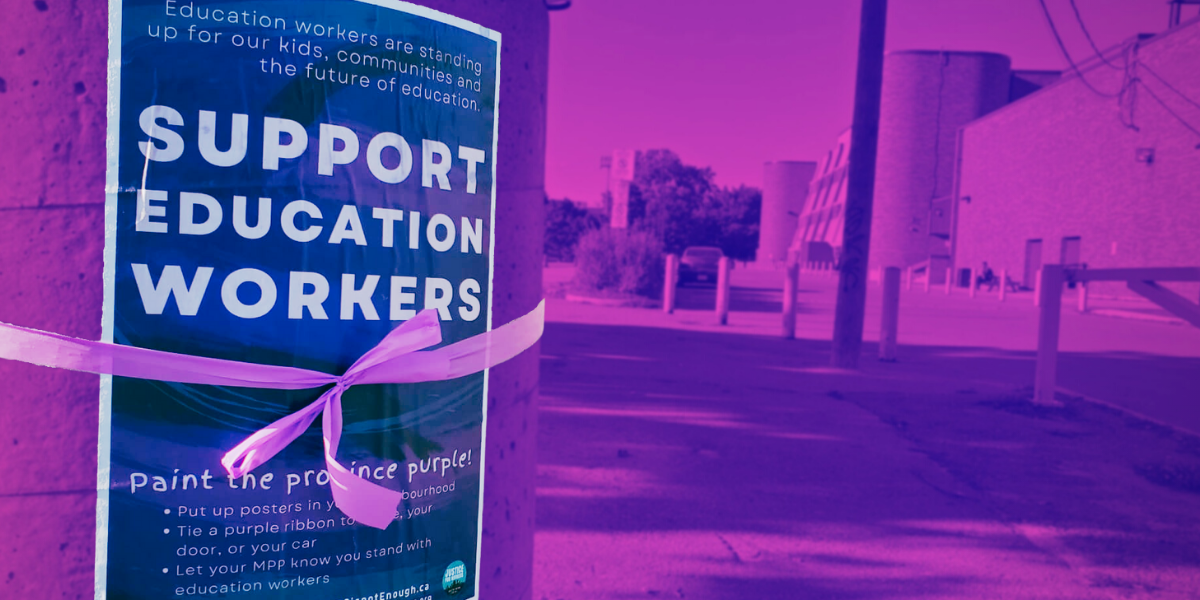 Last week, education workers in Ontario gave their union leadership a massive strike vote mandate. Over 45,000 out of the 55,000 members of CUPE’s Ontario School Board Council of Unions (OSBCU) voted 96.5% in favour of striking if the current round of collective bargaining fails. All signs indicate that the Ford government is looking to cut and privatize where they can, so this historic strike vote is a huge step forward in the battle over the soul of Ontario’s public services.

The strike vote is an indicator of the anger at the Ford government, which has been very publicly bargaining with bad intentions throughout the summer. The difficulty for education workers to eke out a living with low salaries and a rising cost of living has motivated an overwhelming majority to say “enough is enough.” Over the last decade, education workers in Ontario saw their wages cut in real terms by more than 11 percent via legislated wage freezes and restrictions on wage increases brought in by successive Liberal and Conservative governments. The campaign launched by OSBCU called #39kIsNotEnough emphasizes the important work done by a workforce that earns an average salary of $39,000 a year.

A legislative attack on workers

When public sector workers go on strike, the threat of back-to-work legislation looms large. In recent years, we have seen back-to-work legislation used against workers at Canada Post in 2018 and Ontario teachers in 2015. Governments have declared workers as “essential services” to prevent strikes in public transit and healthcare, and court injunctions against picket lines are frequently used to undermine the effectiveness of strikes.

The Conservatives could use their legislative powers to prevent a legal strike or order workers back to work while they are on strike. Ford has even hinted that his government may take such steps, by telling education workers ‘not to force his hand.’

Back-to-work legislation undermines the right to free collective bargaining. The threat of fines and punishment for the right to withhold labour means the government, which is the employer, has the means and motive to avoid fairly negotiating with workers.

But it is not a matter of simply defying back-to-work legislation, it is about defying it in a way that has a chance to win. As labour activists have long claimed, “there is no such thing as an illegal strike, only an unsuccessful one.” The potential risk of defying back-to-work legislation is serious. Teachers first won the right to strike by walking out of class at the same time across the province, despite the government declaring it illegal. Fines won’t matter if workers are united and determined to stay out until their demands are met.

To defy and win means causing a political crisis for the Conservatives centred around the cost of living and the future of Ontario’s schools in order to force them to back down. This will require massive unity on the picket lines and in our communities. It means all education unions, the entire labour movement, parents, and community members standing shoulder to shoulder in opposition to the Conservatives.

The huge vote for a legal strike is a good start, but to defy back-to-work legislation will require ongoing democracy and solidarity beyond CUPE’s membership.

Building solidarity and action amongst teachers will be crucial to winning. Teachers see the work that CUPE members do. They know that classes would be even better with education workers not having to take second jobs. Teachers’ working conditions and students’ learning conditions will be improved if CUPE education workers win. As well, whatever happens in bargaining with education workers will impact teacher negotiations. If CUPE workers are defeated and demoralized, the government will feel confident to squash teacher concerns at the bargaining table.

Concerned teachers and education workers should be making the case right now to co-workers, parents, and community members that the fate of our schools is tied up with achieving positive outcomes for CUPE members. This raises the question of what teachers can do to respect CUPE picket lines. Now is the time to prepare for a potential strike. To pass solidarity pacts and start discussions about honouring picket lines. Schools cannot run safely without the work of CUPE members, nor can classes simply transfer online (IT workers in schools are CUPE members).

Building solidarity in the labour movement

Now is the time to pass motions of support in union locals, prepare to donate to strike funds, and brainstorm collective alternatives of childcare. Solidarity efforts have already begun, such as this call to decorate our local schools with purple ribbon and solidarity posters. Building on these efforts as best we can should be everyone’s next step.

We need to show solidarity in the face of a Conservative government hell-bent on dividing workers and our communities. All workers will feel emboldened if we can collectively push back against public service cuts, poverty wages, and threats to collective bargaining. To give education workers the confidence to potentially defy back-to-work legislation, it will take all of us.

A political crisis for the Tories

Since coming to office, Ford’s Conservatives have attacked workers and public services, weakened and roll backed regulations, mishandled the COVID-19 pandemic, and purposefully underfunded healthcare and education—all while fighting for the interests of big business.

The Conservatives are vulnerable. The 2022 provincial election, which returned the Conservatives to government with another majority, saw a record low 43% voter turnout. Only 17% of the electorate voted for the Conservatives. To win the plurality of those who did vote, Ford’s Conservatives moderated their message, promising they were  “working for workers” and were going to improve public services.

As we face a cost-of-living crisis and an impending recession, there is popular support for increasing workers’ wages and having stronger public services. While this sentiment exists, it needs to be organized and directed into action for it to have an impact.

That means we need to move quickly to make the case to parents and other workers that supporting education workers and their demands for better wages and working conditions is necessary if we want to see an education system that works for all. A strong and visible show of support for education workers can create a political crisis, even for a majority Conservative government, and win a better future for Ontario’s children and all public services in the province.