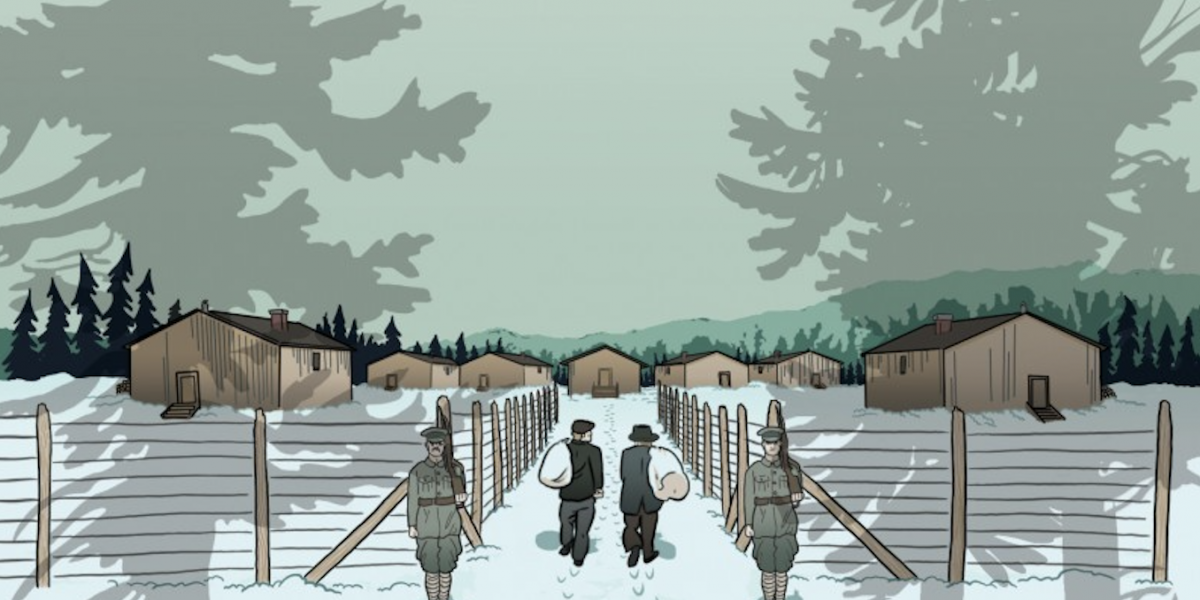 Enemy Alien: A true story of life behind barbed wire by Kassandra Luciuk and Nicole Marie Burton (Between the Lines, 2020).

Enemy Alien tells the story of Canada’s first national internment operations through the eyes of John Boychuk, an internee held in Kapuskasing from 1914 to 1917. The story is based on Boychuk’s actual memoir, which is the only comprehensive internee testimony in existence. Boychuk’s reflections emphasize the much broader context in which internment takes place. This was not an isolated incident, but rather part and parcel of Canadian nation building and the directives of Canada’s settler colonial project.

“I remember what all of us internees promised each other in the camp. We were going to tell the world about how we were tortured… and it would become a part of history.” – John Boychuk

On Jan 29, 2001, Bill C-331 was introduced into the House of Commons. This act notes the provisions of restitution payments, the creation of a museum, as well as educational materials specific to “the injustice that was done to persons of Ukrainian descent and other Europeans who were interned at the time of the First World War.” What’s notably missing from this piece is the recognition that this injustice was done at the hands of the Canadian state. In fact, it wasn’t until 2008 when the Canadian government announced a $10-million education grant to recognize the internment of Ukrainian-Canadians, and an official apology has still not been given. Not to say that an official political apology is the wrong that needs made right. Political apologies need to be based in ongoing consideration and activism, much of which would be in confrontation with Canada’s colonial past and present.

What’s interesting about the history of Canada’s interment camps during WW1 is both how representative it is of the ongoing imperialist and colonial project of the Canadian state, and how important it is to discuss these histories today.

These histories are also deeply personal. Enemy Alien draws from this power of personal narrative to provide nuance and understanding to the broader political record of Canadian interment. Kassandra Luciuk and Nicole Marie Burton draw heavily from the personal accounts of an unknown author, though Luciuk makes the case that it could have likely been penned by John Boychuk, who would later become a communist organizer in Toronto. Burton’s black-and-white art really helps develop the both lonely and personal world of the author. It’s a story that holds you until the final page. It’s touching, infuriating, and incredibly poignant.

When Canada joined the war in 1914, the government quickly implemented the War Measures Act, giving the government the power to seize property belonging a defined suspect persons, as well the ability to arrest, detain, and put into forced labour. Those targeted were generally of German and Austro-Hungarian ancestry. A total of 24 camps were built across Canada, with over 8, 500 people detained. The forced labour varied across the country, but included such large projects as the development of Banff national park. John Boychuk was detained at an interment camp in Kapuskasing, Ontario from 1914 to 1917. 100 detainees would die at this camp until it was closed in 1920.

Boychuk is immediately faced with xenophobia at the hand of the Canadian government. He and his comrades are faced with physical and psychological trauma and abuse, yet despite this, there are resolute threads of resistance and solidarity that ring throughout the graphic novel. When faced with both threats and acts of violence, the detainees find strength in their collective actions of work stoppages, hunger strikes, and riots. The graphic novel also covers more than just Boychuk’s experience at this camp. We follow his life afterwards, seeing the experiences that are echoed in so many racialized immigrant stories with unfair and poor working conditions, as well as his political organizing, and his eventual return to Kapuskasing.

It is this last section of the story that really hit home for me. As he walks through the streets of the city and to the site of the original interment camp, he says to himself “The people who live here now don’t see Kapuskasing the way I do. In front of me is a picture from 20 years ago where Ukrainians, at the point of bayonets, fed on sauerkraut and rotten liver, cleared hundreds of acres of forest, and made a wasteland fertile.” It’s at this point where it becomes clear that while Boychuk was exceptional, his story is not. Thousands of Canadians were detained during World War 1 to protect “the security, defen[s]e, peace, order and welfare of Canada.”

Sadly, these actions were not carried out in a vacuum. This is not simply Canada making a mistake. These actions are simply another page in Canada’s long-standing history of racist policies. When the war began, around 5, 000 indigenous people served in the Canadian military. Upon their return, they were denied the same benefits given to their white contemporaries. Superintendent General of Indian Affairs, Duncan Campbell Scott, commonly seen as the architect of the residential school system, made attendance compulsory in 1920 for all indigenous children between the ages of 7 and 15. He stated that “our object is to continue until there is not a single Indian in Canada that has not been absorbed into the body politic.”

In the decade prior to the events of Enemy Alien, the federal government raised the Chinese Head tax to $500, followed by the Chinese Immigration Act of 1923, virtually banning all immigration from China for over two decades. And in may of 1914, the infamous Komagata Maru incident took place, in which a group of British Indian citizens were denied the right to immigrate to Canada. And like Boychuk’s, even these stories are not outliers in Canadian history.

The power of Enemy Alien is that it exists in two places at once. It takes place at an internment camp in 1914, and across Canada in 2020. Widespread racism, xenophobia, and unsafe work conditions are pushed on immigrants only to serve the 1%. And yet, the feelings of solidarity and resistance that Boychuk found are also still alive today. The migrants rights movement is growing with organizing taking place in workplaces and communities. Workers are refusing unsafe working conditions, calling for status for all, and fighting for all workers’ rights.