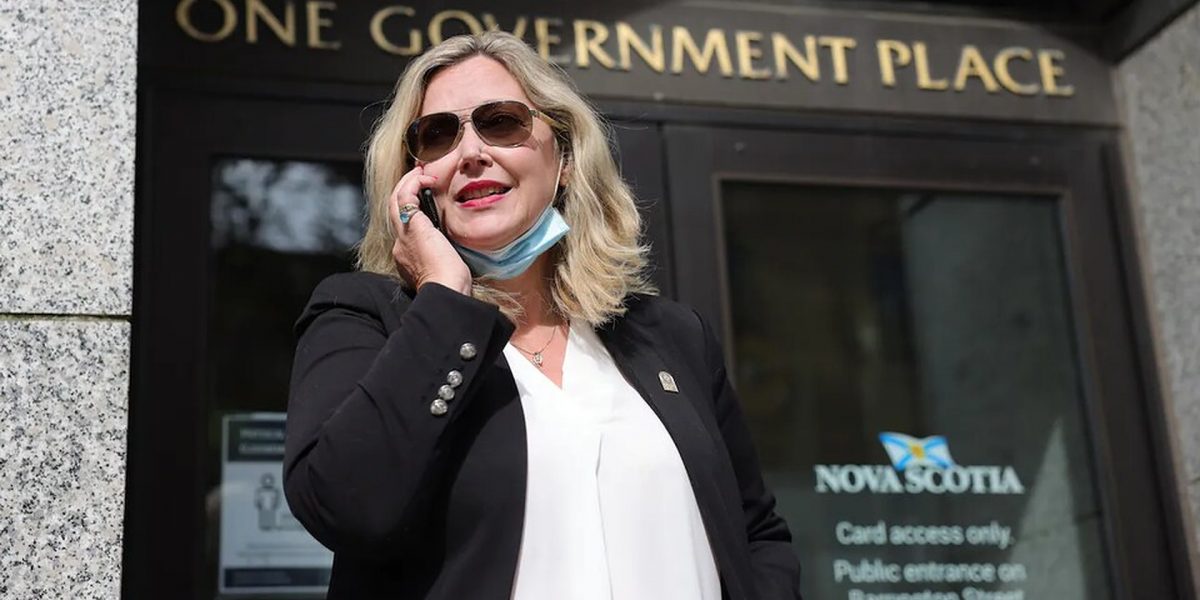 Elizabeth Smith-McCrossin (ESM), local “girlboss” in Cumberland County, Nova Scotia, has a well known history of racist, anti-worker, and anti-queer actions. So, you can imagine my surprise when I saw this poster:

At first glance, I thought this was a Pride event put on by ESM herself, what with her logo and the language of “Elizabeth is inviting you…” I wasn’t the only one who was confused. The Office of the Premier of Nova Scotia phoned the organization, Cumberland Pride, asking if the independent candidate was planning a Pride event. The organizers of this Pride car rally were also confused, until they saw the poster that ESM and her team put out. Indeed, the publicity makes it look as if ESM herself had organized the event, which is simply not the case.

One of the Cumberland Pride organizing members decided to visit ESM’s office to attempt to engage in a respectful dialogue. This organizer, who would prefer not to be named, expressed their concerns to ESM about how this was presented, and how ESM’s past actions of deadnaming trans folks as well as using incorrect pronouns (even after being corrected) have been harmful to the queer community–thus, making her participation in the Pride event appear disingenuous and self-serving.

Instead of acknowledging her harmful actions, ESM  burst into tears, proclaiming, “I can’t do this” and walked away from this concerned organizer. She returned, and was asked about her platform–to which she responded, “I don’t have a platform, I just love everyone.” If only it were that easy. In the end, ESM ended up crying twice during this discussion, making the conversation all about her, not about the queer community or the harm that she has caused them.

This left the Pride organizer feeling exhausted and frustrated, and rightfully so. It is completely legitimate to ask any politician who seeks to participate in Pride where they stand on issues that matter to the queer community. And politicians should be prepared to be called to account for past actions that have harmed the community.

You would think that, after hearing these concerns from a community organizer, ESM would reconsider her participation in the Cumberland Pride rally, or at least rethink how she put her own interests ahead of the community. Instead, she arrived in her own tractor-trailer truck, with a glimmering campaign poster prominently displayed on it, and attempted to lead the rally herself. She even called on participants to line up behind her!

This was extremely inappropriate, especially given the fact that the Cumberland Pride Committee had already planned who would lead the car rally.

After some intervention by organizers, ESM did not lead the rally, but instead followed behind (phew!). But it begs the question: has she learned nothing from the conversations she had with Cumberland Pride prior to the event?

Cumberland Pride, well aware of how their event had been hijacked by a right-wing political incumbent, released this statement:

It is clear from this statement that Cumberland Pride does not support ESM’s participation, which can be understood as “harmful” and “deceitful”. Indeed, seeing a political incumbent make a Pride event about them is bad enough, but for someone to participate regardless of their well established history of anti-queer actions is harmful to other participants and creates an unsafe space. Pride is about the queer community; it is not a platform for opportunistic politicians to exploit.

A community member in Cumberland County, who is also a member of the queer community, reached out to express their concerns with ESM’s tactics:

“One [concern] is the way in which her campaign handled feedback/inquiries related to Pride events. The level of vitriol and anger that was directed at community and allies over real expressed concerns [regarding ESM’s poster and participation] was very troubling.

“As a gay woman, I became very fearful about speaking out about what was so wrong about Elizabeth’s approach to and participation in Pride. The fact that she and her campaign had zero insight into the harm they created. We all know she does not support gays. She has yet to embrace our ideologies and symbols, she has yet to demonstrate true allyship. She and her campaign made Pride about her and that is wrong.”

She goes on to state that:

“Elizabeth grandstands and says sweeping statements are damaging. ‘I love everyone’ is akin to ‘all lives matter’. It betrays the struggles and disadvantages experienced by those who are marginalized.  She does not see the oppression and discrimination experienced by our community.”

This community member has chosen to remain anonymous, in fear that they would receive backlash from ESM and her supporters. This fear is not unwarranted, as is seen in the photo below when a community member asked: “Elizabeth, do you support the province implementing a vaccine passport?” To which her son (and apparent campaign manager) responded:

I understand people make mistakes; all of us, as humans, are bound to do so. The issue is that ESM has never owned up to these mistakes, despite having many opportunities to do so. And there has never been a public apology or any form of acknowledgement of the harm she has caused. Meanwhile, ESM continues to exploit the queer community for her own benefit, as was seen by her actions at the Cumberland Pride Rally.

Pride has always been an open, inclusive, and welcoming event for all who support the liberation of the queer community. Organizers are right to call out ESM’s crass opportunism and to hold her to account for her past and ongoing harmful actions towards the community.