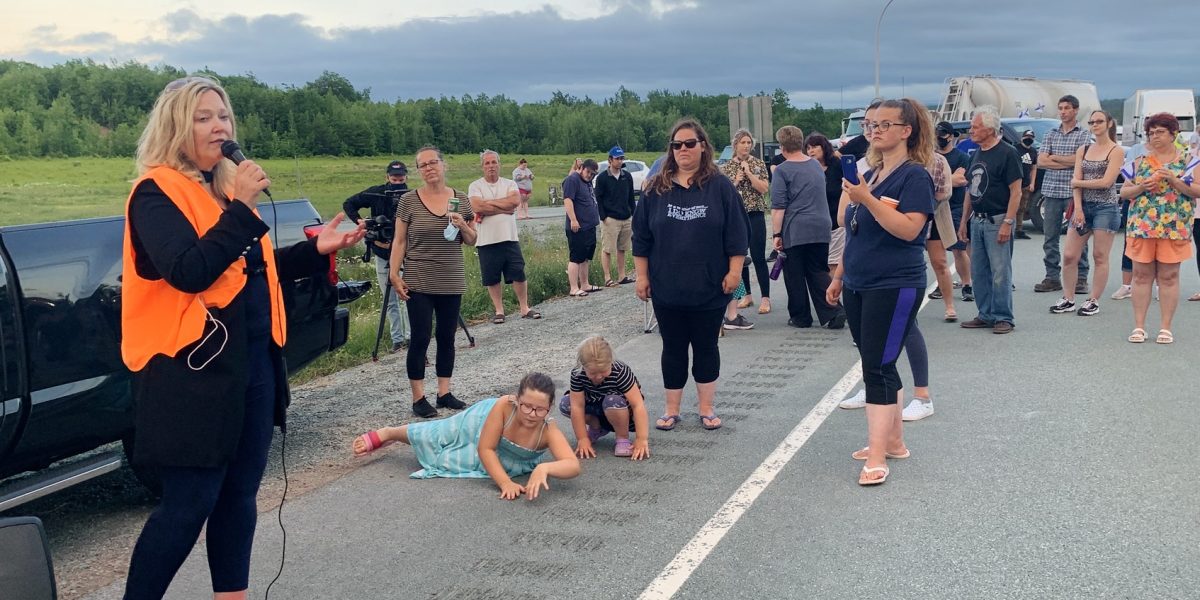 Elizabeth Smith-McCrossin, a now independent MLA, has become the voice of the reactionary right in Nova Scotia and she is using this platform to whip up hate and anti-vax sentiment.

McCrossin, a former Conservative MLA in Cumberland County, one of the poorest counties in the poorest province in the nation, has been in the news recently. This is due to a blockade she incited. On June 22 Iain Rankin, current Liberal Premier of Nova Scotia, announced hours before the border was to open that he had changed his mind.  The border between Nova Scotia and New Brunswick would remain closed and COVID isolation requirements would continue.

Like many other Nova Scotians I was disappointed, and frankly, furious. Rankin had plenty of time to announce these changes but waited until the last second to do so. McCrossin, using the anger and disappointment of her constituents, called for a road blockade.

Indeed, before darkness fell that evening McCrossin had a hoard of angry residents blocking the TransCanada highway. Shortly, the blockade moved to the border itself.

More folks joined in, bringing beers, boxing gloves, and then anti-vax signs. What started off as a protest against border closures soon spiralled into a full-on anti-vax protest. With one protester calling the vaccine “poison”. The next day we saw protestors blocking a truck that they thought were full of vaccines, once they learned that it was filled with blood they let it through.

It is clear that many of these protestors were looking to block vaccines from getting into the arms of people who so desperately needed them. And where was McCrossin during all of this? This was the protest she had started and yet she was nowhere to be found. McCrossin ended up in Halifax, waiting for Premiere Rankin at his office.

This was political grandstanding. McCrossin knew that Rankin would not be at his office, as it was public knowledge that he was on a pre-election tour. McCrossin sat, barefoot, waiting for a person who she knew would never show up while arrests were being made at the Nova Scotia/New Brunswick border.

Not only did McCrossin call for a highway blockade and then abandon her supporters, but she did this only a year after she expressed her anger towards rail and road blockades in support of Wet’suwet’en.

It is clear that for McCrossin road blockades are only allowed when they suit her needs and fit her reactionary worldview.

McCrossin showed her hypocrisy this past few weeks and then soon lost her seat as Conservative MLA when Tim Houston, leader of the Nova Scotia Conservatives, kicked her to the curb. Undeterred, she announced yesterday that she is running as an independent.

McCrossin has shown on multiple occasions that she does not support the queer community; with her refusal to hang a pride flag in her place of business and then misgendering a trans youth despite being told repeatedly their correct pronouns. Her complete disregard for the queer community shows through her actions.

Then there are her racist remarks. Prior to the legalization of marijuana McCrossin had stated that she did not want it legalized because it would “Make Nova Scotians unproductive (lazy) like Jamaicans”. Then there are racist comments she made towards a former employee, who is a Black woman. The list goes on and on.

Just when you thought it couldn’t get worse McCrossin has been subject to a human rights complaint by an employee. Tell me again how she supports the working class of Cumberland County?

Indeed, this employee was treated so poorly she had to take mental health leave and was then criticized by McCrossin for it. The situation got so bad the employee admitted she was suicidal. This employee faced discrimination, harassment, racism, and classism. Elizabeth completely disrespected this woman and her basic human rights. Those vocally defending McCrossin are quick to ignore her long and troubling record as public official.

Elizabeth Smith McCrossin has only worked to create divides within the County of Cumberland and across Nova Scotia. She has proven time and time again that she does not care about the well-being of employees, of the queer community, or the rights and wellbeing of Black, Indigenous and People of Colour (BIPOC) folks.

Supporting McCrossin means not supporting the rights of workers, queer people, or BIPOC folks. You cannot stand in solidarity with workers and the oppressed when you support people in power who perpetuate the very violence you supposedly stand against. And her being a woman isn’t “girl power” or “girl boss energy” – it is bigotry hidden behind white feminism.