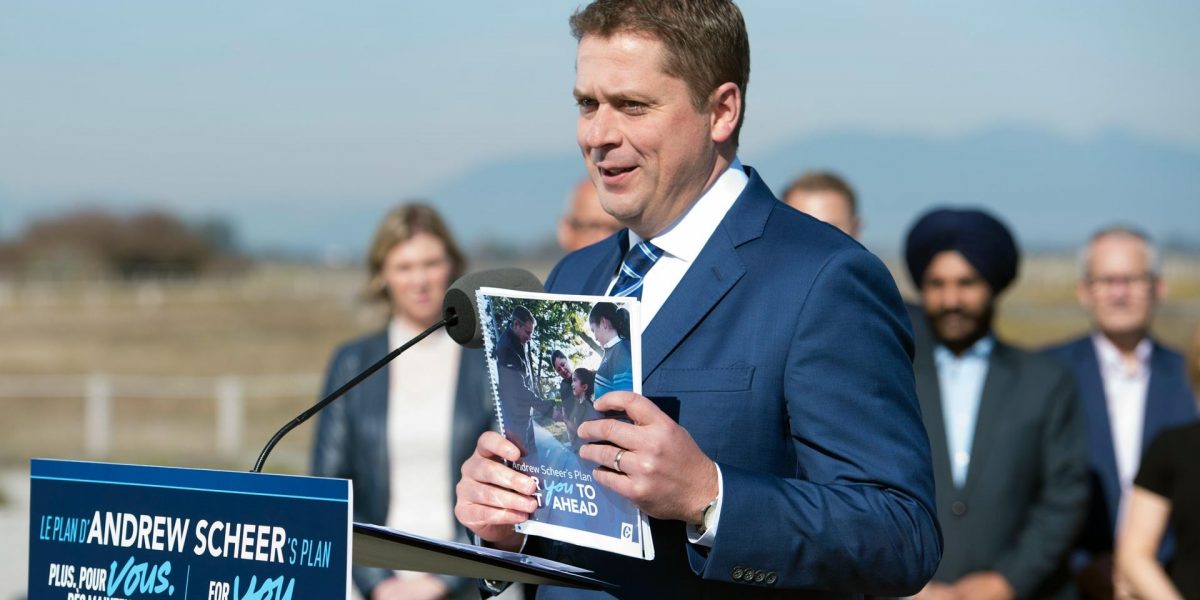 As the federal election heads into its last week the poll numbers which had been static all campaign have finally started to move. The NDP and Jagmeet Singh after several strong weeks of campaigning on strengthening public services, taxing the rich, addressing climate change and reconciliation has started to see its support tick up to 19%, leaving the Greens at 9%. Beset by a series of scandals and controversies, neither the Liberals nor the Conservatives have been able to breakout of their polling deadlock at 32%. The Bloc, on the other hand, has been surging in Quebec, which could throw open the door to a minority government.

The English and French debates further exposed Trudeau’s empty progressive rhetoric on reconciliation, climate change and inequality. Trudeau spent most of the debate either defending his record of coming up short on key promises, or fear mongering about the prospect of a Conservative government.

Just as Trudeau struggled, Scheer was also on the defensive for his stance on social issues, his support of the fossil fuel industry and his commitment to pursuing austerity politics. As much as Scheer tries to present an image as a non-threatening Conservative, his campaign has pushed racist anti-immigration rhetoric and criminalization. Maxime Bernier took full advantage of the debate platform the media gave him to spew his anti-immigrant and racist hate, dominating the whole first part of the debate.

Clearly worried about Bernier on his right flank and the Bloc, Scheer, days after the debate, was at Roxham Road in Quebec announcing that he would crackdown on migrants crossing the border. “We want to make sure that when people come into Canada, we are putting the safety and security of Canadians first. That is paramount,” said Scheer, envoking the spectre of violent crime and foreigners copied from Trump’s playbook.

Singh’s confidence and clarity in the debates was the reflection of the NDP campaign that over the last two weeks had begun to unambiguously articulate a vision for stronger public services, reconciliation, climate justice and tackling inequality. After campaigning in Grassy Narrows and talking about the need for clean drinking water for Indigenous communities, Singh was able to amplify the call for clean drinking water and real reconciliation. Throughout the debate Singh was also able to effectively polarize on questions of class.

But make no mistake, the NDP’s momentum in this campaign did not start with Singh’s good debate performance. The real game changer in this election was the massive climate strike, which saw record numbers of people take to the streets demanding climate justice. This massive wave of protests changed the narrative of the campaign and exposed both Scheer and Trudeau.

The NDP began the campaign struggling for third place with the Greens, with the political establishment writing off Singh as unelectable, especially in Quebec. But the mass climate strikes, especially in Quebec, shifted the terrain in the lead up to the debates. This, combined with Singh’s progressive campaigning, have revived the NDP.

The NDP and the Tories released their costed platforms last week. The Conservative platform was released on Friday to garner as little media attention as possible. Scheer, it turns out, is running on enacting major cuts. As the Globe and Mail put it:  “The Conservatives are promising to deliver billions in tax cuts and a balanced budget in five years by reducing spending by more than $53 Billion in areas such as infrastructure and government programs.” The price of a Conservative government is clear: more cuts to public services and more tax giveaways to the wealthy.

The NDP also released its fully costed-platform this week. Curiously the Parliamentary Budget Office took the NDP to task because its proposed tax measures are “unrealistic” because the rich will simply evade taxes. The PBO’s non-partisan assessment reflects a deeply ingrained ideological position within Canada’s political establishment, that raising taxes on the rich and corporations is just not “realistic”.

Another set of numbers were released this week, the September job numbers. Canada added  54,000 jobs in September, driven by gains in full-time work. Year-over-year employment has grown by 456,000, wages and total hours of work are also up. This seems like good news for the Liberals, but beneath the job numbers lies real anxiety over the economy. Over the last several years wages for top-end earners and management have been increasing, but for most other workers this is not the case (except for the lowest paid workers, who have seen increases thanks to Fight for $15 and Fairness campaigns). So while the job numbers appear good, the economy is far from working for working people and all signs point to real economic turmoil ahead. Thus, as Joseph Choonara put it:

In this context, a key question is whether workers will be willing to pay the price for the failures of the system, through renewed austerity, further squeezes on pay and conditions, and rising unemployment. Millions of young people and workers are already questioning the ability of capitalism to prevent ecological catastrophe. They may be about to witness another aspect of the barbarity of the system.

The Turkish attack on the Kurds of northern Syria this week barely registered on the campaign trail. Every party registered a note of condemnation over Turkey’s actions, but the limited airtime this was given speaks to the almost non-existence of foreign policy in the election.

Turkey is a NATO ally and Canada has been knee-deep in the Middle East, either through direct military intervention or material support. Another Canadian ally, Saudi Arabia is involved in a brutal war in Yemen and Canada is supplying arms. After a major attack on a Saudi oil refinery in late September, it looks like the war is not going so well for Saudi Arabia. The Saudis have been relying on Sudanese troops to help  fight the war in Yemen. It turns out Dickens & Madson, a Canadian consultancy company, was recently hired by Lieutenant General Mohamed Hamdan Dagalo to help the TMC win US funding for more arms for the military. Canada’s interest in Sudan goes beyond geopolitical support for Saudi Arabia as ORCA gold, a Canadian mining company has a significant operation that could be jeopardized by further popular uprisings. Canada’s role in the Middle East of supporting reactionary regimes like the Saudis and Israel is only adding to the instability in the region that has been on a knife’s edge over the oil tanker attacks in the Gulf of Oman in June.

Ignoring foreign policy issues because they are messy fails to grasp that there is a direct link between fighting racism, austerity and Islamophobia at home with pushing an agenda of peace and non-intervention abroad. If the NDP and the wider left want to take on racism, colonialism and austerity at home, then this requires to take on the foreign policy establishment’s positions of militarism and intervention abroad.

The ballot box and the streets

In the last week there will be pressure on the NDP to reduce their sights to Parliamentary maneuvers. The NDP outlined its six key priorities for propping up a minority government: housing, waving interest on student loans, reducing cellphone bills, a wealth tax, reducing carbon emissions and just transition for workers and a universal national pharmacare and dental care plan. Singh, in a short-sighted move, did not mention opposition the trans mountain pipeline as one of the key priorities. Dropping a key demand of the climate justice movement in order to support an increasingly unpopular Prime Minister could lead to support sliding to the Greens. What have carried the NDP so far is echoing the movements, and they should continue this up to election day and beyond.

While it is good for the NDP to openly outline key areas it would push a potential Liberal minority, Singh and the NDP’s recent openness to being in a coalition with the Liberals is a strategic miscalculation. While it might temporarily allay fears in Liberal NDP swing ridings, a formal coalition government would likely impede the ability of the NDP to critique the Liberals. It will also saddle the NDP with the inevitable Liberal scandals and broken promises that come with the Liberals in government. By pressuring the Liberals without entering a coalition the NDP is likely to wrench out more concessions with fewer compromises.