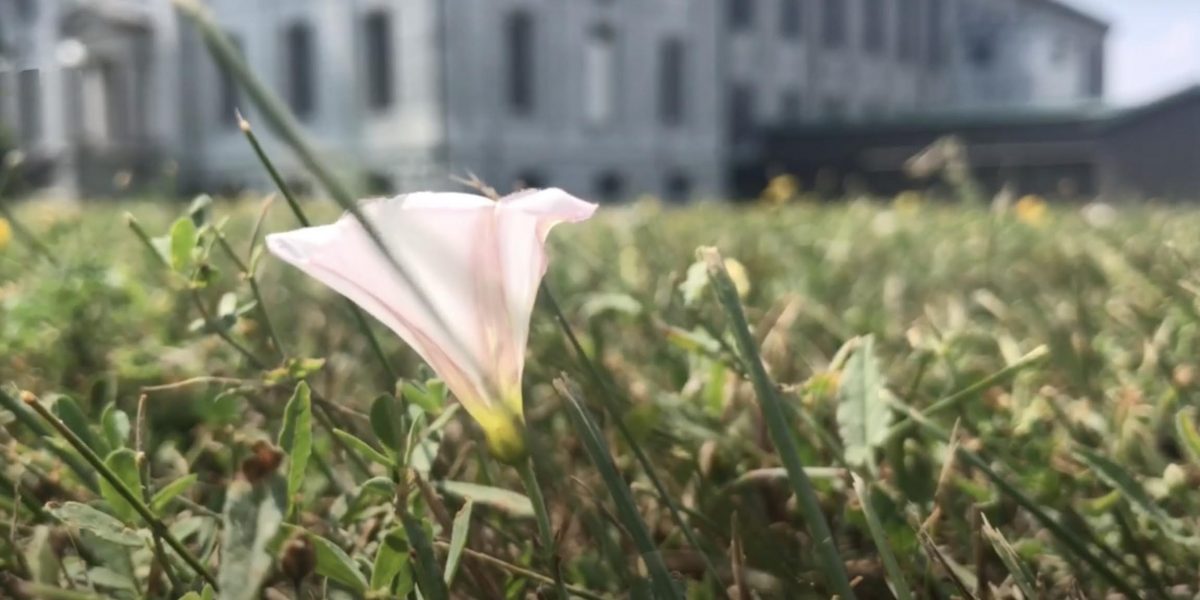 The administration of heritage and development in Kingston contributes to the broader Canadian project of erasing the lives of criminalized people and advancing the logic of settler-colonialism. The commercial redevelopment of the Prison for Women (P4W) in Kingston/Katarokwi, Ontario is one important example. Without a full reckoning with the lives and deaths of prisoners, we risk substituting history for heritage, turning a site of memory and resistance into just another limestone building on prime real estate.

All politics are local. Decisions made in a small municipal committee meeting can have a long-standing impact on the landscape of a place, including the public’s capacity to remember its own history. For this reason, it is important to pay attention to the details of what might otherwise seem like just another committee decision-making process in a small Ontario city.

In a meeting of the Heritage Committee of the City of Kingston, last September, Andrea Gummo the Manager of City Planning, discussed the importance of recognizing the value of both the material and “intangible resources” of heritage sites when assessing developers’ requests to make changes to local “properties,” which include sites of confinement. Gummo’s statement was followed by a presentation by Mike Keene, a designer for Siderius Developments, who laid out a planning rationale and community improvement plan for the shuttered P4W.

Keene’s presentation was based on a  September 2018 report prepared by Fotenn Planning + Design for Siderius Developments Inc. in support of an application for a Brownfields Community Improvement Plan (CIP) (2017) amendment. This amendment includes the property known as “40 Sir John A MacDonald Boulevard” ( the P4W) as a new Community Improvement Plan Area (CIPA). Designation as a CIPA means the developer could receive significant financial assistance from the City, up to $20,000, to fund environmental studies of potentially contaminated properties prior to development. This access to public funds no doubt motivates the developer’s attempt to demonstrate a commitment to “community improvement” as it is understood and recognized by the municipality.

Throughout his corporate presentation, Keene ignored the concept of “intangible resources” such as the social history of P4W as a place where women from across Canada lived and died.  Instead, he spoke only to the dominant conception of “heritage values” rooted in colonial notions of property, use-value, and civility. The Fotenn Report relies on a number of settler-colonial assumptions that erase and devalue the generations of prisoners whose lives are entangled with this site. It is an example of how violent tools of colonial conquest remain essential ingredients for the everyday workings of property and capital.

The planning rationale laid out in the Fotenn Report outlines how the designer believes development of the property will benefit “the community.” More precisely, it shows what they believe city staff will recognize as fulfilling the priorities, principles and considerations that sufficiently benefit the community, keeping Siderius eligible for further financial assistance under the CIP and Brownfield Program.

As the report’s rationale claims, this monetary assistance would “aid in setting the tone for the collaborative redevelopment of the site.” But the relevant experts on the history of P4W – namely, the community of people who have been imprisoned there – have been shut out of this collaboration, in spite of repeated attempts to meet with representatives of Siderius. This exclusion sets a distinctly colonial tone for a form of “collaborative redevelopment” that erases the social history of a place in the name of protecting its “heritage value” and improving the market value of a “vacant and unused” site that might otherwise go to waste.

The report’s statement that “for eighteen years the property has remained vacant and unused,” is simply untrue. Since 2000, the year the prison was decommissioned, Fran Chaisson, an Ojibwe woman who was imprisoned at P4W, has dedicated herself to hosting annual gatherings to honour women who died on its grounds. These healing circles, which occur annually on Prisoners’ Justice Day, August 10, follow Indigenous protocol to support healing from, and resilience to, colonial violence as it is deeply intertwined with carceral power and capitalism. They are powerful gatherings for people who are living with the wounds of carceral experience and with the grief of having lost loved ones to colonial violence.

Hundreds of people with prison experience have gathered with their accomplices, family and supporters on the lands of the former prison, under the shade of the Black Spruce, to speak the names of those whose lives were lost and to foster their connections with one another. Throughout the year, women visit the site to remember, pay respects, and offer prayers and tobacco for their “fallen sisters.”

The site of P4W is active and alive with the spirits of its survivors. According to the Canadian Commission for United Nations Educational, Scientific and Cultural Organization (UNESCO), Intangible Cultural Heritage (ICH) includes (but is not limited to) oral traditions and expression (including storytelling and song), social practices, rituals, events and ceremony, . These are all activities which flourish on and in relation to the site of P4W, but are never mentioned in the developer’s rationale.

It is a predictable strategy of colonial storytelling to feign ignorance of the active life of a place and the ongoing struggle of communities to keep this place alive. The P4W Memorial Collective, a group of women who were imprisoned at the Prison for Women and their abolitionist accomplices, has been working to create a memorial garden on the grounds of P4W since long before the site was acquired by Siderius. The purpose of the garden is to commemorate the women who died within its walls and to honour people who continue to fight for their lives in prisons and jails across the country. This community is uniquely qualified to represent the valuable “Intangible Cultural Heritage” of the site, yet the Fotenn Report proposes their erasure.

Instead, the report focuses on the designation of the P4W property as a heritage site according to the Ontario Heritage Act, which acknowledges its possession of “cultural heritage value  in all three categories: physical/design value, historical associative value, and contextual value.” The absence of any mention of intangible cultural heritage considerations reveals the emptiness of heritage designation rubrics and their exclusion of certain communities from consideration. For example, “physical/design value” is represented by elements of “interior heritage attributes” which are no longer “functional” and now have value as objects for “display in the Prison Museum or integration in the Kingston Penitentiary tours”. In other words, the elements of the site that reference its history as a place of confinement are now made useful to the tourism economy, again without the consultation or collaboration of the relevant experts: people who have done time in prison.

Instead of situating the material history of Kingston Penitentiary or P4W in relation to the living memory of those who were incarcerated in these institutions, the Fotenn Report (in accordance with the Ontario Heritage Act) measures the value of these “heritage elements” as objects of learning and fascination to a community who engages in carceral tourism. Nowhere does the report refer to another community of people who have direct experience of these architectural elements as material parts of the apparatus that has held their bodies captive and played a direct role in taking the spiritual, psychological, and corporeal lives of people they love.

This paints a sickening picture of what “a cultural heritage landscape of prison life within Kingston” means to the developer. How can the “view,” inaccessible to those who experienced “prison life” most brutally and intimately from within the walls of the prison, be associated with the “cultural heritage” of this “landscape”? The Fotenn Report’s interpretation of “contextual values” only makes sense if prisoners are erased from cultural heritage, and from the site itself, like so much toxic soil that also, according to the Report, must be eradicated from the yard of the former prison to make it suitable for public use.

The multiple references in the Report to the rehabilitation of “environmentally compromised land” and “the remediation of soils or groundwater” on the grounds of P4W, given that the “vacant, contaminated lands may present health and safety issues to the public” points yet again to the absence of former prisoners from the developer’s conception of “the public” or “the community.” If the lands pose a potential health hazard now, with no recent activities involving industry, dumping, or other forms of contamination, then does this not mean that people who once regularly played baseball, jogged, gardened and visited with family in the prison yard did so on contaminated soil?

The persistent calls in the report for financial assistance to assess and clean the site as an act of community improvement exposes the prison as a site unfit for human inhabitation. The only way that one could tolerate the confinement of thousands of people in this building for over 66 years when it does not meet “minimum occupancy standards” is if one does not apply the same standards to their well-being as one does other members of the public. Occupancy standards are only up for consideration now that there is a proposal to transform the grounds and building into a site of profit for developers.

According to the Fotenn Report, the site is contaminated, indeed “stigmatized… due to the challenging history surrounding the experiences and events which took place within the Prison for Women.” The developer’s solution to the site’s stigma is to remove contaminants–erase all witnesses and tangible or intangible evidence of the prison’s “challenging history.”

For these reasons, the Fotenn Report amounts to a proposal to cleanse Canadian history of a “challenging” carceral-colonial past and present by focusing on a very limited conception of heritage protection while refusing to acknowledge the importance of Intangible Cultural Heritage. According to the Canadian Commission for UNESCO, Intangible Cultural Heritage is important because of its role in the promotion of “tolerance, peace and reconciliation; fostering community and individual well-being; [and] promoting human rights and sustainable development.”

Community members who hold first-hand knowledge of P4W and actively continue to share their experiences inside the prison, passing on the memories of those who died within the prison system, have been making their presence known and actively seeking the support of the City of Kingston, the Heritage Committee, and the developer to share their valuable cultural knowledge with the broader public. However, they have been largely excluded from the conversation about what heritage means and how to protect it.

This erasure seeks to deny us the opportunity to understand the greater systemic inequities and oppressions of the Canadian state. The attempt to erase these memories and lives, or so-called “intangibles,” is part of the Canadian state’s denial of its historical investment in the violence of the carceral industrial complex and its ongoing role in colonial oppression.

You can visit the P4W Memorial Collective website here: http://www.p4wmemorialcollective.com/