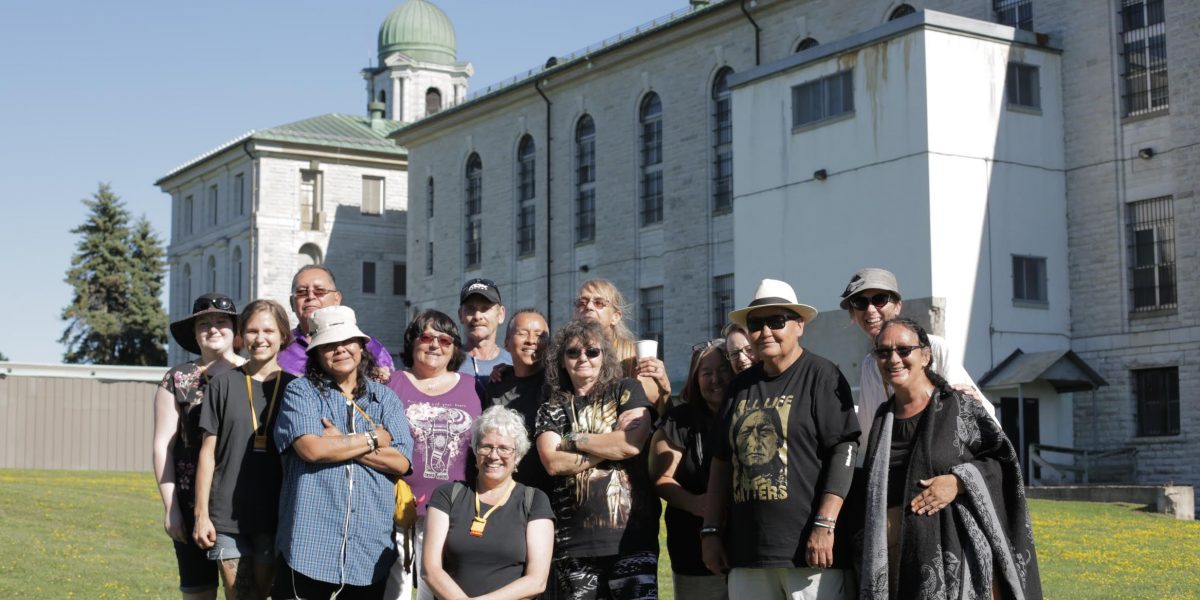 “The burgeoning prison industry is an obscene monument to the failure of social justice in Canada.” – Gayle K. Horii

If the Canadian prison system is a monument to the failure of social justice, then where are our monuments to what Horii calls “the ART in survival”: the creative, beautiful, and life-affirming community practices of people in prison? To answer this question, we must take prisoners seriously as writers, artists, theoreticians, and revolutionaries.

For decades, people imprisoned in women’s carceral institutions have analyzed the conditions of their captivity at the Prison for Women (P4W) in Kingston, Ontario. These insights were transmitted back and forth across the prison walls through prisoner participation in various commissions and studies. But their primary mode of circulation was through the prisoners’ own community practice, including song and ceremony, personal collections of photographs, letters, and art, and the prisoner publication, Tightwire.

These forms of collective memory enliven the practices of care, friendship, and love that continue to shape the P4W sisterhood from the present into the future. The sisterhood swells against the boundaries of carceral-colonial space-time to interrupt the data-driven narratives of both corrections and mainstream prisoner advocacy. While the Canadian government funds report after report on the state of people imprisoned in women’s carceral institutions in Canada and the need for gendered and ‘culturally’ sensitive incarceration, current and former prisoners are busy inventing beautiful ways to live.

The community praxis of people imprisoned in women’s carceral institutions attests to the twin forces of creativity and beauty that shape these people’s survival in the face of the torture and trauma of prison, and its haunting aftereffects, including parole, social services, and police. In her editorial for the 1994 special issue on women’s prisons of The Journal of Prisoners on Prisons, Gayle K. Horii notes that:

“surviving in the underworld of prisons is just that – an ART in survival… [T]he absence of aesthetic pleasures debilitates sensitivities and threatens death. The slightest awareness of beauty brings an assuage in form – breath. In this world of decay and corruption, we find beauty where we can and we make beauty to live”.

Horii’s insight – that surviving prison is an art – is an invitation to pay attention to the creative practices of prisoners as a powerful force for survival, resistance and abolition.

It also raises the question of how to remember these creative practices through public monuments. This is not an abstract question. In 2018, P4W was purchased by Siderius Developments Ltd., an Odessa-based real estate developer who intends to develop the former prison grounds and building into a mixture of green, commercial and residential space.

The P4W Memorial Collective, a group of women who were imprisoned at the P4W and their abolitionist accomplices, has been pushing the site’s owner towards the creation of a public memorial garden, gallery and community space. This would honour the people who lost their lives in P4W, and hold space for people who continue to fight for their lives in prisons and jails across the country.

The P4W Memorial Collective works to remember in opposition to the systemic, cyclical, and institutional forgetting that enables the expansion of structures of domination and carcerality. One way we remember is by gathering annually at the site of the P4W on August 10 to commemorate Prisoners’ Justice Day (PJD). At the gathering, we participate in a Healing Circle, where we sing the Strong Woman Song. Fran Chaisson, an Ojibwe woman, keeper of the Two-Spirit big drum, and founding member of the P4W Memorial Collective who was released from P4W in 1989, remembers that Bobbi Woods from South Dakota gifted the Strong Woman Song to the people at P4W in 1973 for healing purposes as an honour song for hope.

To sing the Strong Woman song is to continue to honour the people who were imprisoned at P4W and those currently held captive in women’s prisons and jails across Turtle Island, as well as to mourn those who died in P4W and other carceral institutions across Canada. To sing the Strong Woman song is also to remember and mourn those who died in P4W, especially the seven people who died by suicide in P4W between 1988 and 1991 (six of whom were Indigenous), and all persons who have died in prisons across Canada. The Strong Woman Song is a living memory; it mourns and honours the dead while embodying a relentless fight for the liberation of the living and future generations.

The annual gathering at the site of the P4W, and the singing of the Strong Woman Song, constitute a way of living and remembering that refuses settler-colonial logics of memory and monument. Where settler-colonial monuments foreclose possibilities of remembering and honouring resistance and justice, abolitionist monuments such as the PJD gathering and the Strong Woman Song transmit the art of survival from the past into the present and the future. The curation of a memorial garden at the site of the former prison recognizes the cultural, historical, and political significance of such ongoing memory work of the people who were imprisoned at P4W.

As abolitionist organizer, educator, and writer Mariame Kaba has said, harms engender needs (for the survivors of harm, and communities involved), and those needs must be met. The women who survived P4W have needs as a result of the harms they suffered. They have made known the need for a space to gather and honor their fallen sisters at the place where they died, and to hold ceremony. They have vocalized the need to be in control of the design and location of the memorial garden, in collaboration with the city and developer.

As a community, it is our responsibility to stand in solidarity until their needs are met, and our own communal need to live in community without criminalization and punishment is realized. Meeting these needs is part of what it means to be living in a community with formerly and currently imprisoned people.

You can visit the P4W Memorial Collective website here: http://www.p4wmemorialcollective.com/