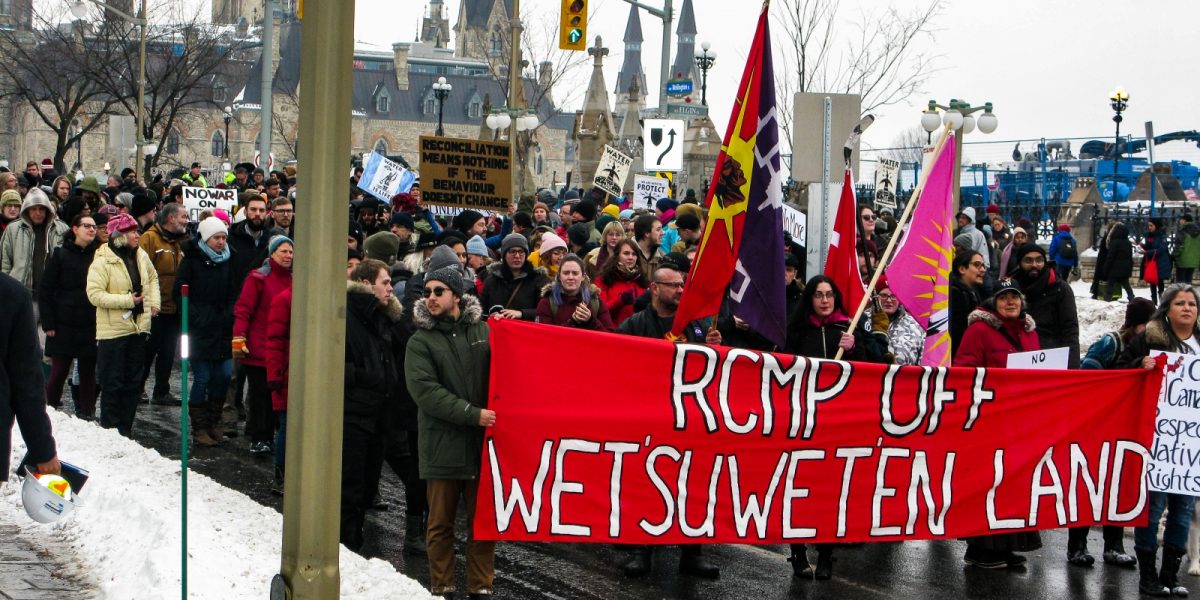 Pressure on the ruling class is mounting to address a number of huge crises: the COVID-19 pandemic, the climate crisis and and the economic crisis, and the militant response to anti-Black racism. We see demands to divest from and eliminate the fossil fuel sector and to defund and abolish the police. It is not surprising that these demands are happening at the same time. Some argue that we simply need to bailout our failing industries or reform policing practices, but these institutions are so entwined with supporting the oppressive system that created them that they simply cannot adequately address the changes we need.

This period during the COVID-19 pandemic has seen interesting climate developments, some caused by state response to the pandemic and others by the decades of accelerated use of fossil fuels. By March, people in particularly polluted environments were grateful that they could actually see the blue sky because lockdowns had significantly reduced the use of vehicles. It has been estimated that carbon emissions were reduced by at least 7% in the first few months of the pandemic.

As lockdowns are ending in many areas of the world, and economies are trying to resume ‘business as usual,’ emissions are back up. On top of that, the cumulative impact of emissions means that Siberia witnessed a sustained spring with 100 degree Fahrenheit temperatures and climate scientists estimate that we are in for another record-breaking hot summer. In fact, the current level of atmospheric carbon dioxide concentration is now at 416.08 ppm. The annual rate of increase of the last 60 years is around 100 faster than previous natural rates of increase, like those which occurred during the last ice age.

In response, the environmental movement, including Just Recovery for all, demands complete divestment from the fossil fuel sector, and the use of government funds to ensure a just transition for all to a carbon-free economy. This includes long-standing demands from Indigenous land and water defenders. We acknowledge that the best defence of the planet is being led, and is best led, by Indigenous peoples. These are the very people who have faced systemic racism by the state for well over five centuries.

At the beginning of this year,  Wet’suwet’en land defenders rallied the support of thousands across Turtle Island in their efforts to stop the Coastal GasLink pipeline from traversing their territory. The RCMP raided Wet’suwet’en territory and arrested 22 land and water defenders. It was NDP Minister of Public Safety and Solicitor General, Mike Farnworth, who deployed the RCMP. The state action was a continuation of the RCMP’s historic and current role in aiding the dispossession of Indigenous peoples and ignoring their laws. It was also a continuation of the betrayal of the NDP to support Indigenous sovereignty in any meaningful way beyond rhetoric.

More recently, we saw the disgusting display of police violence, beating Chief Allan Adams of the Athabasca Chipewyan First Nation–whose nation is in the heart of the tar sands, and which has spoken out against environmental racism. Simon Seguin, the RCMP officer seen on film tackling, punching, and choking Chief Adams, remains on duty. An RCMP code of conduct hearing gave Seguin a one-day suspension and a letter of reprimand. This shows the police have no shame and no qualms about continuing to beat Black, Indigenous and racialized people even though the anti-police sentiment is growing world-wide and especially here on Turtle Island.

There is no better example of inequality than to see the over-protection of the rich and of police forces themselves (with ever increasing budgets) and the under-protection of Indigenous communities and other communities of colour. Over the decades, thousands of Indigenous women have gone murdered or missing, including many at the hands of police and RCMP who, in any case, refused to investigate these cases seriously if at all.

For many, the police are seen as hypothetical problem solvers, the one force we can call when no other option will do. This is an incredibly false, problematic, and simplified view greatly due to the mediafication of ‘copaganda,’ a proliferation of media that puts policing in a lens where they are noble, overcome circumstances, and serve and protect citizens from copious amounts of ne’er-do-wells. In the day to day lives of those who most adopt this view, policing doesn’t play much of a role, if any. The police are seen as an almost invisible solution to a problem that could potentially arise. In reality, the police rarely prevent dangerous and fatal situations from happening. Rather, policing is used as an activity to both reinforce capitalist modes of production and oppression, and to act as a threat of violence or jail when communities seek to operate outside of these states.

As noted by Maryam Hammad, “The high rates of criminalization among Black and Indigenous peoples are not only statistical facts; the systematic criminalization of Black and Indigenous populations alienates already vulnerable people further from the mainstream and undergirds discriminatory attitudes used against these communities in the media and everyday life.” In the same article, Hammad found that the RCMP has the highest rate of fatal shootings amongst policing institutions, with over one third of those involved in RCMP shootings being indigenous.

They also found that “[a] Black Torontonian was roughly 20 times more likely to be shot by the Toronto Police Service than a white person between 2013 and 2017. Black Torontonians were involved with 28.8% of force cases, 36% of shootings, 61.5% of deadly encounters, and 70% of fatal shootings in spite of being only 8.8% of the city’s population in this period.” It is very clear that policing in Canada and abroad is deeply rooted in colonial violence and oppression, protecting corporations that pollute and destroy bodies and territories.

Reducing carbon emissions requires a just transition for high-carbon workers, and improving the wages and conditions of existing low-carbon jobs. But many of these workers in essential low-carbon jobs are denied  essential workplace protections and also over-policed in their communities–from personal support workers to migrant farm workers. Migrant workers around the world are forced to leave their communities due to political, economic, and environmental disruptions, and often face xenophobia and poor working conditions when arriving in a new country. These oppressive practices are ingrained within capitalism in order to protect the rate of profit and capital’s structures. This also speaks more broadly to how policing “engages” with specific communities.

It is no wonder that “moving the money” away from the hands of destructive corporations and state and police agencies has become a central demand for movements aspiring to a better world, where people come before profits.

First Nations and environmental movements around the world have for years challenged financial institutions to divest from fossil fuel companies, with some success in European sovereign funds for example. Related demands are to ensure justice for workers and communities, especially Indigenous communities, in a new economy that would be fair, democratic, accountable and environmentally sustainable, with decent work for all.

For example, the Migrant Rights Network continues to make clear links between safer work and status for all with the fight against racism and colonialism. Black Lives Matter – Canada has also made the links clear between colonialism, anti-Black racism, and environmental destruction. Their demands include “An acknowledgement and public apology from the federal government for their complicity in the continued over policing and intentional, increased incarceration of Black and Indigenous communities in Toronto.” And “Canada must end racist, anti-refugee, anti-Black, Islamophobic exclusion of migrants and refugees within this colonial border.” Indigenous Climate Action has come out in support of the Black Lives Matter movement. “We understand that the struggles of Black, Indigenous, migrant, poor, and all other oppressed people – each exacerbated by the present pandemic and economic and ecological crises – are fundamentally connected. These are life-affirming struggles against colonial and capitalist systems of hierarchy and domination.”

The movement to abolish the police, a decades-old but small campaign, has been in ascendance since public reaction to the Minneapolis police murder of George Floyd. While the most common demand is to defund the police, this is often accompanied by demands to disarm and abolish police departments (e.g. Black Lives Matter Toronto is calling for an immediate reduction to the Toronto police budget of 50%, with a view to complete abolition). The newly available funds could then be directed to the services communities identify as most important, for example in housing, education, health and social services.

The alternatives of decent, climate-sustaining work and communities being resourced to allow local strengths to grow, point to a world where we can really care for each other. This requires taking on the fossil sector (both corporate and state), and state institutions, especially the police. Capitalism relies heavily on both the fossil economy and police repression. Only a strategy that builds the confidence of workers and communities to fight against all the exploitation and oppression of capitalism can win. Let’s keep linking our struggles so we can divest from fossil fuels, defund the police, and demolish capitalism once and for all.