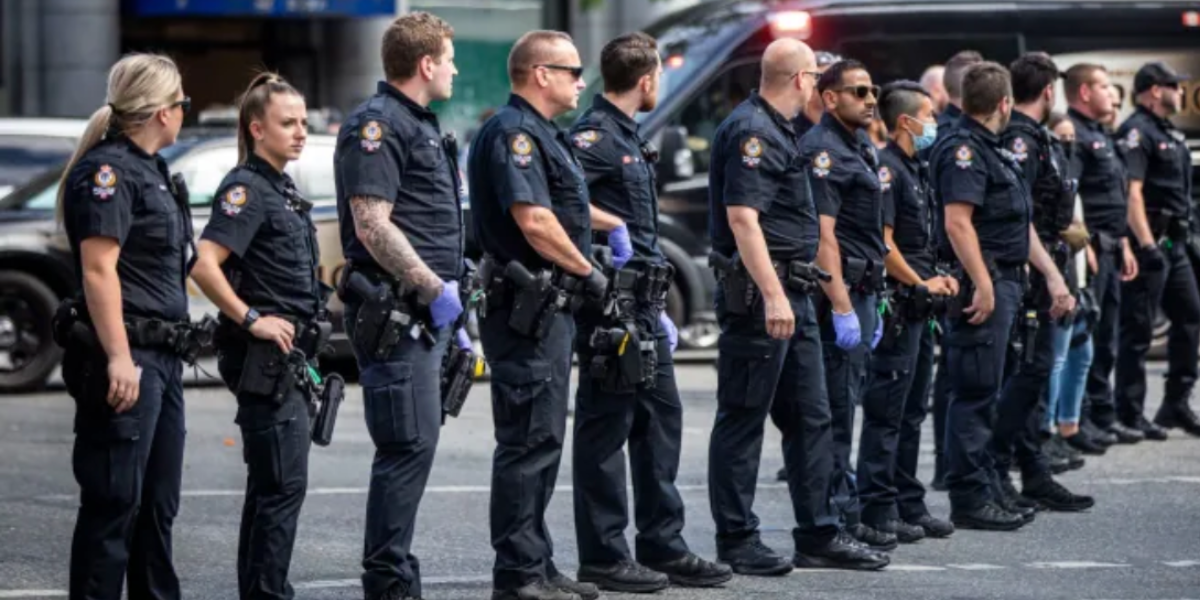 During the first week of November, the Vancouver Police Department (VPD) once again bumbled clumsily into the world of politics with a social safety net report. Produced by neoliberal Alberta-based tech company HelpSeeker Technologies, it tried to cast shade on social services agencies—and by association the people who access those services—in Vancouver’s Downtown Eastside (DTES), one of the country’s poorest neighborhoods. Entitled, Vancouver’s Social Safety Net: Rebuilding the Broken, the report made headlines with its sensationalist claim that $5.1 billion was being spent in the DTES with no discernible impact on homelessness, overdoses, or poverty.

While the document became the subject of widespread discussion and condemnation, and a deluge of criticism was leveled at the obvious cynicism and deception of the report, and its methodological corruption, there has been less discussion of the possible motives behind police pushing this piece of overt copaganda (police propaganda).

The larger issue is not police stupidity or dishonesty (though policing is well equipped with both). The issue is what social forces are at play here. Why are they using a discreditable pseudo report to thinly disguise an attack on impoverished communities? Why are they trying to undermine already under-resourced social service providers. What are they trying to achieve here?

Much of the answer is in the main social impact document’s title, Igniting Transformational Systems Change Through Policing. The VPD are signalling their desire to expand layered policing programs that funnel social and community resources through policing, making them arms of policing.

Layered policing has been a favored tactic of police departments looking to expand budgets amid calls for defunding of police. It gives them opportunities to put a community face on policing programs, while also extending the reach of policing into more corners of everyday social life. It makes social and community services dependent on cooperation with police, and that cooperation can become necessary for continued funding. This is the essential context for understanding the VPD’s ideological project.

Before the full report had been leaked publicly, some journalists managed to get copies and were rather quickly able to dismantle the document’s claims—in a matter that made the VPD appear as fools. Claims in the report ranged from disingenuous to laughable.

The first significant deconstruction came in a fantastic piece from journalist Rob Shaw, the evening before the VPD hastily called a press conference once it became apparent details were leaking out. Shaw highlighted that for the “social safety net” figure, $2 billion of the $5 billion claimed is direct federal transfers that go to all residents of Vancouver. These included essential supports such as the Canada Pension Plan, Old Age Security, Employment Insurance and child tax benefits.

HelpSeeker included non-profits and charities that provide services to all of British Columbia but were counted as Vancouver-specific. Shaw highlighted the Legal Services Society, the non-profit legal aid service for all of BC. Yet, HelpSeeker included the society’s entire $105 million provincewide revenue as though this were a Vancouver specific social service. Shaw then pointed to $78 million in revenue from the Forensic Psychiatric Services Commission, included by HelpSeeker as a Vancouver social safety net expense. In reality it runs regional clinics as far away as Kamloops, Prince George, Victoria, Nanaimo and elsewhere.

All of this tells a story. The real aim here is an attack on social services and safety net funding. The VPD document is a push for further austerity politics and cuts to social spending on services other than police. As Pivot Legal Society noted in their response:

“Despite austerity measures imposed by all levels of government, the social safety net remains a collective responsibility, something that has been gained through decades of political, economic, and social struggle and advocacy. The decision of the VPD, an agency that receives more than 20% of the annual city budget, to commission this report undermines efforts to rebuild and maintain what is left of this net. This latest report is a waste of public funds.”

It should be remembered in this regard that increases to carceral spending are part of austerity politics and always have been. It is under neoliberal austerity conditions that carceral institutions and agencies have grown, in size and funding—from policing to incarceration to border security. So, the VPD report is best understood as a continuation of this, but one that takes a sharpened political approach in the context of broad mobilizations against carcerality and calls to defund or abolish carceral systems.

It was telling that in the VPD press conference, Chief Adam Palmer gave an impromptu rating of social services agencies based on the “cooperation.” While it’s not clear what he was actually getting at, the implications should be worrying: will service groups and agencies be rated, ranked, or excluded based on their cooperation in going along with layered policing?

Some have raised the alarm about an apparent politicization of policing in Vancouver. This comes on the heels of the decision by the Vancouver Police Union to endorse the right-wing ABC party and their mayoral candidate Ken Sims during the recently concluded municipal election—an election that saw Sim and his party sweep city hall.

And the political impact of the VPD report were felt almost immediately as newly minted Premier David Eby announced that the provincial government would take over a coordinated approach to overseeing issues in the Downtown Eastside. Eby added the government would take a “bottom line” approach, by which he means the province will assume responsibility for coordinating services and measuring the outcomes. This on its own could mean many things, though the language of the bottom line raises concerns about extending the costing and austerity approach that has governed social services spending under neoliberalism.

It is, however, a more specific detail provided by Eby that is cause for greatest concern regarding the role of policing and ties the government’s coordinated approach to a layered policing framework. In an interview with Global News, Eby said the coordination would include working with both the federal government and the City of Vancouver, but “also means coordinating service delivery from the Vancouver Police Department, the court system and a wide way of social service providers.” This integration of social services into carceral institutions is a hallmark of layered policing.

In practice, what happens under layered policing frameworks is that the social service side of things becomes subservient to policing. Projects come under the hierarchy of policing, if not directly under the command of policing. We see this with mental health partnerships, such as the Car programs that partner mental health practitioners with police for distress calls. We see it in school anti-gang programs. We see it in integrated programs like the SMART (Surrey Mobilization and Resiliency Table) Program in Surrey, that brings together police, corrections, social services, health care, and housing.

Further signalling that this would be a police-first carceral approach, Eby went on to target unhoused people living in encampments in the Downtown Eastside, saying the first step will be to institute “an immediate encampment plan to address the ongoing concerns with tents on East Hastings Street.” Eby then put a personal stamp on the matter, saying: “I don’t support encampments. I don’t think they are a solution to homelessness. I don’t think they are safe for people who live in them. I have seen too many fires, too many people have died in them.”

The multiple crises decimating the working class require more pro-social, rather than policing responses. As PIVOT stressed in this regard:

“While no health, social or community services organization is beyond reproach, we must acknowledge that every non-profit and charitable organization – particularly those operating in the Downtown Eastside – is contending with multiple public health emergencies, zero-vacancy rates for shelter- and pension-rate housing, soaring costs of living, and the continued legacies of settler-colonialism and displacement.”

Layered policing, and the intensified surveillance, criminalization, and repression it brings makes precarious communities even more precarious—and even more subject to violence.

In reality, policing has always been political. Policing is the primary state function within capitalism—securing and maintaining conditions for private property and labor markets and the exploitation of labor by capital. Policing enforces the dispossession, displacement, and social control on which capitalism, and its colonial expansions, are founded.

Even in more limited electoral terms, police have been politically active in pursuing their self-interests. Former VPD and current Canadian Police Association president, Tom Stamatakis noted, in response to VPD report critics: “Having said that police organizations have been engaging in research & commenting on public policy matters for many years, especially in Vancouver, actively since the 1990’s.  Not new, even if some don’t like it…”

The VPD report comes as police are seeking budget increases and assurances in a context of growing criticism and calls to defund. One significant aspect of layered policing is that it shelters police from defunding. As programs become integrated with policing, calls to defund police can threaten the social services side of programs that only exist because of the police component. Layered policing offers a sort of money laundering for police funding.

The recent social safety report serves this purpose in stoking anger towards non-police social services and community groups, while simultaneously putting pressure on governments to act—to make community and social services adjuncts of policing, or at the very least partners with police. Social and community services and organizations are portrayed as untrustworthy, wasteful, and inefficient—needing control. While stoking fears over social disorder and disorganization, police position themselves as the efficient providers of that control. Never mind that police are key upholders of the existing social system, and main consumers of city funds and resources—all while having no effect in their stated claims around reducing crime.

What is more, the VPD ploy is not a unique event. Neither is a police force partnering with a tech company to produce such a copaganda report. In fact, HelpSeeker has collaborated with police forces for such purposes on multiple other occasions. Another social impact audit conducted on behalf of the Edmonton Police Service (EPS) and Edmonton Police Commission (EPC) gained its own level of infamy and public outrage. Clearly there is money to be made preparing the ground for layered policing. Clearly police forces have money to burn. Look into your own local police force and see if they’re among the ones who have turned to HelpSeeker to push the layered policing agenda.