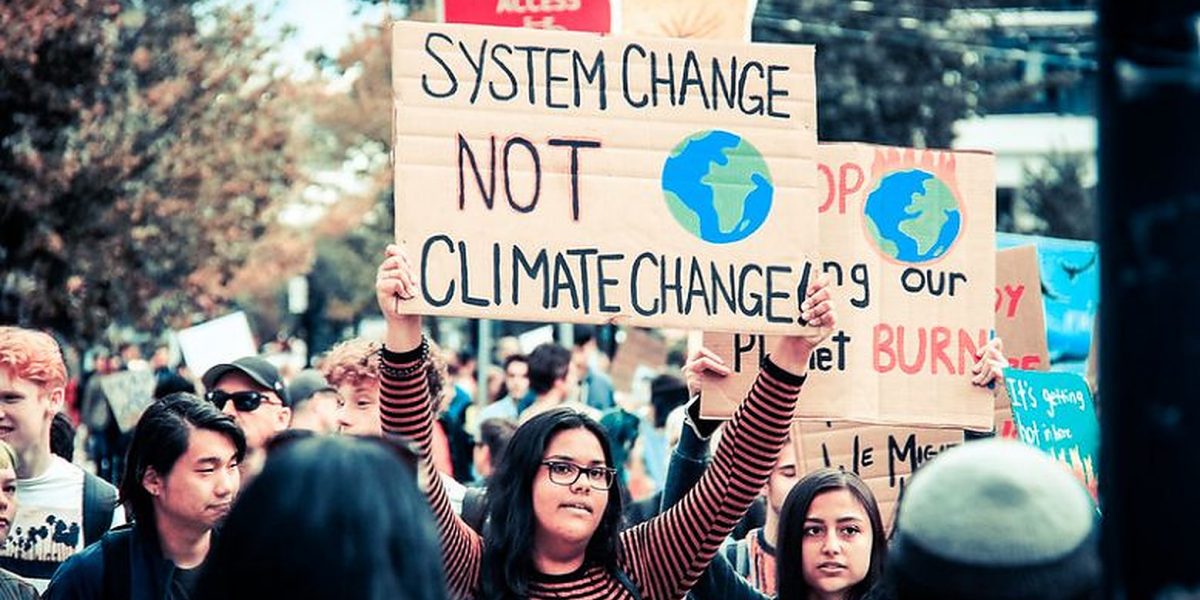 No doubt by now you are familiar with the United Nation’s Intergovernmental Panel on Climate Change (IPCC): if not from their 2018 report, which highlighted the need to remain below an increased climate threshold of 1.5 degrees Celsius, then certainly their newest report has come to your attention. Climate Change 2021: The Physical Science Basis, the title of the report, addresses the most up-to-date scientific understanding of the climate system and climate change.

In sum: it ain’t great. We are likely to reach our 1.5 degree threshold before 2040 if activities stay averaged, which would result in higher rates of compounding impacts, such as extreme weather events, drought, etc. Wet-dry severities are set to increase globally, greatly impacting island populations, and those populations who already face seasons of extreme heat and moisture. We have already hit some ‘pre-threshold’ markers regarding rising sea levels and destabilized weather patterns.

The report itself is so alarming that UN Secretary-General, António Guterres, has famously called this a “code red for humanity.” Something like a greatest hits for disaster, the report asserts that “[c]ontinued global warming is projected to further intensify the global water cycle, including its variability, global monsoon precipitation and the severity of wet and dry events,” and “[u]nder scenarios with increasing CO2 emissions, the ocean and land carbon sinks are projected to be less effective at slowing the accumulation of CO2 in the atmosphere.”

And this doom and gloom is very true. None of these scenarios looks good. Even under the report’s multiple pathways based around ‘socio-economic’ factors for populations, there is no solution offered outside of limited output and reaching net-zero by 2050. This carbon budget is around 500 billion tonnes of greenhouse gas. For context, Canada’s GHG emissions in 2019 was 730 megatonnes, or 730 million tonnes, with the US averaging about 2000 Mt less than Canada over the last few years.

Who is to blame?

Yes, this is a code red, but who is to blame? The report itself only discusses human-made or human-induced climate change. Equally, it only points to governments and “decision-makers” to make changes. Obviously, the paper doesn’t try to imply that a community garden effort which relies on car-sharing for members is equally to blame as Chevron or Exxon Mobil, but it certainly isn’t taking the challenge seriously, either. In the same statement as “code red,” António Guterres said: “If we combine forces now, we can avert climate catastrophe. But, as today’s report makes clear, there is no time for delay and no room for excuses. I count on government leaders and all stakeholders to ensure COP26 is a success.”

The takeaway from this report could lead many into a sort of individualistic despair. On the one hand, there are actions we can take everyday to reduce our personal carbon footprint. We can learn to repair our own items and devices instead of buying new ones, we can use just a whole bunch of paper and metal straws, we can buy garlic and broccoli rabe and from farmers’ markets. These actions are often reserved for those with the financial and geographic capital to do so, and do incredibly little to push for long-term, sustainable change.

COP26, the 26th UN Climate Change Conference of the Parties, will be the 16th meeting of the parties to the Kyoto Protocol, and the third meeting of the parties to the Paris Agreement. The Kyoto Protocol was a treaty drafted between world leaders and nations in 1997, of which Canada withdrew and has not re-entered since 2012. The Paris Agreement is a treaty adopted in 2005 to also reduce signatory countries’ GHG outputs.

I don’t think it requires any political intervention to see the particular problem here. For decades, global world leaders and industry have said they will save us all from climatic disaster through emissions trading, carbon taxes, investing in alternative energies, and so on. Not only do many of these tactics not actually work in terms of reducing GHG, it also supposes that the issue is something external to the everyday function of our economy.

For global political and industrial leaders, the solutions must be market-based. After all, we create so much wealth and ‘innovation,’ surely it can also fix the climate. The problem is the market itself. The problem is capitalism.

And so what do we do when our governments and corporations don’t listen? This is a massive question, and if there was already a set-and-agreed upon answer, we would be well ahead of where we are.

What is to be done?

We first need to understand that capitalism itself is at fault. Our individual ‘choices’ didn’t get us here, the system did. The extractive nature baked into capitalism makes it impossible for any meaningful changes to occur at the level or rate needed, not only to stop irreversible climate change, but also to do so in any equitable manner.

Marx used the process of metabolism to relate human interactions with the natural world grounded in materialism and political economy. Specifically, he examined this “metabolic rift” between capitalist modes of production and previous human-nature relations. “All progress in capitalist agriculture is a progress in the art, not only of robbing the worker, but of robbing the soil,” wrote Marx in volume 1 of Capital. He correctly pointed out that the capitalist mode of production is inherently destructive to the environment, not because all capitalists are Snidely Whiplash-types with evil lairs (although…), but because the varying weights of values in contrast to rates of profit require capitalists to eek out as much profit as possible while forcing these to come at the cost of fair wages, sustainable practices, indigenous sovereignty, and more.

Some might say that we can force governments to act on these needed changes. Certainly that’s what those at COP26 are hinging on, as well as those who look to our political institutions to do the right thing. The idea is that there are currently the ‘wrong’ people elected. Elect the ‘right’ ones, and our problems are solved. Or say they say. Despite the many examples of this never being the case, it is for the same reason as capital not being able to be green. Politicians might be at the front of the room, but it’s big business leading the way. Oil and gas companies carry at least $18 trillion in stock equity, representing close to a quarter of the global stock market. This means that they have the motive and means to lobby politicians, create think-tanks and fund their own research, and create campaigns to promote their own interests and silence opposing views. Because these problems are based within our socio-economic system, we can’t look for solutions within it.

Our strategy is one of a more ecologically sustainable future, yes, but that only can go so far. Any future we fight for must be one that centers decolonization, anti-racism, and all anti-oppressive ideologies. The emergence of capitalism as a global project is inherently tied to colonialism and racism, so it is impossible to fight on one front while ignoring or reducing the importance of others.

As written in the Combahee River Collective’s Collective Statement: “We realize that the liberation of all oppressed peoples necessitates the destruction of the political-economic systems of capitalism and imperialism as well as patriarchy… We are not convinced, however, that a socialist revolution that is not also a feminist and anti-racist revolution will guarantee our liberation.”

This strategy is informed by a variety of meaningful contributions that certainly deserve their own discussion: from the need to center indigenous resistance and leadership, to winning more workers to the fight for climate justice, and solidifying anti-racism at its core as well.

Onyesonwu Chatoyer wrote in Settler-Colonialism and Neo-Colonialism: “It is essential to struggle against and ultimately destroy internal class contradictions as they represent–alongside gender contradictions produced by patriarchy and colour hierarchies produced by colonialism–a point of weakness in colonized populations that can be exploited by imperialist powers seeking to divide and subjugate us.”

And with tactics as well, there are many discussions focused on which ones work best, accomplish specific goals, etc., and they all deserve their own thoughtful study that is outside the scope of this article. I’ve only briefly outlined an anti-capitalist strategy, which should inform tactics as being anti-capitalist as well.

“Of course capitalism continues to play a core role in dispossessing us of our lands and self-determining authority, but it only does so in concert with axes of exploitation and domination configured along racial, gender and state lines,” says Glen Coulthard in For Our Nations to Live, Capitalism Must Die. “Given the resilience of these equally devastating relations of power, our efforts to decolonize must directly confront more than just economic relations; they must account for the complex ways that capitalism, patriarchy, white supremacy, and the state interact with one another to form the constellation of power relations that sustain colonial patterns of behavior, structures, and relationships.”

The best way to gain any insight into the strategy and tactics needed for sustained climate action is immersion in political activity. Politically, we are being faced by multiple crises on all fronts. The system doesn’t have and can’t offer the solutions many are looking for, and so there is a sense of urgency in being able to make these links and connect these struggles in a meaningful way. The very nature of what these crises are and how they impact the working class is what should inform our activity.

What do we do next? I think the call for the next global climate strike on September 24th is a perfect example of a mass action that can help raise the profile of the climate crisis, certainly backed by the recent IPCC report and the climate chaos occurring around the world. But where do we go after? It’s not pessimistic to think that the one-day event on its own will not force politicians and industry to change their own activity, but an event on this scale can do a lot in terms of building unity and confidence that will hopefully carry forward to continued pressure and actions and organization. It’s one piece of the puzzle, but will be an important one.

Indeed, that a federal election campaign will be taking place at the same time as climate activists will be organizing, preparing, and mobilizing for the climate strike represents another opportunity to ensure that climate is front and centre on everyone’s agenda. And no matter who forms government on September 20, the climate strike just four days later will send the signal that it really is “code red for capitalism” and that the movement will not settle for more tinkering around the edges.

Beyond this year’s climate strike, and as we continue to deepen and expand the fight for climate justice, we always need to keep in mind what will make our struggle stronger and ready for the long-haul. When we’re organizing and building on political campaigns and in movements, we should ask ourselves: do our tactics build confidence or pessimism? Are we generating solidarity across groups and struggles, or just replicating a toxic mix of social capital and competition? We need to make sure we’re running with the positive aspects of these questions and challenging the more destructive aspects in ways that ultimately make people feel safe and welcomed into organizing spaces and in ways that will see more people take on actions forward and build the struggle as a whole.