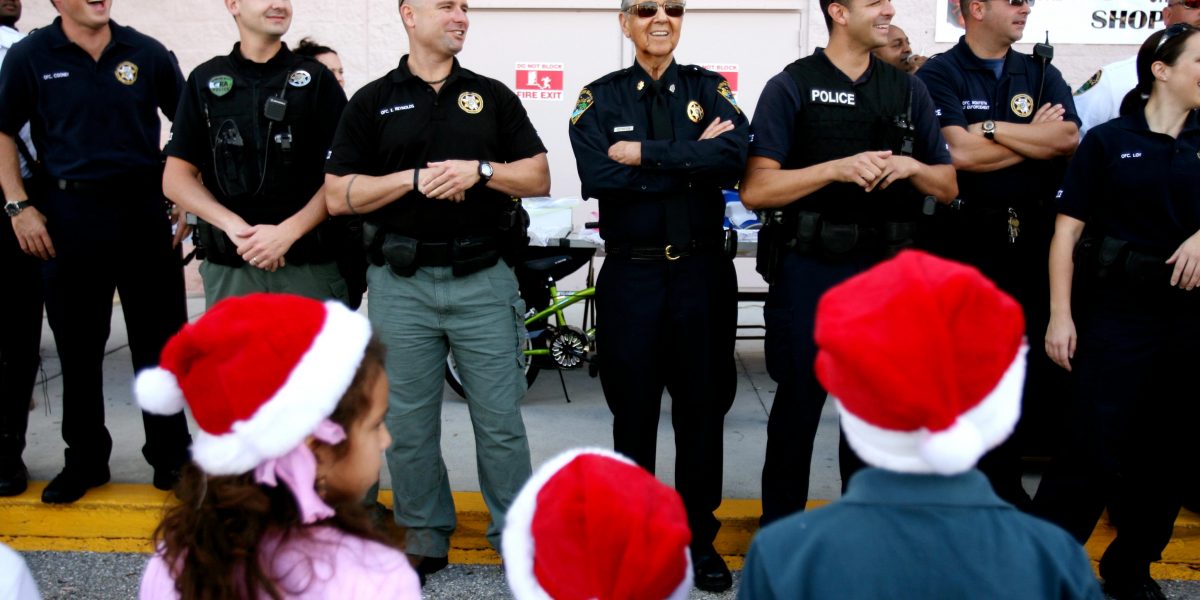 Organizations and individuals that target children in cynical and self-serving ways to build their own brand or to enhance their public image are rightly viewed with disdain. This disdain is heightened when groups try to mold or manipulate children, especially at young ages, into allegiance or commitment to those groups, their membership, and worldviews. Yet, these social prohibitions against such targeting of children seem to fall by the way when the group in question is the police. And police do this kind of prep work with youth all the time, in a host of ways, in various programs that bring together cops and kids.

In fact, “cops and kids” programs are a significant part of layered policing—the extension of police reach into aspects of everyday life, from school, to play, to community gatherings, in activities which are not, on the surface, immediately posed as policing. They can include sports teams, volunteer groups, and social outings. In these programs police are propagandizing children, denying or concealing the true nature of policing as violence, and presenting police violence as an exciting adventure and policing as a charitable endeavor.

The aims, even as police themselves sometimes reveal, is recruitment. Police are looking to identify, groom, and recruit new officers at a very young age. Other aims, rarely revealed in the policing language of “making community connections” are to build relations of trust and confidence with family members that can be turned into snitch lines in the community—always a goal of layered policing. This is all especially troubling given the power that police forces wield over communities, and can wield over children, their peers, families, and loved ones.

These programs receive too little scrutiny and are largely overlooked in studies of policing programs. There is a real variety of such programs, many of them running for decades. In them police offer a range of activities geared at enticing students across diverse interests. A number of them ramp up during the holiday season, taking advantage of children’s wishes and dreams of holiday cheer.

ProAction Cops and Kids consciously targets vulnerable youth. In their own words, the program is “delivered by police officers that specifically engage at-risk young people.” Founded in Toronto in 1991 by capitalist restaurant magnate John Bitove Sr, Cops and Kids brings together youth and police from several forces including Toronto, Durham, Peel, Hamilton, and Halton.

Cops and Kids runs a variety of regularly scheduled programs. They operate a number of sports teams and programs across a range of sports, including hocket, basketball, volleyball, and soccer. A big part of the sports activities is participation in the “Police Games”, which brings together teams from across the programs. They also run athletics programs, including yoga, snow games, boxing, and crossfit.

Ahead of the holiday season in 2022, Cops and Kids partnered with Hasbro, to build the official “Monopoly-Toronto Edition.” They are selling it for $69.99 to fund their programs.

The number of children that Cops and Kids has brought into close contact with police is substantial. So too are the numbers of police they have connected with children: “Since inception (1991), ProAction has reached over 420,000 young people through over 2,200 programs delivered in partnership with over 19,800 police officers across our four chapters.”

Cops and Kids makes it very clear in their About Us statement, that recruitment is a key part in what they do, and something they view as a successful outcome. “The skill-building aspect of many ProAction programs often leads to educational and career opportunities for the young participants. Many participants even become interested in pursuing a career in law enforcement due to the mentorship of the police officers leading the programs.”

It is important to emphasize that the programs, and their alleged benefits, are viewed from the perspective of police and policing. What are they as police able to gain from these close interactions with police. As Cops and Kids website puts it: “What our officers achieve with ProAction Cops and Kids: Strengthening relationships between police officers and youth; Building trust; Promote a positive image of police; stimulate personal development.”

Kids and Kops (in Kanada)

Cops love having summer camps with kids. There are numerous police camp programs run from police departments across the country. Kids and Kops is a summer camp in New Brunswick in which children aged 10 through 13 spend a week doing “simulations” of police actions. The camp runs for a week and targets youth “who are interested in law enforcement,” with a dozen young participants.

One of the police “activities” during the 2022 camp involved a mock police chase. Never mind that police chases in Canada often have deadly outcomes—including the deaths of pedestrians, passengers, and other drivers who were not targets of the pursuit. This reality is kept from the children, for who the chase is made to be simply something out of an amusement park. As one participant put it: “You definitely have to hold on tight because it would be wobbly and everything. It was really fun — like you’re on a ride or something.”

Other activities include a simulation of a police dog attack. Cops are downright gleeful about having a chance to subject children to this: “We’re chasing a bad guy, and as the week progresses, we’ll end up with a grand capture using a K9 dog and a track to capture the bad guy, and we finish off with going to court on Friday,”

Also note the stigmatizing language pushed on children by police in these activities. This suggests that the people police target are inherently evil. But police often chase or release dogs on people who have committed no crime or done no harm (consumption offenses, for example). Police violence also disproportionately targets racialized people, but rather than questioning police racism these exercises reinforce it—using “fun activities” to prep children to accept punishment of “bad people.”

These events give children a distorted and dishonest view of policing. They deny or downplay police violence and normalize police views on society and its dangers (bad people). All of this is predictable when you consider why police are doing it. As a report on the Kids and Kops program concludes: “Fredericton police are hoping that, one day, they will see the kids back in uniform.”

Holiday shop with a Cop?

In addition to ongoing programs that put police in contact with children, there are charities that devise “giving” programs built around police having contact with children. Not surprisingly, the Christmas season is an especially active one for these programs, targeting children while visons of sugar plums dance in their heads. These include police toy drives, in which police set up police cars to be filled with toys on specific days. They also include programs that pair children with police officers to go on Christmas shopping sprees for a day—so-called Shop with Cops events.

Among the most notable and longstanding of these takes place in Winnipeg. For almost two decades, the city’s St. Vital Centre mall has partnered with the Winnipeg Police Service (WPS) to take students from the Winnipeg School Division on a shopping spree—involving more than 60 students and officers take part in the event each year. The shopping trips are not assigned on a basis of need but by student showing academic and sports achievements, by having “a positive influence on peers,” and through volunteer efforts that “make a difference in the community.” We can only imagine what these particular things mean through a policing lens. Selected children are given $200 gift cards, which are donated by St. Vital Centre, and then spend a day out to “shop with a cop”.

One might well ask why children and their families are not simply given the donation funds directly and allowed to go shopping themselves. Well, remember, this is not about benefiting children in a spirit of giving—it is precisely about what the cops get out of it. And what they get is access to children and families to do a little layered policing. And of course, some free public relations management—copaganda. As Kyle Waterman, General Manager of St. Vital Centre, puts it:” We love the Shopping With Cops event. It’s all about strengthening the relationships in our communities. Building positive relationships with law enforcement should start at an early age and we always look forward to hosting Shopping With Cops to help facilitate that. We’re excited to once again work with the WPS, who have been excellent partners year after year.”

One police participant, Constable McIntyre, points out that Shopping with Cops has allowed police to build relationships that may last over the course pf decades. In his words: “It’s building relationships with the kids and students that don’t have that great of involvement with the police.” And this, then, is why children cannot go shopping alone, but have to police with them. It is a deeply cynical, and manipulative, approach, but one that can pay dividends to police forces looking to make inroads in communities while putting a little shine on their image.

Shop with cop events are held in cities across the country. Kingston Police have been holding such events for eight years now, calling theirs “Shop with a Cop.” Their Shop with a Cop program involves transporting children to the city’s Cataraqui Centre mall in a police vehicle. Once there they have breakfast at Starbucks with Kingston Police officers along with members of the Kingston Police Community Volunteers and Kingston Police special constables. The full range of layered policing. After breakfast they go out for a few hours on the shopping spree before police return them to school. The connection does not end there, however. It is police officers who later deliver the wrapped presents to the children ahead of the holiday break.

Kingston police, again, stress the benefit of the program in policing terms. And once more that benefit is initiating and building new relationships within communities. They say it is also about having “fun in the spirit of the holidays,” but police escorted shopping does not exactly speak of holiday spirit!

A gift for cops and capital

These policing projects provide opportunities for corporations to build and grow relationships with police forces. They open doors for interactions and further collaborations, while reinforcing police-corporate ties. While being bonded with cops, children can be bonded with capital. And it’s all tax deductible.

Police-aligned charities give corporations an opportunity to make political donations, ones that advance the interests of corporations, and still receive tax donations. Donations are not tax deductible where they go towards political work, but advancing the interests of policing, and property protection, is clearly political even if not formally titled as such. A charity that lobbies for more policing would not be a tax-deductible option for corporations. Here they can both fund police projects and receive a tax deduction.

A list of donors for Cops and Kids is a who’s who of Canadian capital. At the CorporateLevel ($25,000+) are Investigative Solutions Network, Scotiabank, and TD Bank Group. At the Corporate $10,000-$24,999 we find, Boston Pizza, CIBC, Coca-Cola, Molson Coors Canada, Motorola Solutions Foundation.

These projects raise similar questions as have been raised by police foundations in cities like Vancouver and Calgary. These foundations raise funds for policing, including equipment purchases, and add to police budgets in a way that is outside of city or provincial government records and oversight.

All I want for Christmas is to defund the police

Layered policing takes many forms. Hallmarks of these programs are partnerships with community, groups, non-profits, and charities. These can soften or downplay the impacts of policing while providing police with some public relations cover. The targeting of children in this way, and the pairing of activities that could otherwise be beneficial with policing is cynical and manipulative. They reek of preying upon children.

Such activities should be properly funded and resourced, and divorced from all police participation. Like so many other social programs, they might well be socially funded if we defunded police instead of giving them public resources to engage in copaganda.